Setzer Design Group announces the premier of “VL-58,” another futuristic design from its Vision Line series, which the renowned Burger Boat Company has selected as a statement of both companies’ plans for the future. 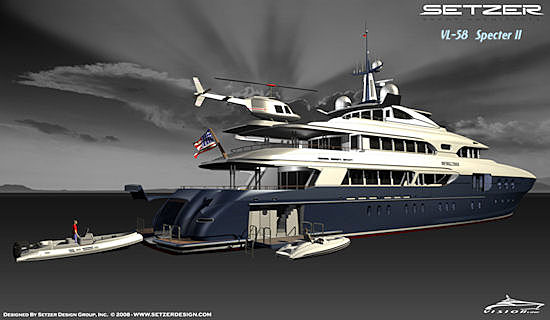 The new design, a 58-meter vessel, debuts as a streamlined expression of Setzer’s visionary superyachts and heralds a departure for Burger from its penchant for classic, iconic yacht styling: The modern four-deck superstructure is defined by long, clean lines and crisp edges and alcoves, complemented by interior styling and outfitting that is decidedly modern throughout.

With a beam of 10.5M and a draft of 3.1 M, the new vessel will include large, below-waterline holds and systems space. To provide around-the-globe travel in stylish luxury and comfort, it will accommodate a large owner’s party within five guest cabins, as well as an elaborate owner’s suite. Recessed hull-side balconies will be included within the forward hull-side of the owner’s suite. 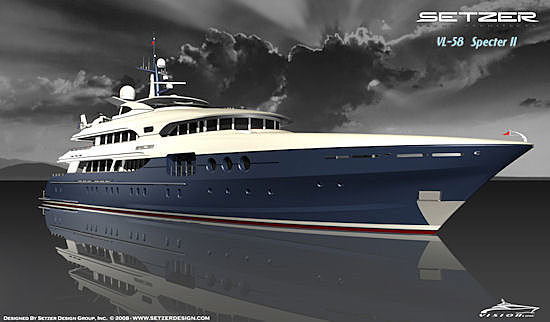 The superyacht’s design will be powered by a conventional drive system capable of extended cruising speeds of 15 knots. A large helicopter deck will extend above the sun deck, integrated to off-load tenders and toys, creating a spacious covered area for entertaining on the deck below. A cabana located aft, with dockage doors deploying port and starboard, will add to the vessel’s conveniences. A transom garage and launch-way will be integrated with a swim step.

The VL-58 will also feature a large theater, gym/spa, two galley areas, observation rooms, and more luxury amenities. The five guest cabins below deck will feature oversized port lights. The on-deck master will include his-and-her heads and walk-in closets as well as a nearby office/library. A large central stairwell will connect all decks to an enclosed observatory on the upper-most deck within retractable glass walls. Exterior seating areas throughout the superyacht will offer abundant space for dining and lounging in all climates.

Accommodations for a crew of 12 is situated forward in six cabins with a dedicated engineer’s cabin aft in the Lazzerette space. Additionally thecrew lounge, galley and utility areas, walk-in refrigerator and freezers, and storage holds are conveniently located forward. 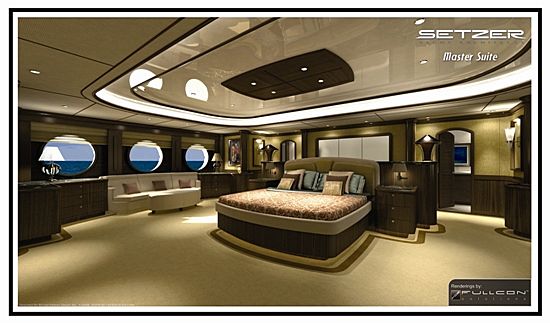 The VL-58 superyacht clearly speaks of the future while respecting both Setzer’s and Burger’s long histories of top-tier yacht design and construction. The new alliance between the two pedigreed companies demonstrates the strengths of both while advancing the state of yachting.