The Solent stage was set this Monday 9 July for the arrival of the Oyster fleet taking part in this great British yacht builder's 29th class regatta, hosted by the Royal Yacht Squadron and based out of Cowes Yacht Haven. 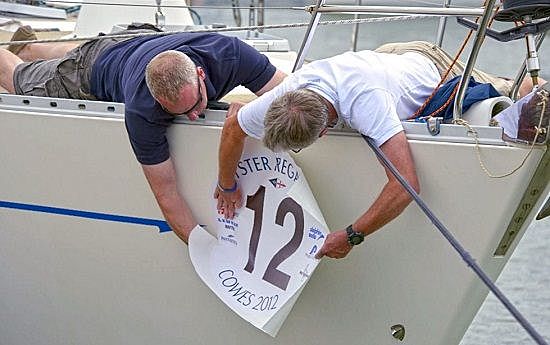 With four days of racing ahead, and it has to be admitted four days' of partying, this is after all a very convivial regatta, the 20 entrants spilled through the Haven's narrow, cross-tide entrance, with a particularly deft display by the biggest of all, the flagship Oyster 82 Starry Night of the Caribbean, piloting into the most awkward of berths with apparent absolute ease. Over the sea wall more mast tops showed and by mid-afternoon the fleet was in and the preparation for the Concours d'Elegance began. A voluntary, light hearted affair with as much joshing as judging, the Oyster shore team set to work, jumping from boat to boat, avoiding the bribes from beers to, well, we'll leave it at that! 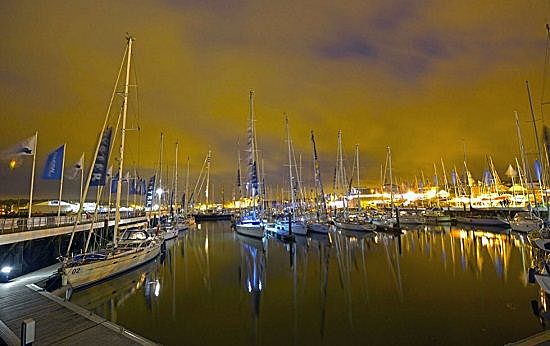 And it's interesting to see how well the fleet looks. Fresh launches such as Charles and Nicky Manby's brand new, perfect pale-grey hulled Oyster 575 Isis of course shone. "She's done just 300 miles and only about 50 under sail so far," said Charles, "but she's already shown she can handle a Force 8 in comfort in the Channel, so she's doing all right."

Elsewhere, 11 years of age, the Oyster 49 Tenens Spirit sailed by the extended Morris family, headed by brothers Peter and Bill, is in good form too. At first thinking they might duck out of the Concours, "I think we've a bit too much to do," laughs Peter, "she is an old lady, you know." Minutes later she was ready. Pro rata length she perhaps has the biggest crew pool. "16 in the house from three-years-old up," says Peter, " this is just such a great family event, we bring as many as we can!" Eight on board is the likely daily order, though.

On opposite inner and outer pontoons lie the two yachts most likely to claim furthest passage to the event. 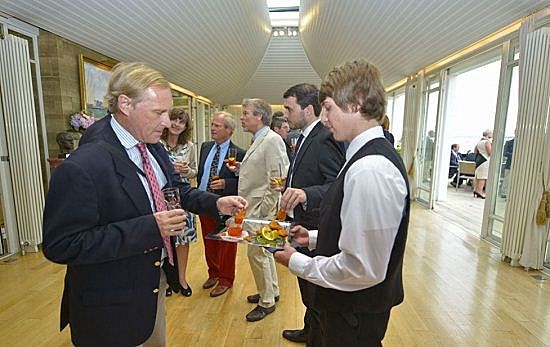 On the outward limit, Oyster 55 Boysterous of Inverness, bought last year by Jon Suller who has given her a new berth on the Clyde. "We sailed down with three on board, took a week in just about every kind of condition through to Force 7." And is he pleased with his new purchase? "It's a life's dream. I've had other boasts but I always dreamt of an Oyster. And here I am now with an Oyster at an Oyster regatta. It couldn't get any better!" With more crew coming on board for the racing, who knows, there's always the possibility of a trophy! 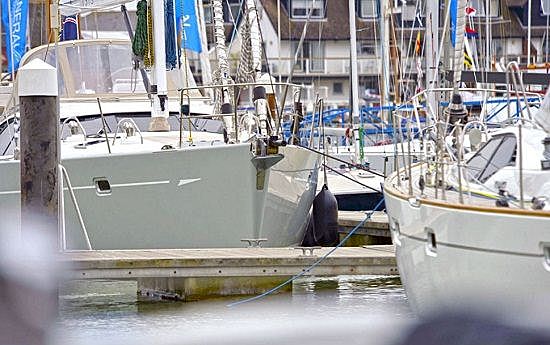 In the skipper's briefing Oyster CEO David Tydeman, who earlier arrived in Cowes in true corporate fashion aboard the Oyster 54 Legend, welcomed the fleet with a special mention of the other challenger for furthest travelled contender, the splendid two tonner Oyster 41 Prince de Petarcq, drawn by Stephen Jones and an elegant reminder of Oyster's more race oriented days in the late 1970's/early 1980's. 30 years old, Prince de Petarcq has been sailed across from Belgium by Bert Janssen and crew to compete and is clearly one to watch. Arriving early, she enjoyed a warm-up in the shape of the J P Morgan Round the Island race, coming in a healthy ninth in class in blistering conditions. We'll maybe see her first home some days in this event, but the two tier handicapping system of electing white or downwind sails day by day according to bias means with corrected time the racing is open to all comers.

But back to the conviviality of the first evening, at a pleasant cocktail party in the Squadron's marvellous pavilion followed by buffet supper for all the 150 owners and crews, family, friends and officers of the club, whose Commodore, Michael Campbell, warmly welcomed the Oyster fleet back for the fourth hosting of this fine Oyster Regatta.