The latest superyacht design from British based studio Andrew Trujillo Design is the Supermarine 36 Thunderbolt, a project that came to being following a conversation between Andrew Trujillo and the director of Ross-Smith Marine, Rod Ross-Smith.

Inside, her v births can swiftly be converted into a luxurious double bed, and she accommodates up to two in total. Within the design, ample storage spaces are found, including a full length wardrobe and convenient overhead cubbies. She boasts panoramic views from her portholes and star vistas are always possible from her skylights, featuring LCD dimming/shielding in place of a blind. 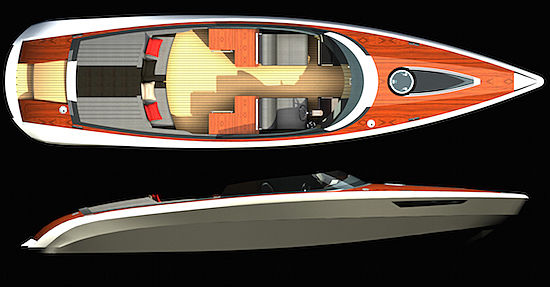 Talking of his inspiration behind the design, Trujillo says, “I have long admired the fast runabouts that mainly emerged in the US after the first World War, built to be raced, with a few examples made for pleasure. Many of these craft were built out of mahogany and a number of them used decommissioned Aero Engines. The wooden runabout boat then became more popular after WW2 with well known examples from the US being made by Chris Craft etc. and in Italy by Riva. However, the original concept of a very fast pleasure craft seemed to me to be lost along the way.

“When the project began I chose to reconnect with that original concept, and Ross-Smith Marine with their long established connection with Adam Younger designed hulls seemed perfect. Ross-Smith Marine had a hull that had already been built and tested which was capable, depending on the choice of the engine, of speeds in excess of 70 mph.”

Trujillo continues to further explain the thinking behind the design, saying, “I wanted also to use modern composite production techniques, but at the same time make clear reference to the original fast runabouts, visually. So the boat needed to be retro, but also be modern.

I have therefore aimed to keep her lines clean and uncluttered. Her deck fittings will be flush and she will have a glossy wooden deck, which serves as a connection with yesteryear, but which is made using modern production techniques and resins. Her sun loungers, set above the engines are also set flush with the deck. Small details, such as the engine intakes and vents will be made of flush polished stainless steel parts.”