Courtesy of Colin Baldwin, CEO of RIB-X who builds custom superyacht tenders, I was travelling around the course on Day 2 of the Superyacht Cup between the fleet at 56 knots! This enabled us to follow both Classes in the race perfectly and I also benefitted from Colin’s superb knowledge of the Solent and the tricky tides. 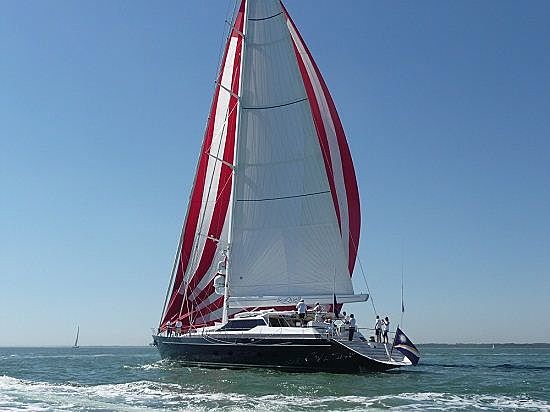 Both Class 1 and 2 had been given a ‘sausage’ shaped course due to the postponed start, Class 1’s mark a mile further on. The second Pursuit race of The Superyacht Cup saw Seaquell set off first, hoisting their Spinnaker early, spilling the wind until crossing the line, as did many of the fleet on the westerly reaching course towards The Needles. Bare Necessities encountered a small problem with the hoist, sending a man up the mast to ensure the sock was fully up. Drumfire had the best start of the day from the pin end, looking extremely slick with their well-rehearsed crew.

Athos and Savannah had reasonable starts, choosing to bear away along the start line until their start gun went before hoisting their spinnakers. Adela on the other hand came screaming up to the start with their spinnaker already up. Savannah and Mari Cha III chose the mainland end of the mark following Drumfire’s tactic, as opposed to the other yachts that had already set off. 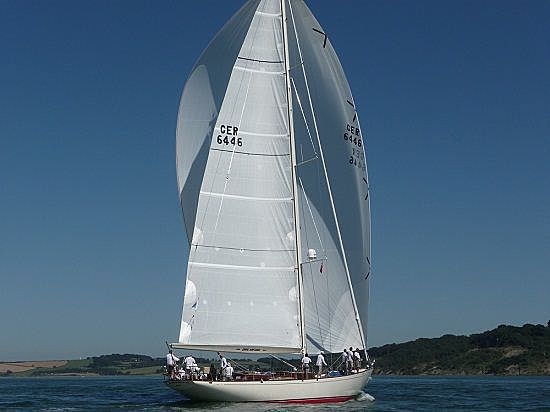 Much anticipation was on Hamilton before the start to see how she would perform after the extremely light airs on Day 1, with slightly more breeze on Day 2. Unfortunately she encountered a small problem with the spinnaker hoist, as it knotted but thankfully for them, and not the rest of the fleet, the problem was resolved quickly and once filled was a remarkable sight as she hunted down all those ahead of her! Hamilton chose the Island side, whilst Leopard 3 hoisted their spinnaker 40 seconds prior to their start gun, crossing the line at full speed in the conditions that were on offer. 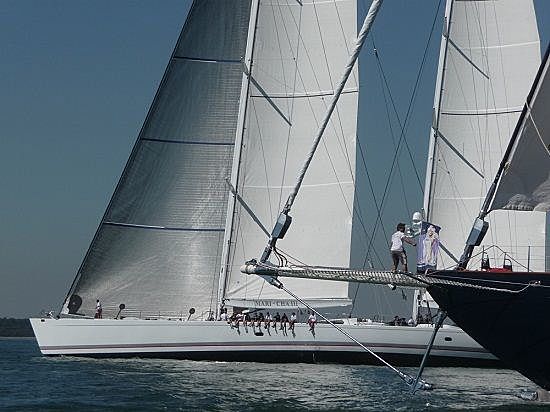 Now all the yachts had started, an enthralling race of tactics and gambling played out in front of us around the narrow course in the Solent, some of the yachts restricted by as much as 20ft (6.2m) of draft in strong tides and gentle breeze! 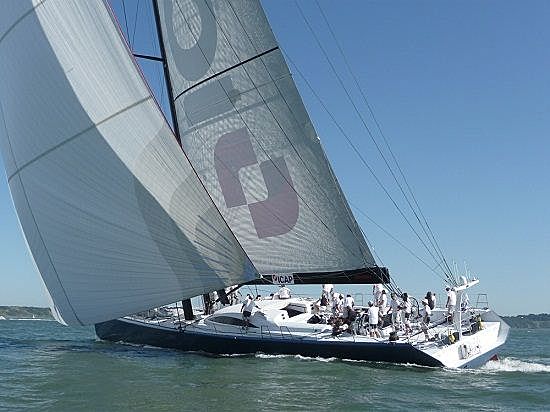 Athos gybes, choosing the Island shoreline with Adela following suit, catching up quickly on a superb first leg. Behind them, Mari Cha III chooses the mainland, as does Leopard 3 however she encounters headsail problems which by the first mark would cost them almost half a mile on Hamilton who rounds it ahead, as the leader of the Class 1 fleet. 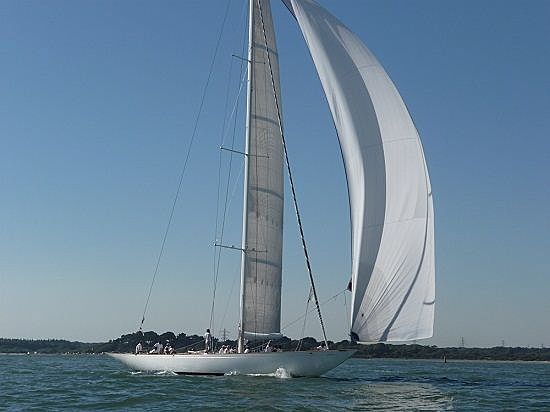 As both classes neared their first mark, the wind shifted to a more easterly direction meaning a change in their predicted tactics, back down the Solent to the finish line opposite The Royal Yacht Squadron. Heartbeat led Drumfire, followed by Bare Necessities then Savannah, Adela, Seaquell and Athos. With the tide rushing towards them, Heartbeat chose the mainland side of the channel, whilst Drumfire gambled to cross the Solent hoping for a back-eddy (where the current doubles back on itself and actually flows in the opposite direction) close to the shore with her shallow draft to pay off despite the possibility of a wind shadow from the island. If the wind were to hold, she would have been laughing however sadly for her she couldn’t quite come in close enough to the shore because of the wind shadow from the island and therefore did not benefit as she would otherwise have done. 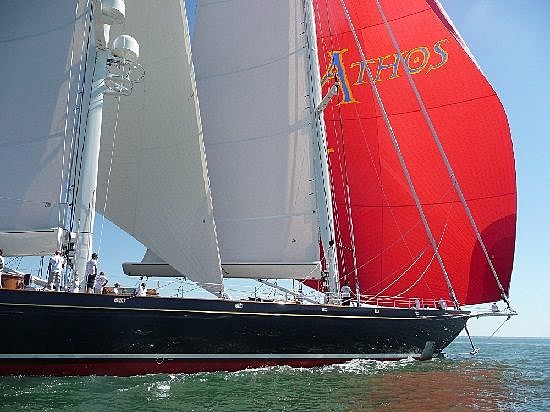 The rest of the race spotted Drumfire’s misfortune ahead, the lighter yachts hugging the mainland shore, whilst Athos and Adela used their great ballast to their advantage, ploughing through the tide at times, opting for a shorter route to the finish line. Bare Necessities were having a great day, benefitting enormously from the local boys onboard, keeping up with Heartbeat who was trying desperately to break away. Then Athos decides to head towards the mainland shore, catching Adela unawares, what a comeback after Adela’s early take-over down the first leg! 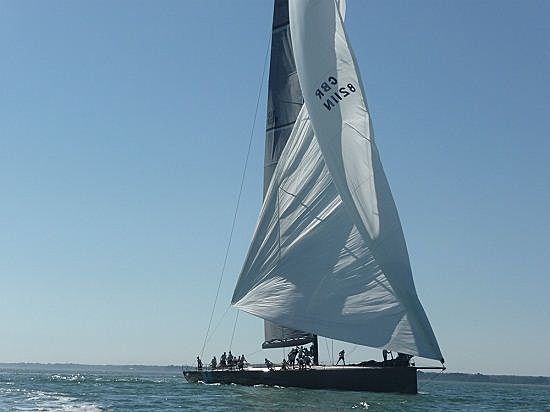 Due to the positioning of the first mark, Class 1 had no choice but to race down the mainland shoreline, Hamilton really shining in the conditions, and Leopard 3 close behind tracking her every move. Hamilton gybes, Leopard 3 gybes, Hamilton gybes, Leopard 3 gybes etc. etc. – match racing at its best! Mari Cha III’s advantage on the start line did not seem to be enough as her distinct Dragon logo across her enormous spinnaker faded further behind; she needed another 5 knots of breeze to really race at her best. 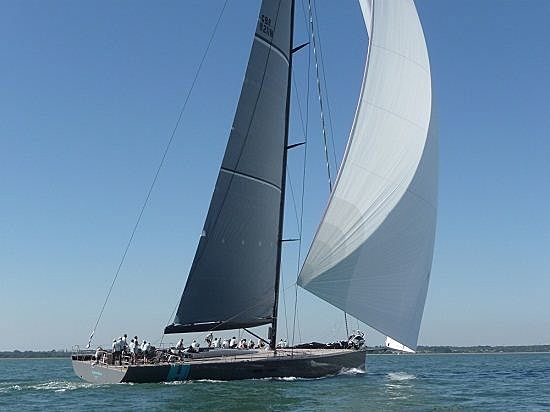 As Hamilton, followed by Leopard 3 caught up with Class 2 around one mile from the finish line, the race had come to a nail biting close! Hamilton opts for the northern end of the finish line, so with nothing to lose, Leopard 3 crosses the tide and starts gunning towards The Royal Yacht Squadron end of the line! She’s catching, is it going to pay off?! Not quite! Hamilton takes it in a glorious performance for crew and spectators alike. This was their 6th day of sailing together, well done! 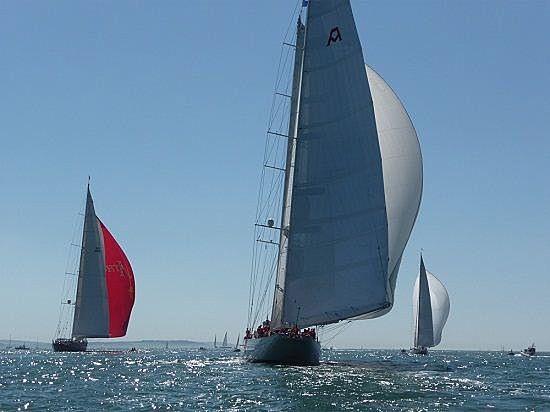 As the tide strengthened, those in the fleet with smaller sail area and lighter ballast struggled to hold on, as Athos crossed the line next. A fantastic effort and their celebrations onboard said it all, they were delighted to have beaten Adela who had got the better of them in Falmouth just a couple of weeks ago. Then in a perfect climax, the fight was on between Unfurled, who had excelled on the first day winning by a large margin, and Adela. Shadowing each other’s every move; they chopped and changed in position right up to the finish line where they were just metres apart abeam, the gun sounded twice in quick succession – less than a second – too close to call from where we were sitting in the RIB-X, which was sitting on the finish line! Unfurled literally pipped Adela to the post! What a day, and what a privilege to see these beautiful yachts race against one another in a competitive but friendly spirit.