Growth is attributable to traffic growth in Phuket (winter season) and very notably to the F1 GP, which provided a very significant pull. It is estimated that 14 superyachts made a specific effort, in varying degrees, to be in Singapore for that very F1 weekend. This is well above our initial expectations. From the SSA perspective, this was a real success for the industry. From a marina standpoint, 20 superyachts were berthed at the same time, pushing superyacht berth occupancy to a historical high of 69% (for 29 superyacht berths).

However, the Volvo Ocean Race (Late December 08) had no direct impact as yet. Nonetheless, thanks to the positive PR and word-of-mouth generated within the sailing and yachting community, the Singapore leg of the Volvo Ocean Race is expected to have very good long term benefits, promoting Singapore as a very entertaining and enjoyable place.

Another interesting trend is the significant increase in the number of superyachts making Singapore their permanent home. That number grew from 9 to 12 in 2008. However, growth is not imputable to Singaporean purchasing new superyachts but more to foreigners (and mostly Permanent Residents) either purchasing or relocating their yachts. Out of the 54 Asia-based but non Singapore-based superyachts, Singapore attracted 20% of them in 2008. Actually, if we take out superyachts with a relatively low level of mobility (for example just doing chartering in one region or yachts known for never moving), that percentage could be notably highly, circa 25-30%.

Superyacht Highlights:
Though many superyachts do not like publicity (this is why specific names of yachts and /or of their owners were not mentioned in this report), there are many that deserve to be mentioned and even some that crave of it. So, in the limit of what SSA can actually divulge, what were the 2008 highlights?

Kalizma: there a few superyachts that are part of history. Kalizma is among the most iconic of all. Built in 1906 by Ramage & Ferguson in UK, she is 165 feet long, has elegant lines, a classic clipper bow and an unmistakable counter stern. She was one of the most beautiful steam yachts of her times. In the course of her long life, she served in the army (twice), changed owners (several times), design (just as often). Her raise to fame came in 1967 when Richard Burton presented Elizabeth Taylor with the yacht as a prize for his Oscar-winning performance in the 1966 film “Who’s afraid of Virginia Woolf?”. Indeed Kalizma was named after Kate, Liza and Marie, their three daughters. Kalizma became a famous place for partying, quarrelling, divorcing, reconciliations, partying, marrying back before divorcing again. Richard & Liz. Liz & Richard. What a story. In 1995, Kalizma was acquired by Vijay Mallya (chairman of United Breweries Group) and painstakingly restored her to become the jewel she is today. Kalizma is now available for charter cruises in the region. For more information, visit www.mykalizma.com

Galaxia: Built by Perini-Navi (Italy) in 1997, Galaxia is another incredible yacht. Galaxia is a 171-foot long maxiyacht. She is big. Real big for a sail yacht. Just imagine a normal sail yacht totally blown up out of proportion. The towering mainmast is 48 meters high! A very intimidating yacht, indeed, but so beautiful at the same time. 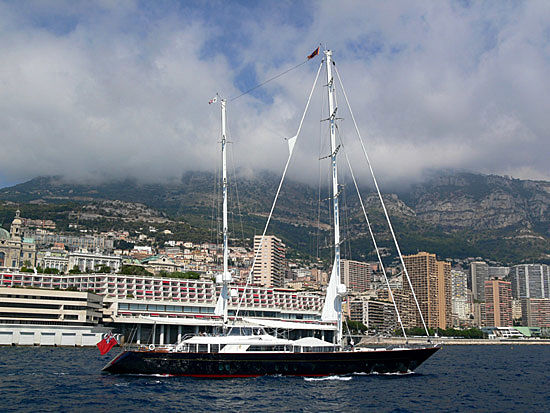 Moecca: Moecca is an extremely large catamaran motor yacht built by Oceanfast yachts (Australia) in 1992 and refitted in 2006. She is 147 feet long and offers huge deck and entertainment space. Moecca has been cruising the region for charter for the last 12 months. Is she beautiful? In her own way. Is she impressive? Yes. Is she comfortable? Definitely. Of course, at Euro 200,000/week (indicative rates), the best in life comes at a price… 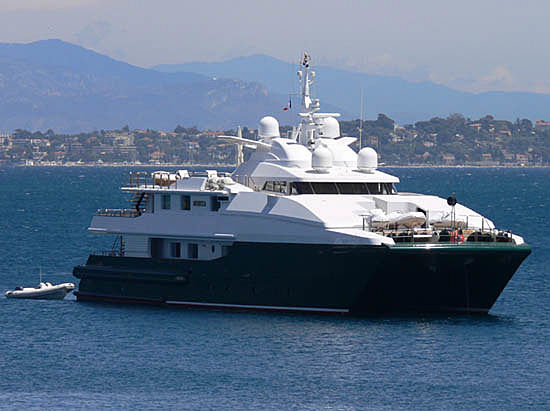 Comments from the industry:
Robert Bird, CEO, Raffles Marina: “2008 was a good year for Raffles Marina as far as superyachts is concerned, reflecting the overall growth in visitation to Singapore. We saw good growth over 2007, the second half of the year being particularly strong. We are fortunate to benefit from the presence of two ‘resident’ superyachts (“Asean Lady” and “Lady D”) and a couple more ‘long stayers’ who make Raffles Marina their home. superyachts provide us with a useful income stream whilst bringing a certain prestige to the Club, they also provide revenue streams and work opportunities for many other people connected either directly or indirectly to the boats themselves. We are hoping for even better things in 2009!”

Simon Turner, General Manager, Simpson Marine (SEA) Pte: “The traffic growth in Singapore and the region is very encouraging. It not only shows that the increase in visiting yachts from around the world prove that we have the facilities to support them, but also it is giving confidence to locals to own large yachts safe in the knowledge that they can enjoy unique experiences for both corporate and private usage. The Formula 1 Grand Prix, Volvo Ocean Race and forthcoming Integrated Resorts have opened the minds of locals to a new, vibrant Singapore at the centre of some wonderful cruising grounds. My enquiries for large yachts continue to increase and we take a consultative approach to private and corporate solutions. I’m not sure this will quite turn Singapore into the Monaco of the East but its certainly becoming a vibrant marine leisure centre.”

David Brightling, General Manager, ONE°15 Marina Club: “2008 saw continued growth in both the number of superyacht visits and their duration as skippers and owners increasingly recognize the advantages to a Singapore port stop. Of course, some of the visits were related to major international events like Formula 1 and the recently completed Singapore Stopover of the Volvo Ocean Race. But many are attributable to the city’s outstanding transportation, healthcare and business infrastructure which make it a strategic port of call for those cruising in the region.”

2008 conclusions:
To conclude with the year, 2008 was an extremely positive year for the Singapore Superyacht Industry. Overall, with a 93% traffic growth year to year, the Superyacht industry in Singapore could possibly be one of the best performers of all industries in Singapore.
Important observations:
1) Singapore superyacht marinas are far from full occupancy. Even at its peak, occupancy was only 69%. If the same occupancy was applied across the year with superyachts coming in and out, traffic could be above 150.
2) Singapore superyacht marinas have each carved a niche for themselves, attracting quite a different clientele.
3)Singapore first ever F1 GP boosted traffic in September. Will we see the same level of excitement in 2009?

2009 targets and beyond:
In spite of the economic downturn, SSA believes traffic can hit 80 unique superyachts in 2009, equivalent to a 60% year-to-year growth.

The business growth implies that the Singapore Superyacht Industry will have to upgrade further its facilities and its service level. Furthermore, significant private investments will need to be poured into the development of supporting services. SSA is actively working the relevant Government bodies (EDB, STB, MPA) to facilitate such developments.

Of course, 2009 and 2010 may prove more difficult than expected as the current financial downturn has no precedent in the industry and it is extremely difficult to predict how the meltdown is directly affecting cruising decisions or overall expenditures for the next 36 months. However, what we do know, is that even if dramatic new-build order cancellations were to follow, there is still not enough superyacht berths in the Mediterranean or the Caribbean for the existing superyacht population, not to mention upcoming superyachts (200 to 300 new launches minimum in the next 24 months). In short, in a depressed America and Europe, it is difficult not to imagine that more and more traffic will trickle down to Southeast Asia and Australia to find solace and discover new adventure grounds.