Home > News > The Top 20 largest yachts ever built in Germany

We take a closer look at the twenty largest superyachts ever built in Germany, with the largest being 180 metres long, the 'smallest' and mere97 metres long. Lürssen takes the lead, with 11 of their yachts making their way into the Top 20, followed by Blohm & Voss with 4 deliveries, Bremer Vulkan with 2 deliveries, Peters Schiffbau, Lubecker Flender Werke and Lloyd Werft round off the list with one delivery each. 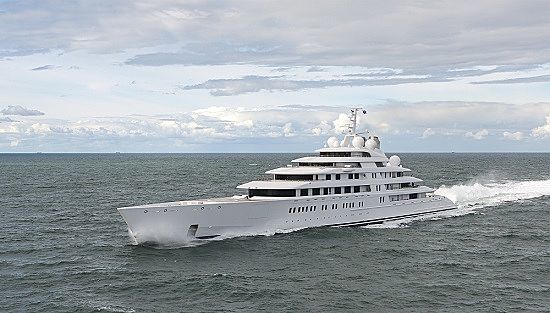 Lürssen has delivered Azzam on 22nd October 2013. In addition to being the largest yacht in the world with a length of 180 meters and with a top speed of over 30 knots she adds another record in terms of building time: less than three years from steel cutting following one year of engineering. 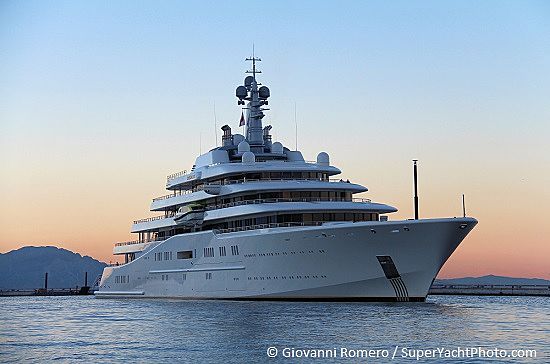 At 162.5 metres,Eclipse can accommodate up to 36 guests, and a crew of 100. Some of her features include a swimming pool on the main deck aft, covered by a glass ceiling, and a log burning fire table on the upper aft deck. 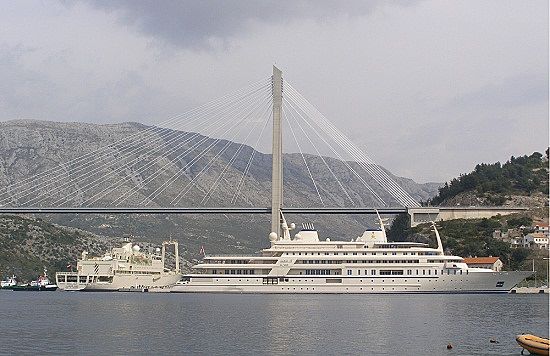 Al Saidmeasures 155 metres, making her theworld's fourth largest yacht. She belongs to the ruler of Oman, andis seen in this photo together with her 136 metrededicated support vessel Fulk Al-Salamah. 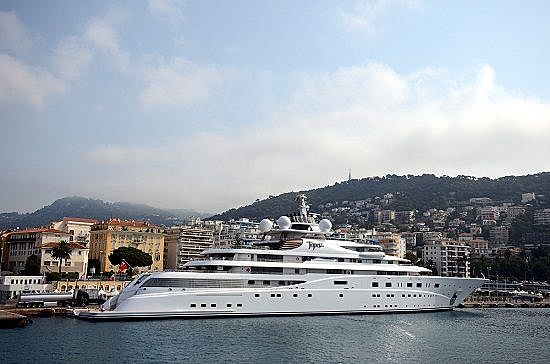 SuperyachtTopazhas a length of 147 metres, beam of 21.50 metres and a gross tonnage of 11,589.Sheis designed by Tim Heywood and ranks as the 5thlargest yacht in the world. 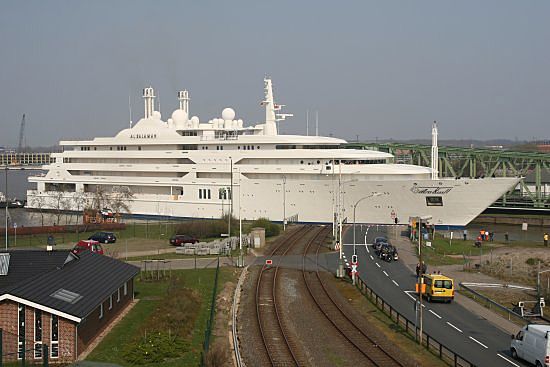 The 139m (457ft) Al Salamah is designed by Terence Disdale, and was delivered to the Saudi Royal Family in 1999. Although unconfirmed, rumours are that the yacht changed hands in 2013, but has kept her original name. 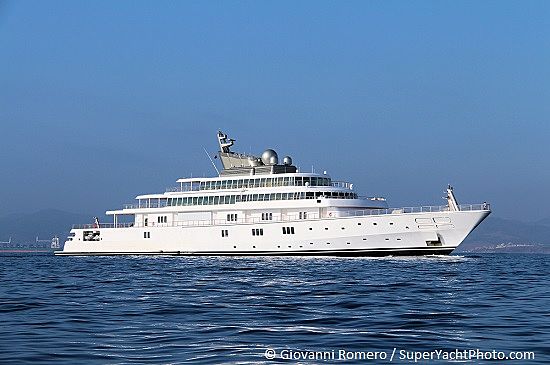 The 138 metre Lürssen superyacht Rising Sun, was delivered in 2004 and was one of the last creations of superyacht design legend Jon Bannenberg. She was built for an experienced owner, Larry Ellison.Four MTU diesel engines and quadruple screw propel the yacht up to an impressive speed of 28 knots. You can get an idea of what Rising Sun looks like inside,by havinga look at the article we did on Musashi, their interior styles are very similar looking. 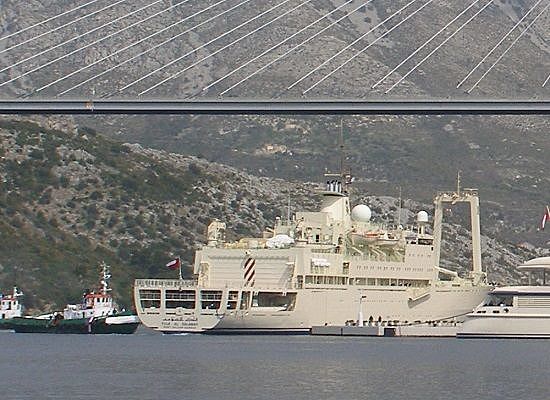 Technically speaking, this isn't really a yacht, but rather a support vessel to another, even larger yacht.Fulk Al Salamah belongs to the ruler of Oman, and is the support vessel to the 155 metre superyacht Al Said, number 3 in this list. 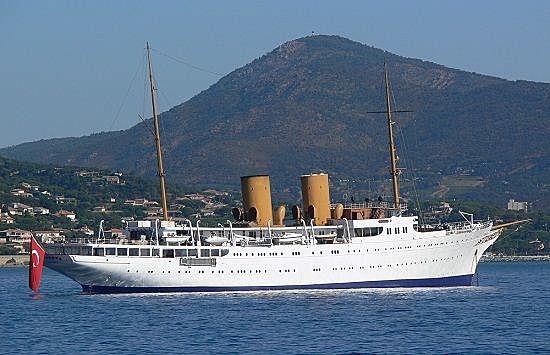 The 135.95 metre Savarona wasbuilt in 1931 by Blohm & Voss for Mrs. Emily Roebling Cadwalader,at a cost of $4 million, a huge figure in those days. In 1938 she was purchased by the Turkish government and was presented to Mustapha Kemal Atatürk. In the late eighties Savarona's faith was uncertain, and shewas laid upto be scrapped.A Turkish ship owner saved her, andcompletely restored her. Donald Starkey Designs were involved in the refit, andcreated a highly luxurious interior. Amongst her many new features were an 80 square metre Turkish hamam, made out of 65 tons of marble. To give you an idea of her size, her sun deck alone measures 550 square metres, and there is a 300 square metre aft deck. 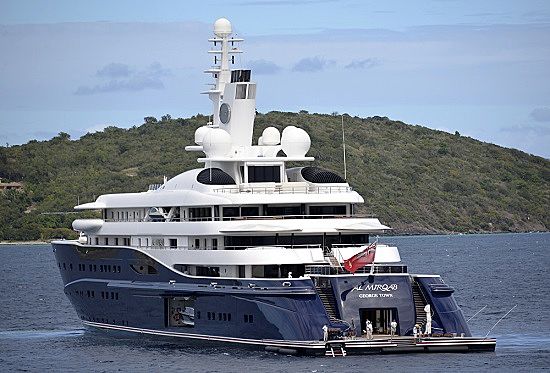 Al Mirqab is133 meters long, was built by Peters Schiffbau, under the supervision of Kusch Yachts, with exterior styling by Tim Heywood and interior design by Andrew Winch. Only a handful of interior images have ever been published, which show a highly ornate interior. Owned by a Head of State, the yacht is kept very private. 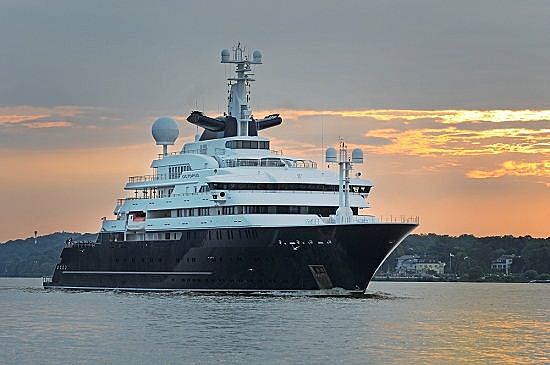 The 126.20 metre superyacht Octopus, was built by Lürssen in 2003 to a design of Espen Oeino International and features aninterior by Jonathan Quinn Barnett. She has a cruising speed of 17 and a top speed of 20 knots. Octopus has a large swimming pool on her bridge deck, acinema,a basketball court, two helipads, two mini submarines and just like in one of the owner's other yachts, the 60 metre Feadship Meduse, a sound recording studio. 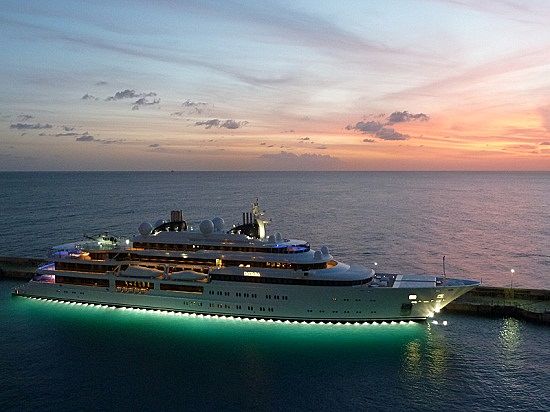 Katara was the deliveredby the German Lürssen shipyard in 2010. The Qatari flagged superyacht ranks as the 14th largest yacht in the world. She was designed by Monaco based Espen Oeino International. The interior of Katara is designed by Alberto Pinto, but it's being kept a closely guarded secret. Katara, Lürssen hull number 13656, has a top speed of 20 knots. 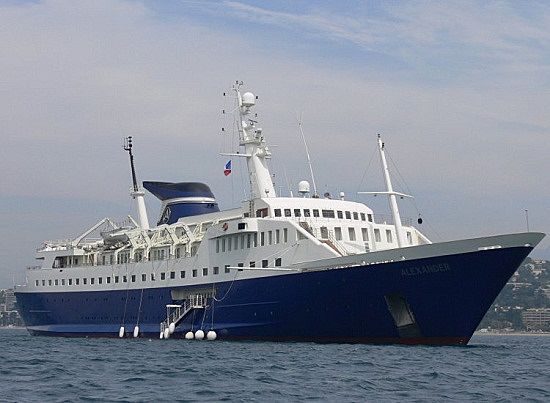 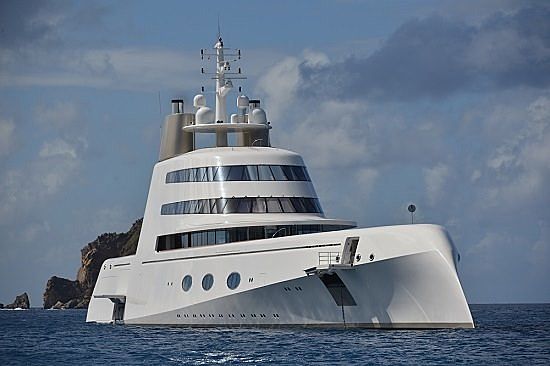 You either love her, or you hate her, but one thing is for sure, few yachts in the world are as extraordinary as superyacht A,designed by Philippe Starck. Shemeasures 119m long, and is powered by twin 6.035hp MAN RK280 Diesels, providing speeds up to 23 knots. At her top speed, she has a range of 4250nm. Her long foredeck houses a large glass fronted rectangular swimming pool, and her aft deck features a second massive pool. A third and fourth Jacuzzi are located aft on her bridge deck, and on her topdeck. There is even a Jacuzzi inside the main saloon. By the way, we love her! 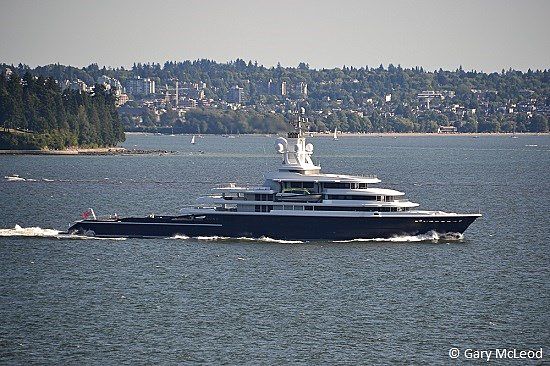 Luna was delivered in 2010 to her well known owner, who also onws superyachtEclipse. Luna measures 115 meters and was built at the Lloyds Werft in Germany, to a design by Newcruise.One of her specialfeatures isher over-sized aft deck, that features alarge swimmingpool. Luna is used a lot, she has been spotted around the globe by many of our readers. 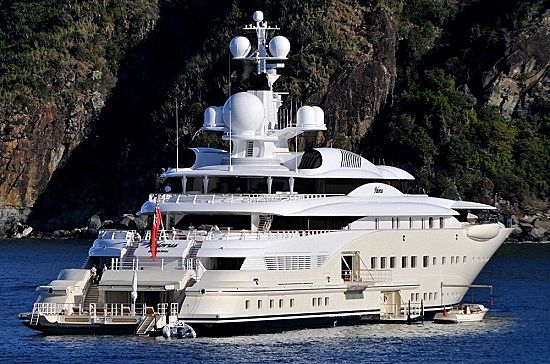 The 115 metre LürssenPelorus is designed by Tim Heywood and features an interior by Terence Disdale. Pelorus was built for a Middle Eastern owner who sold her to a well known Russian owner, who is his turn sold her in May 2011 to her current owners.Pelorus is powered by twin 5.300 hp Wärtsilä 12V26 engines, and has a top speed of 20 knots. Cruising at 16 knots, her range is approx 6000nm, on 280.000 liters of fuel. She has an impressive gross tonnage of 5317 tons. 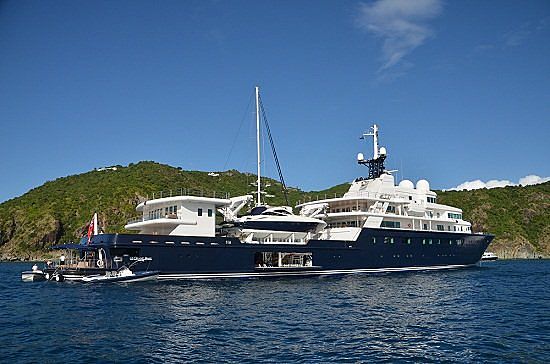 Le Grand Bluewas built by Bremer Vulkan in Germany to a Kusch Yacht design. Since her construction in 2000 she has enjoyed the ownership of a host of famous and influential people. Her interior, parts of which are designed by Bannenberg & Rowell Design,ensures that the 20 guests onboard are accommodated in absolute luxury. Placed on the large aft deck is a 22 metre Dubois designed sailing yacht as well as a 21 metre Sunseeker motor yacht, a very rare complement indeed. In addition to the helicopter landing pad, Le Grand Bleu features a 60 knot high-speed boat and an array of other water sports toys and exploration gear. 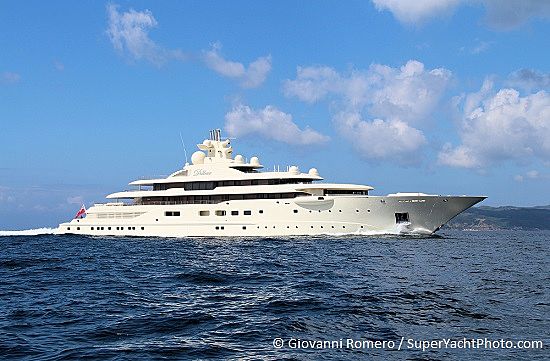 Dilbaris a 110 metre Lürssen, builtin 2008 to a design of Tim Heywood and with an interior by Alberto Pinto. Dilbar is a close sistership to superyacht Pelorus and Radiant. She was the first yacht in the world with particle filters on the main engine exhausts. She has a combined diesel mechanic and diesel electric propulsion system with exhaust gas particle filters for all the generating sets and for the main engine exhaust at lower power. 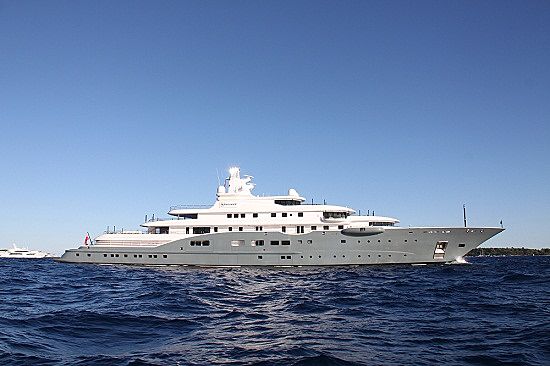 Radiant, one of the largest yachts launched in 2009,was built bythe Lürssen Shipyard in Bremen. She has a length of 110 metres and has an exterior design by Tim Heywood with an interior by Glenn Pushelberg. Whilst the yacht was under construction, she was sold to her current owners, who previously owned an Amels, with the same name, now called Lightning. Radiant is kept very private, no images or details about her Yabu Pushelberg styled interior have ever been released. She is a close sistership to Pelorus and Dilbar. 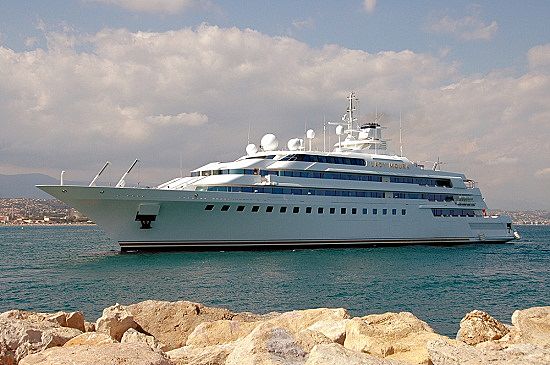 The105 metre Lady Moura was built in 1990 by Blohm & Voss, andwith a beam of18,5 metre, is amongst the beamiest yachts in the world.Lady Moura is powered by twin 6868HP Deutz-MWM TBD510BV12 diesels, giving her a speed of more than 20 knots. Naval architecture for the yacht was done in house by Blohm+Voss and her interior was created bythe Italian designer Luigi Sturchio. To date, the interior of Lady Moura remains a closely guarded secret, but is believed to be amongst the most opulentin the world. 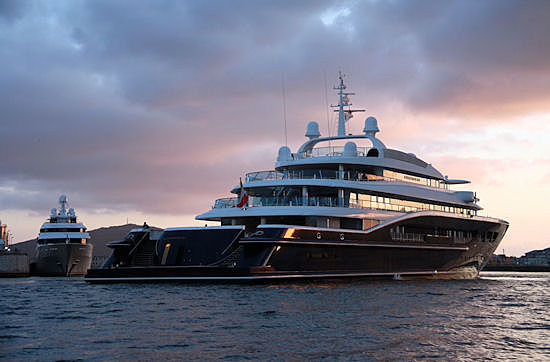 The 97.20 metre superyacht Carinthia VII is one of the most iconic superyachts ever-build. She is the only yacht in our list, owned by a woman.Designed by Tim Heywood, Carinthia VII was built by the renowned German Lürssen shipyard in 2002. As with so many of the yachts in this list, her interior has never been published, and she is not available for charter.