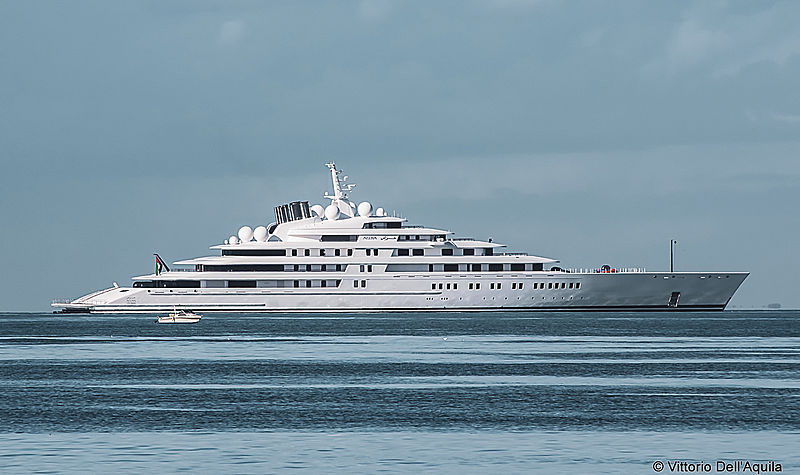 Photo: Vittorio Dell'AquilaThe 180-metre motor yacht Azzam recently arrived in the Mediterranean Sea for the first time since 2015 after setting off to her home port in the United Arab Emirates where the world’s longest yacht is stationed. Completed in 2013 by Lürssen at its facility in Lemwerder, Germany, Azzam outranks the second longest yacht in the world, Eclipse by nearly 20 metres. Her slender beam of 20 metres, together with a relatively sleek profile and concentrated superstructure, however, means Azzam’s volume of 13,136 GT makes her the fifth largest yacht in the world in terms of overall size. The top spot goes to the 156-metre Dilbar (15, 917 GT), also by Lürssen followed by the 155-meter Al Said (15,850 GT), 162.5-metre Eclipse (13,564 GT) and the 162-metre Dubai (13,470 GT). Azzam is the design work of Milanese design office, Nauta Design while the interior of this massive vessel was conceived by the Abu Dhabi-based Creation Line Decoration. It is unclear what drew Azzam out of her top-secret base in the Middle East to return to European waters, but considering it has been five years since her launch, it is likely due to maintenance and surveying operations that could be carried out in the vicinity of her current location.

Azzam on her way to the Middle East

In Pictures: The 180 metre Azzam, the world's largest yacht