Scorpion RIBs is a company world-renowned for producing the highest quality top-end range of custom built rigid inflatable boats (RIBs) at its South Coast, UK, manufacturing site. This year, the company has set itself some new goals that, according to Scorpion’s Patrick Byrne, it firmly intends to reach.

Mr Byrne took over the company back in May 2008 and his plans for Scorpion at that time included helping the business to develop and expand its manufacturing output as well as maximising the sales and marketing potential of the brand. It can safely be said that he is delivering.

During the latter part of 2008 and at the start of this new year, Scorpion’s management team has been implementing some fairly major initiatives in order to maintain a level of stability for its customers and its workforce whilst progressing its way steadily through the current economic downturn.

Patrick Byrne: “Stability and long-term planning are the name of the game right now. Scorpion is a debt-free business and we’re working on longer term objectives in order to weather these unprecedented market conditions.”

Plans are currently well underway for a new Scorpion distribution and service centre in Palma, Mallorca, opening in the Spring as well as a new Scorpion 6.5m RIB that will receive its worldwide debut at RIBEX in May. 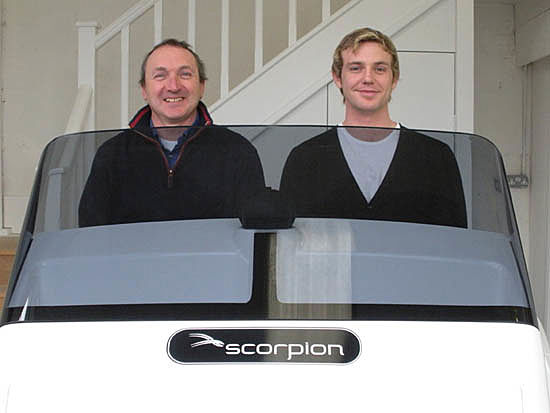 Stewart Thornley – Sales & Marketing Manager
Stewart started in the boating industry in 1994 working for Southern Motorboats and MedSale UK, looking after their brokerage section and selling Birchwood Boats and Azimut as well as new Hardy Cruisers. In 1998 he moved to CYS Yacht Sales and looked after the brokerage of the Hatteras and the Carver range of motor yachts.

The Millenium saw Stewart set up his own company, Lymington Marine Sales Ltd and, as a result of selling more and more RIBs, he could see this as a major business opportunity and hence concentrated mainly on RIBs. In 2004 Scorpion approached Stewart to look after the brokerage side of its business and now he has become a key part of the Scorpion management team.

Andrew Griggs – Product Designer
Andy Griggs has been brought on board as Scorpion’s in-house product designer. He completed an AMA (Advanced Modern Apprenticeship) with BMW Group (body and pressings division) in Technical Engineering, gaining an NC qualification in Mechanical and Electronic Engineering and an HNC in Mechanical Engineering Design.

Through these achievements, he then realised he wanted a career in a more design-based role but also wanted to maximise his engineering background. He returned to adult education and gained a First Class Hons in BSc Product Design over the course of three years at Bournemouth University. He is delighted to be working with Scorpion and is looking forward furthering his career and building links within the marine leisure market.