The second day of the J Class regatta started in very dull weather, with thick fog and light rain. However, spectators, crew, and owners alike were desperate to get out on the water and the race was scheduled to start at twelve as planned. The fog lifted slightly as twelve o’clock approached and the rain stopped. 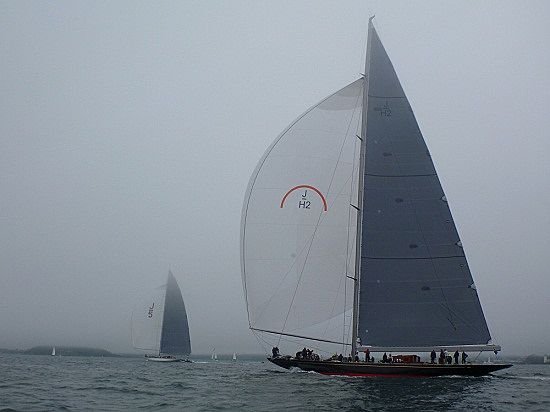 The large spectator fleet once again behaved exceptionally well, leaving a large area clear for the Js to manoeuvre to the start line. They were helped by the wonderful commentary from Jim Donal on VHF channel 69, to call it safety information would not do it justice; supporters were treated to a history of the class, a lesson in the logistical difficulty of moving such a fleet from the Caribbean to Falmouth, and running results from Wimbledon! 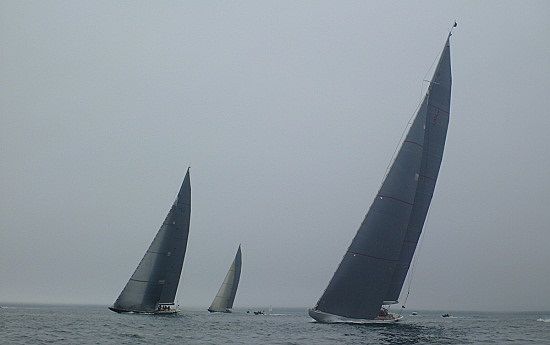 At the twelve o' clock start time, the fog was low; completely covering the last twenty feet or so of the 175 feet masts when the Js were more than 100 feet away.

All four boats approached the start line strongly, Rainbow in the lead at the one minute gun and looking slightly too fast...and so it proved as she was forced to turn 360 degrees and re-approach, thirty seconds behind the others.

Ranger, Lionheart, and Rainbow went straight on from the start line towards the windward mark, while Velsheda raced off towards the shore, taking the early risk that would give her a lead for the rest of the two and a half hour course. 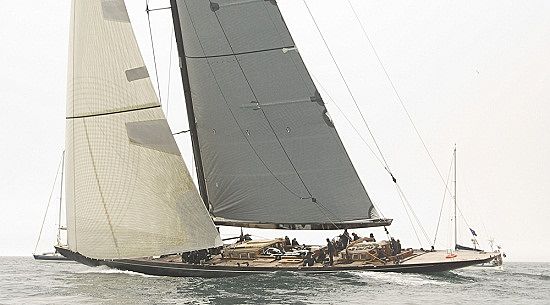 As the fleet progressed towards the first windward mark, it started to become clear that Velsheda’s gamble had paid off and she was comfortably in the lead, rounding the first windward mark and hoisting her spinnaker in very good time, taking no more than thirty seconds in all. Ranger followed second, Rainbow behind her, and Lionheart closely following.

The fog had lifted a little by this point and visibility became much better, though there still wasn’t a hint of blue sky or sun.

The wind had dropped by this point and progress slowed on the downwind leg, all boats maintaining their positions until the downwind mark where Rainbow powered in front of Ranger. Rainbow and Lionheart went to the left hand side of the course at the downwind mark by St. Anthony’s head, whilst Ranger sailed offshore, on the track of Velsheda. 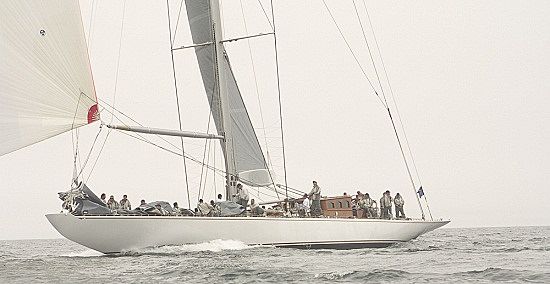 As the yachts converged once again on the next mark, it was obvious that Velsheda’s second gamble of the day had also come off, as her lead increased still further. Rainbow and Lionheart battled for position roughly level with Ranger. Following the disappearing Velsheda, the other Js rounded the bouy as they had earlier in the day; Ranger, Rainbow, Lionheart.

As the yachts hoisted kites once more, the fog began to descend again, rendering Velsheda almost invisible and Rainbow and Ranger no more than huge outlines ghosting through the grey sky.

With fog continuing to thicken, the PRO elected to shorten the race for safety reasons, leaving the Js to finish near the Helford River. Velsheda came racing in four minutes ahead of second-placed Ranger, who finished just 32 seconds in front of third-placed Lionheart, who pulled clear of Rainbow by the race end, beating her by 38 seconds.