The Spring/Summer issue of the newspaper comes in time for the summer superyacht season, and, as usual, continues with the most up to date and compelling superyacht news stories and features accompanied by crisp, fresh photography.

This quarter’s issue contains yet more exciting features and interviews with some of the most influential brands in the industry, including a revealing interview with CEO of the Italian Sea Group, Giovanni Costantino, who tells us what it was like to take over a company losing a vast amount of money per year and turn it around within just a few short years. 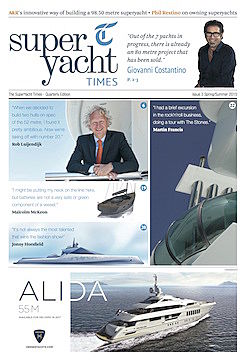 We also share an insight into the design world of British Studio H2 Yacht Design with the companies founder, Jonny Horsfield.

Leading marine architect and yacht designer Martin Francis tells SuperYacht Times the story behind his title of ‘The Glass Man’, and we also interview Managing Director of the renowned Dutch shipyard Amels, Rob Luijendijk, who told SYT about the unprecedented success of the Limited Editions series, how the brand market themselves and more.

Furthermore, the newspaper includes several articles to spark the interest of any yachting enthusiast or professional, with a look back at superyacht industry in 1993, detailing the three most important launches of the time as well as several significant design and ownership features.

We also interview CEO of Gulf Craft, Erwin Bamps, who tells SYT all about the planned expansion of the shipyard’s facilities in the UAE, what the yachting industry is really like in the region, as well as what the future holds for Gulf Craft.

To get your edition of the SuperYacht Times newspaper, make sure you subscribe now and never miss an issue.