Moonen Shipyards in the Netherlands has announced that its largest project to date, which was originally slated to be 133 feet in length, has been extended by a further four feet. The fully customised 42 metre Moonen will now carry a submarine that is capable of seating three passengers instead of the originally specified two.

With its increased length, this custom-built Moonen will make history by being the first luxury motoryacht in this size range to carry a fully fledged submarine for three people. With the option to reach a depth of 100 metres, the submarine will be secured on the swim platform and will be launched and recovered by an integrated crane, which also serves as a docking bay for the tenders. Once the vessel is in the water the enormous platform opens up to offer a world of watersports entertainment. 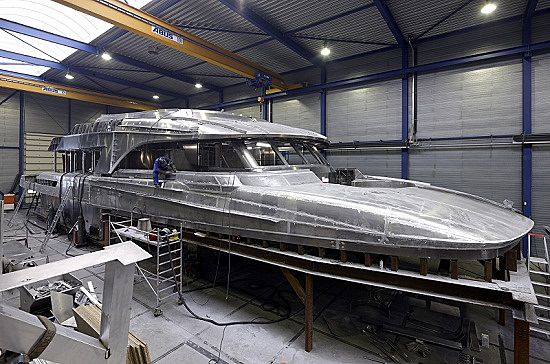 Construction on both the hull and the superstructure is proceeding apace, with a launch date slated for the autumn of 2012. The owner has chosen for an entertainment lighting system as part of a luxury home automation set-up. Moonen is also currently investigating various integrated solutions for climate control, air conditioning, heating and refrigeration installations. The owner has also requested that the yacht be fitted exclusively with LED lights as part of a bright and open interior. Designed by Art-Line Interiors, the overall interior style will feature oak wood and Zabrano. Combining rugged adventurous looks with modern superyacht style and classic elements, the yacht is an elegant explorer with a low profile, superior sea handling and an exceptional range.