Remember the date; August 8th 2010 was not just another summer Sunday for the United States yachting industry. Instead, at 10:30 a.m. a genuinely momentous event took place. For that moment marked the launch by Derecktor Shipyards of the 85.6 meter (281 ft) motor yacht Cakewalk, the largest yacht (by volume) ever built in the United States. 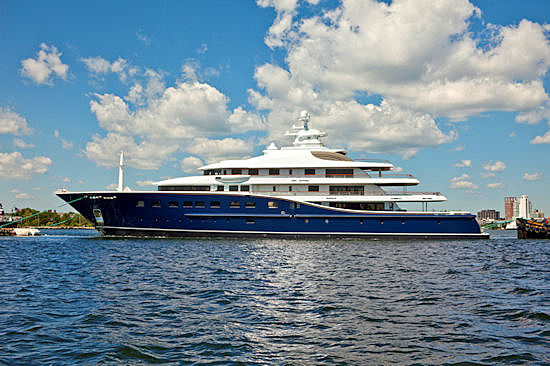 When the stunning six deck, 2998 gross ton vessel floated off Derecktors new 4000 ton dry-dock into the waters of Bridgeport harbor, it was the culmination of an effort never before seen in American yacht building. Several years and many, many thousands of skilled labor hours, along with tireless work from the owners’ team and Derecktors project group were needed to make the original vision a remarkable reality.

“Needless to say, as with any project of this scale and sophistication, there were some growing pains along the way, but we think the result speaks for herself” said an obviously pleased Paul Derecktor, President of the Derecktor group of shipyards.” For the first time, an American yard has shown it can equal or better the work of the best European yards. My brother Tom and I, along with everyone at Derecktor are very proud and we thank all the people who made this possible, in particular of course, the Owner and his team.” 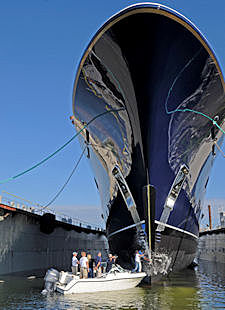 Cakewalk was designed by Tim Heywood Designs with Naval Architecture by Azure Naval Architecture. Interior design was by Dalton Designs, Inc. Literally dozens of subcontractors from engineering firms to security specialists participated in the project. “We certainly could not have done it without them” commented Gavin Higgins, VP of Business Development at Derecktor. “Some of the world’s most experienced and skilled specialists put their expertise into this job. You cannot successfully build a yacht of this size and complexity with having that sort of talent available.” Reactions from those involved in the project are a mix of pride, satisfaction and in some cases awe at what has been accomplished.

“She is superb” said Designer Tim Heywood. “The workmanship throughout is absolutely first-class, as good as you will find on any yacht in the world. I could not be more pleased for the owner and all involved”. Bill Zinser, Build Captain on Cakewalk and leader of the owners’ team, seemed as proud (and relieved) as a new parent, “She is what we knew she could be all along. It makes all the hard work, all the long days, worth it. We have great owners and we worked with a great group at Derecktor. We can’t wait to show her off to the world.” Notably, Cakewalk was christened for the owners by Carmen Golinski, the Interior Manager on board, indicative of the closeness of the owners and crew.

The yacht will remain at Derecktor for the next few weeks undergoing final outfitting and sea trials. She is scheduled to make her much-awaited debut at the Ft. Lauderdale International Boat Show in October. “Fittingly, this is Americas leading yacht show and she will be it’s leading lady” quipped Kathy Kennedy, Derecktor’s marketing director.

Industry praise for the, blue hulled Cakewalk had been rolling in even prior to launch. Jonathan Beckett of Burgess commented some months ago that, “I am extremely impressed by the apparent quality of Cakewalk. The attention to detail – from both the technical and aesthetics points of view – I am very impressed indeed. I believe Cakewalk will surprise the north European yacht builders.”