On the 23rd of August 2007 at Timmerman Yachts shipyard a great celebration took place. In the presence of the Owner’s representatives and the management of Timmerman Yachts, the launching of the first 31 m (built in the framework of Timmerman-31) was performed. The contract was signed at the end of 2005. 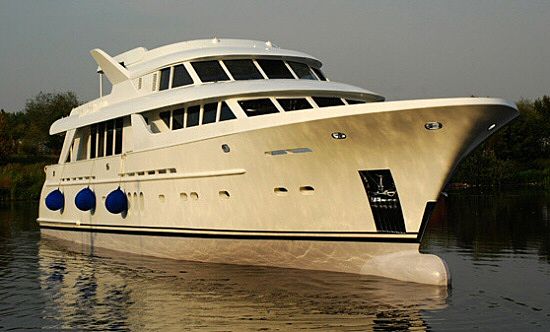 The yacht is built in the framework of the project Timmerman 31 developed by the biggest European independent Dutch design company Ginton Naval Architects. The interior was designed by Dutch studio Guido de Groot Design specializing in exterior as well as in interior production for unique motoryachts between 15 and 72 m. Raised pilothouse-type construction provides for maximal usage of free space on main deck, besides that an additional sun deck will make it possible to sunbathe. Light ice class of the yacht enables the owner to use it in any season and due to warmth saving windows and a modern climate-control system by Heinen & Hopman the guests will feel comfortable at any overboard temperature from –20 to +45 °С.

This three deck vessel with a steel hull and aluminium superstructure was built under the supervision of Det Norske Veritas (DNV) and completely complies with MCA requirements. The Timmerman 31 provides for excellent sea-going characteristics as well as reliability and easy maintenance. Two 486 HP diesel Caterpillars enable the yacht to run with speed 11,5 knots and has a close to transatlantic range of 2600 nautical miles.

According to the customer’s wish the yacht interior is made in two styles and sparkles for special luxury. The lower deck is decorated in classic style and on the upper deck elements of Japanese décor are involved. In the decoration of yacht compartments semi-precious stones and valuable sorts of wood (American Walnut, Walnut burl, Anegrie, Wenge, Italian (European) Walnut, Elm burl, Ash) are used.