Following a busy summer season many yachts have now moved onto more suitable cruising grounds, while some have chosen to take some much needed down-time in shipyards where crew will no doubt work hard at getting their yachts back in shape. In the following feature we take a look at some of the latest, coolest and largest yachts in the world and where they are currently located.

Lady Lara has left Lürssen’s Rendsburg facility in Germany earlier this week and is now moored in downtown Olso, Norway. The yacht was launched in April this year and embarked on her sea trials in July. Y.CO managed the build throughout and oversaw the past month’s final outfitting leading up to the delivery. The vessel’s interior and exterior was designed by Reymond Langton Design. Her exterior shape features grand sweeping curves and elegant proportions that resembles a feminine image, combined with masculine features such as defined lines and sculpted surfaces. Following her crew training trip in Norway, Lady Lara is expected to cross the Atlantic to cruise the winter season between Florida, the Bahamas and the Eastern Caribbean Islands 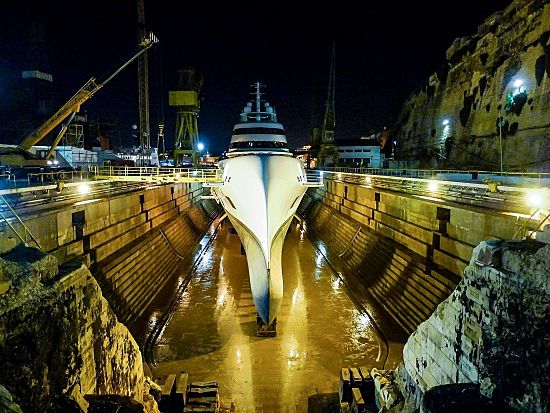 The iconic 119 metre superyacht A was built by German shipyard Blohm & Voss and launched in 2008 at their facility in Kiel. Her Philippe Strack design has long since been an industry-wide topic met with mixed opinions about the end result. She is powered by two 6,035hp MAN diesel engines propelling her to speeds up to 23 knots. She boasts an incredible range of 4250nm while maintaining her top speed. She has recently been hauled out for end-of-season maintenance works at the Palumbo Superyacht shipyard inMalta. 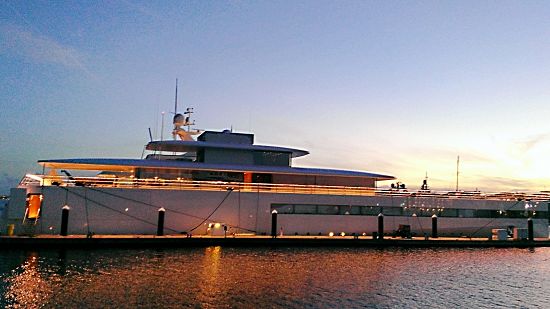 Superyacht Venus, the 78 metre Feadship that was designed by Philippe Starck for the late Steve Jobs, has arrived in the USA following a 2 month maintenance period in La Ciotat, France, and is currently docked at the Rybovich yard in West Palm Beach. She is fitted with large cabin windows to fill the inside with an abundance of natural light, whilst in the main living area are forty feet long and ten feet high walls of glass further enhance a light and airy ambience for the total of 12 guests that she comfortably accommodates. 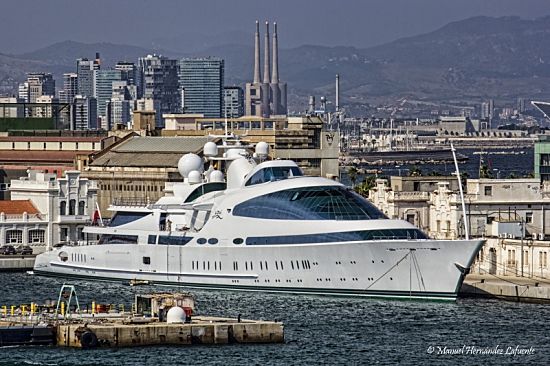 Superyacht Yas has an interesting background story, and started out as a Dutch naval vessel, which was then later moved to Abu Dhabi where she was transformed by the ADM Shipyard. She features an interior by Pierrejean Studio in France, who also designed her exterior. She was spotted spending time on the French Rivierathis past summer season and has since been spending time in Barcelona for maintenance works. 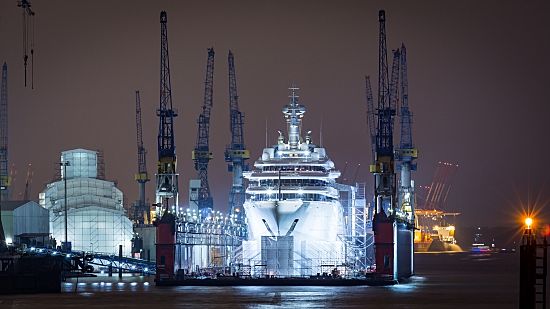 The world’s second largest yacht, Eclipse, is currently hauled at the German shipyard Blohm & Voss where she is undergoing maintenance and rebuild work. The yacht has seen a very busy summer cruising season with destinations ranging from Norway, Scotland, Turkey and Palma de Mallorca and will spend the next few winter months at her birthplace according to local news sources. The huge yacht, owned by a well known Russian businessman, accommodates 36 guests and can carry up to 100 crew members. Some of Eclipse’s most impressive features include a massive 200m² swim platform, a large pool on the main aft deck and two helicopter landing pads. 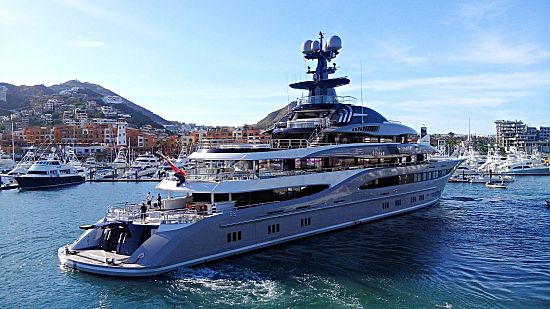 Superyacht Kismet became the largest yacht to enter Marina de CSL in the Mexican coastal town of Cabo San Lucas when she arrived here over a week ago. Certainly one of the German shipyard’s most recognizable creations, the 95m Espen Oeino designed yacht was launched in July 2014 and is characterised by her glistening golden exterior and striking Jaguar figurehead on the bow. She is currently exploring the west coast of Mexico. 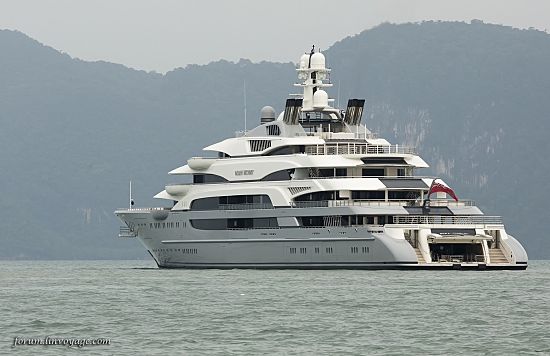 Completed by Fincantieri Yachts in 2014, Ocean Victory is designed by renowned designer Espen Oeino with interior spaces created by the late Alberto Pinto together with Sessa Romboli. As with many other yachts of this size, Ocean Victory is packed with guest-pleasing features such as 6 pools spread out over her 7 decks, an internal floodable dock to house her 14 metre tender, and two heli pads. The yacht’s owner is known to have owned a 75 metre Feadship also named Ocean Victory, which is now called Ebony Shine. She has been seen spending time in Malaysia over the past few weeks. 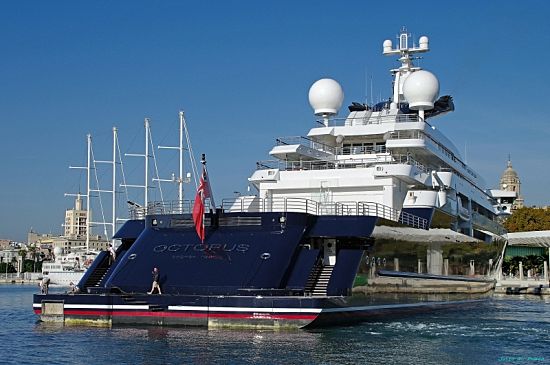 Octopus was built by Lürssen in 2003 to a design of Espen Oeino International and features an interior by Jonathan Quinn Barnett. She has a cruising speed of 17 and a top speed of 20 knots. Octopus has a large swimming pool on her bridge deck, a cinema, a basketball court, two helipads and two mini submarines. She is currently moored in the Spanish city of Malaga on the Costa del Sol. 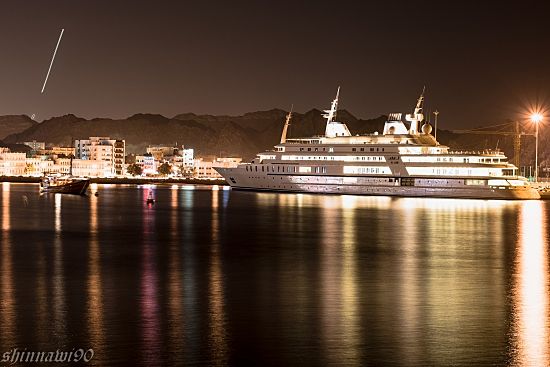 Built by Lürssen in Germany under the project name Sunflower, Al Said was delivered in 2008 to her owner, the ruler of Oman. Currently listed as the 4th largest yacht in the world, it is interesting that Al Said is in fact far larger than the three yachts which surpass her in length, with a total volume of 15,850 tons. She is also one of the most powerful yachts in the fleet, with a total of 16,399 kilowatts. The yacht's exterior is designed by Espen Oeino, with an interior by Redman Whiteley Dixon. She is currently moored in her home berth in Muscat, Doha. 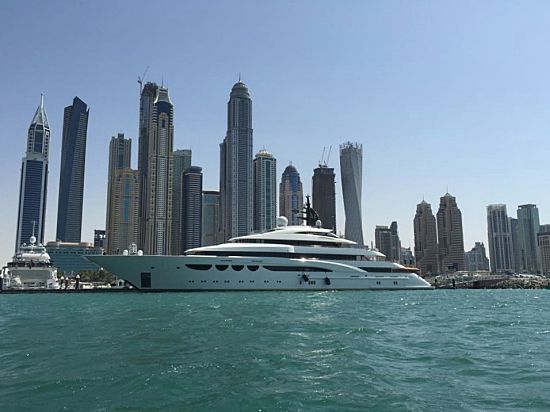 Measuring 86.11 metres in length, pictured here in Dubai is Quattroelle, built by the German shipyard Lürssen Yachts in 2013 with both interior and exterior design by Nuvolari & Lenard - the first superyacht the brand has designed for the shipyard. The name Quattroelle is Italian for "4 times the letter L" and the 4 L's representing Love, Life, Liberty and Luxury. On board she accommodates up to 12 guests, hosted in absolute style and luxury over six spacious decks. A crew of 28 are also accommodated for.