After sailing all the world’s seas, Putty VI, one of Vripack’s most famous designs, has recently undergone a complete refit under the professional eye of owner appointed project manager Jim Boot. Initiated by Vripack Brokers, Shipyard Balk in Urk The Netherlands was responsible for the refit and re-launched her on the 12th July 2007. Originally built by Palmer Johnson in 1995, Putty VI is worldwide recognized as the first ever specifically designed Expedition Super Yacht. 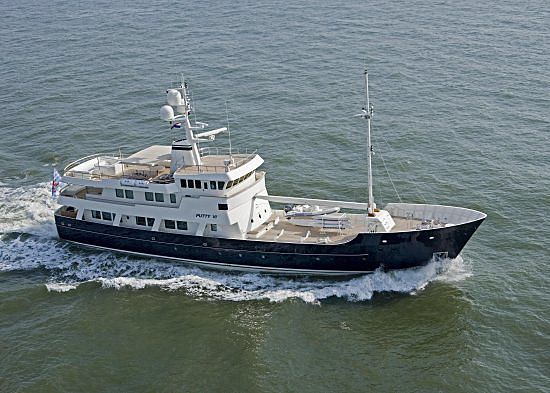 During the refit, a complete new air-conditioning plant was placed in the engine room, all fan coil units were serviced and modified with mufflers in the fresh air system, new zero speed stabilizers were mounted and the teak decks were completely overhauled and 100% newly caulked.

Further the sundeck was completely modified with new bulwarks, a new life raft stowage, teak cap rails and a sun awning. For even more pleasure a sun pad, Jacuzzi, bar with grill, icemaker and a fridge were included.

Also the owners quarters, including the bedroom and bathroom, VIP and guest cabins were completely rebuilt. Extra steam showers were added, all areas have been repainted and the ceilings were renewed. To finalize the refit, Putty VI received a complete paintjob. The modifications mentioned above are just a small handful of the total refit. Definitely the crown on the work is that she is now fully ABS classified.

Following the successful refit, Vripack Yacht & Ship Brokers BV has been appointed Central Agent for the sale of Putty VI.