The seven maxi yachts taking part in the first edition of the Transatlantic Maxi Yacht Rolex Cup, promoted by the International Maxi Association and organized by the Yacht Club Costa Smeralda with the support of the Real Club Nautico de Tenerife and the Sint Maarten Yacht Club, are progressing westward across the Atlantic accompanied by fair conditions and high spirits. The fleet set off from Tenerife in the Canary Islands on Monday 26th November bound for St. Maarten in the Netherland Antilles. As of 16.45 UTC Morten Bergsen's Wally 105 Nariida (NOR) continued to hold a lead that she has not relinquished from the start.

The shortest possible distance the maxis will cover from start to finish, based on the most direct possible course, is approximately 2650 nautical miles. After just over 72 hours of navigation the Norwegian leader has covered more than 900 nautical miles, slightly over one third of the course. If skipper Knut Frostad and his crew can keep up this pace they may expect to arrive in St. Maarten around the middle of next week, well ahead of the official time limit set for Friday 14th December at 15.00 local time (UTC -4).

"At the minute the true wind speed is 16 to 20 knots," reported Frostad at 15.24 UTC, "There is a small swell, blue sky and nice sailing conditions. We are running with spinnaker and enjoy the trade winds. It's an interesting weather scenario as the trades are broken up from the normal pattern. We have taken a northerly position and obviously hope this will pay off in the long run."

Frostad and his crew, which includes many Volvo Ocean Race and Whitbread sailors, are enjoying the relative comfort of this trip: "The atmosphere is great onboard. For those onboard used to racing in the Volvo Ocean Race, it's a huge difference sleeping in a proper bed and eating nice food every day. Some have even enjoyed the luxury of a fresh water shower!"

It hasn't all been plain sailing, but a resourceful crew can overcome many difficulties, as Frostad goes on to explain: "We ripped our reaching gennaker two days ago, and the crew has managed to sew it back together using the new sewing machine we have onboard. It takes a while to get various pieces from a 600 square metre sail back together, but now it's all in one piece again." 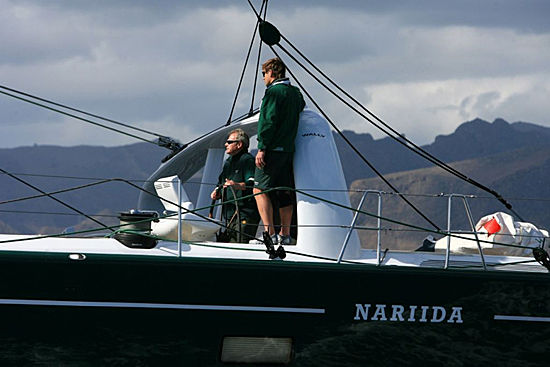 Nariida has chosen the most northerly route of all the maxis and is followed by Peter Harrison's Sojana (GBR). Further back, and following a more southerly course are Andrè Auberton's Dark Shadow (MON), Blue Pearl (GBR), Bernd Kortum's Julie Marie (GER) and Will Apold's Valkyrie (CAN) with less than 50 nautical miles separating each of these yachts.

Rounding up the fleet, having covered almost 600 nautical miles, is Gerhard Ruether's Zefiro (GER). Reuther, who has over 130,000 miles of sailing under his belt, is completing his first transatlantic race and is thoroughly enjoying the experience as his report of 14.00 UTC demonstrates. "We have 15 knots of wind from 60 degrees. Sea condition moderate to rough. Our average speed is 9 knots. All is going well. At the moment we are running at 10 knots under gennaker. Spirits on board are high and we are enjoying every minute!".