Nariida (NOR), the Wally 105 owned by Morten Bergesen, was the first maxi yacht to cross the finish line - at 03.06 am UTC on 7th December 2007 - in the first edition of the Transatlantic Maxi Yacht Rolex Cup. After 10 days, 14 hours, 1 minute and 48 seconds of navigation, the 15 crew members crossed the line located off Simpson Bay observed by the Yacht Club Costa Smeralda’s Race Committee and were met by a delegation representing the St Maarten Yacht Club. Nariida covered the 2,650 nautical mile trip from Santa Cruz in Tenerife at an average speed of 10.24 knots. The race is promoted by the International Maxi Association and organized by the Yacht Club Costa Smeralda with the support of the Real Club Nautico de Tenerife and the Sint Maarten Yacht Club. 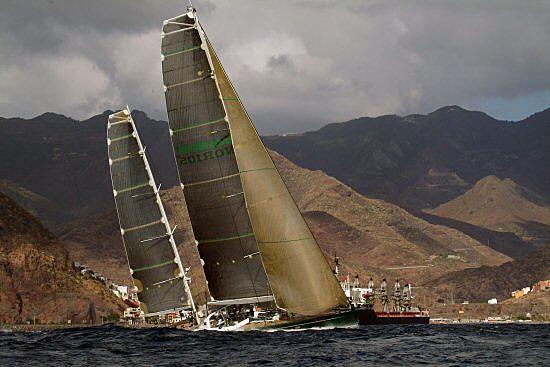 “It was an exciting trip,” commented Bergesen on arrival in Palapa Marina this morning. “We had a lot of wind. At the start we hoped to do it in a shorter time but we had a couple of very quiet days but a lot of good wind most of the way, no real accidents no big problems. Looking at our routing I think we couldn’t have done better so now we just have to wait and see what happens with the other boats. Sojana is our closest competitor and we hear rumours that they are getting more and more wind so we’re following them closely on the tracking and we know exactly when she has to be here to beat us and we’re just as excited as they must be.”

Skipper Knut Frostad was also pleased with the real time win: “It was a great race. I was very surprised by the weather system; it was a very unusual weather system and we had a very northerly route, which is not the usual pattern. We worked very hard on our strategy, and it was right, but unfortunately for us in the end we had light winds, and the other guys behind us are going to have more wind, so we don’t know if we’ll be first or second on the handicap but at least we’ll be one or two. The boat stayed together very well and we had a very, very good team on the boat and we had a lot of fun.”

After his numerous round-the-world voyages, Frostad also appreciated the comforts that a maxi yacht affords. “Fifty percent of our crew are people who have done round-the-world races with me and they are used to very uncomfortable ways of travelling, so this was a great pleasure for us to eat some nice food and sleep in a nice bed!”

Luca Bassani, President of Wally yachts and International Maxi Association member, has been following the race closely and was delighted with Nariida’s win “ Congratulations to Morten Bergesen, Knut Frostad and the whole Nariida crew from the entire team at Wally. Congratulations to this boat which we are particularly fond of and which, after 13 years, is still so competitive and so efficient. I am proud to have designed and built her and glad that she has found an owner as passionate as I am.”

Peter Harrison’s Sojana (GBR), second in line to finish, was approximately 130 miles away at 16.30 UTC today. She was travelling at approximately 15 knots accompanied by around 18 to 20 knots of northeasterly wind. Sojana, the largest boat in the fleet at 115 feet, is followed by Andrè Auberton’s Dark Shadow (MON), Blue Pearl (GBR), Will Apold’s Valkyrie (CAN), Bernd Kortum’s Julie Marie (GER) and Gerhard Ruether’s Zefiro (GER).