As ocean crossings go, the Transatlantic Maxi Yacht Rolex Cup 2007, which started 26th November, will go down in yachting history as relatively tame, save for humpback whale sightings, flying fish frenzies and token moments of equipment anguish in brisk winds. Perhaps it was the ample size of the seven competing boats -- maxi yachts of 18 metres (70 feet) and above -- that granted enjoyable crossings. Or maybe it was the fact that the traditionally steady northeasterly trade winds on the 2700-mile course from Santa Cruz de Tenerife (Canary Islands), where the race started, to St. Maarten (Netherlands Antilles) where it ended, only occasionally "broke up" to toy with best-laid plans. 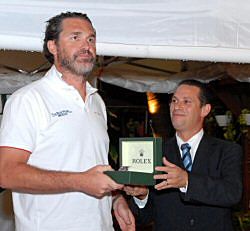 Whichever was the case, the smooth going for this first-time event was greatly appreciated by both the competitors and organizers from Italy's Yacht Club Costa Smeralda (YCCS). And in the end, IRC handicap calculations handed overall victory and a Rolex timepiece to Anders Johnson (Stockholm, Sweden) and the crew aboard his Swan 70 Blue Pearl (GBR). The sleeping giant, with its almost exclusively Swedish crew -- including skipper Klabbe Nylof who has crossed the Atlantic over a dozen times -- had finished an unassuming fourth over the line on 8th December, after 12 days, 2 hours, 22 minutes and 41 seconds at sea.

"It was good for us on board," said Johnson. "Everybody had fun and we are really pleased with the result. We had a few problems with wrecked spinnakers and a lot of sails damaged, but overall it went well. At the end of the race, we had two days with not very much wind at all, which was quite annoying; then the wind came back on the last night and we were logging 18 and even up to 20 knots so that was really good. This is my second Transatlantic and I’m sure I’ll do more. I like the long haul!"

Early in the race, Frostad reported a small swell and blue sky while running under spinnaker ahead of 16-20 knot trade winds. "For those onboard used to racing in the Volvo Ocean Race, it’s a huge difference sleeping in a proper bed and eating nice food every day." On day seven (2nd December), however, the skipper had more serious issues with which to contend: "We are crossing a massive squall line with rain and lightning. This is the beginning of the front we have to go through to get to the northerly breeze on the other side. Our strategy has been to position ourselves long-term for this transition and to get the best approach to the finish. It’s obviously a tricky and quite unusual situation with the trades completely broken by the low pressure system ahead of us."

At the time, Nariida's closest competitor on both corrected time and for line honours was Sojana, which, according to Frostad, "bailed out earlier and chose a completely different strategy, heading south." As Frostad knew, however, "corrected time calculations are never realistic until every boat is finished, and if the smaller boats get more breeze in the end, the picture can change."

Nariida finished first over the line on 7th December after just more than 10 1/2 days at sea. Sojana wound up sixth on corrected time although she followed Nariida over the line in second place, less than seven hours behind her.

Gerhard Ruether’s Zefiro (Hamburg, GER) was the very last maxi to cross the finish line on 10th December. The Solaris 76 completed the crossing in 14:1:21:5 and took third place overall under IRC handicap.

"It was our first Atlantic crossing and bearing in mind that we had the smallest crew, only eight, I am very proud," said Ruether, noting that challenges included mending a blown-out spinnaker and negotiating wind speeds from 6 to 46 knots. "It was the first time they all sailed together as a team and they did exceptionally well, great teamwork."

Apold (Halifax), who couldn't help musing about crew antics, sea life and falling stars in his log, admitted that this was the first time his crew of 13 -- all from the Halifax area of Nova Scotia on the east coast of Canada -- had sailed in a format other than against each other on small boats. "I would like to congratulate the YCCS, Rolex and the IMA for proposing, planning and executing this fine race. This is the right timing, the right start location and the correct finish island and will draw more boats in the future."

The Transatlantic Maxi Yacht Rolex Cup 2007, which the YCCS plans to hold again next year with the same format, was promoted by the IMA with the support of the Real Club Nautico de Tenerife and the Sint Maarten Yacht Club. It was created by the IMA in collaboration with YCCS in response to requests from owners for a transatlantic race dedicated specifically to maxi yachts. The regatta will also contribute to the IMA’s efforts to establish a seasonal circuit for maxis that will allow owners to compete in summer offshore events in the Mediterranean and Europe before moving to the Caribbean for the traditional winter racing season.

The maxis will return to the YCCS, which is located in Sardinia and administers the IMA, for the Rolex Boat International Superyacht Regatta in June followed by the annual Maxi Yacht Rolex Cup in September.