1st December 2007. After six days of navigation a battle for the lead is heating up in the Transatlantic Maxi Yacht Rolex Cup which sees seven maxi yachts crossing the Atlantic westward from Tenerife to St Maarten. Promoted by the International Maxi Association and organized by the Yacht Club Costa Smeralda with the support of the Real Club Nautico de Tenerife and the Sint Maarten Yacht Club, the race started on 26th November, and the leading yachts have now covered approximately half of the 2650 nautical mile trip. 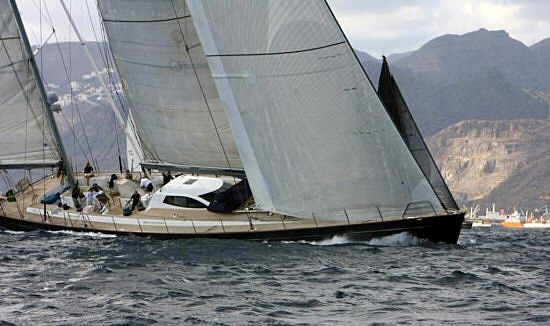 Morten Bergsen’s Nariida (NOR), which has led the fleet for the duration of the race, is now facing a strong challenge from Peter Harrison’s Sojana. The two leading yachts are following different courses with Nariida sticking to the northerly route that she has followed from the start while Sojana chose to head further south sometime yesterday and at 10.30 UTC was approaching 23N 40W while Nariida was nearing 27N 42W. The two are so close in fact, that it is becoming difficult to tell exactly which is leading but their positions at 11.00 UTC translated to Nariida, a Wally 105, being approximately 1278 nautical miles away from the finish line while Sojana, a Farr 115, must cover another 1292 nm. Both were travelling at approximately 15 knots and Nariida reported blue skies, sunshine and around 18 to 20 knots of wind from 090°.

Nariida and Sojana are followed by Andrè Auberton’s Dark Shadow (MON), Blue Pearl (GBR), Bernd Kortum’s Julie Marie (GER) and Will Apold’s Valkyrie (CAN). Gerhard Ruether’s Zefiro (GER), in seventh place, had an encounter with an unidentified object, possibly a net, during the course of Thursday night, which slowed the boat considerably before the crew were able to disentangle themselves by heaving to and drifting backwards until free.

Most of the crews are settling into the fairly stable trade wind conditions and although Valkyrie has reported passing several boats competing in the Atlantic Rally for Cruisers, most encounters are with the Atlantic’s marine life: Julie Marie was accompanied for 30 minutes yesterday by two whales while the crew of Valkyrie will be lunching on some of the flying fish which landed on their deck this morning.

The fleet can expect winds to remain at approximately 15 to 18 knots over the next 24 hours as they move round to become south – south easterly this afternoon and southerly by midday tomorrow.