10th December 2007. Gerhard Ruether’s Zefiro (GER) crossed the finish line in the Transatlantic Maxi Yacht Rolex Cup at 14:26 UTC today. Zefiro is the final maxi to have completed a journey which started on 26th November from Santa Cruz de Tenerife in the Canary Islands with the final destination of St Maarten in the Netherlands Antilles. The Solaris 76 completed the crossing in 14 days, 1 hour, 21 minutes and five seconds and takes third place overall under IRC handicap. 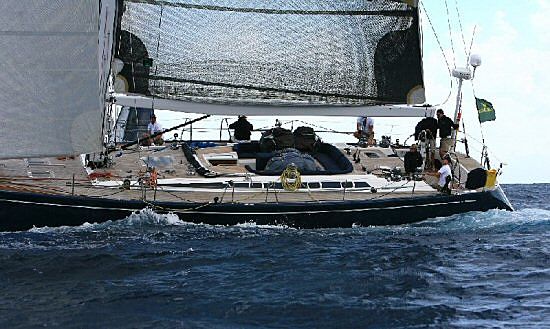 Anders Johnson’s Blue Pearl (GBR) is the overall winner in the first edition of this transatlantic race, which is for maxi yachts of 18 metres (70 feet) and above and is promoted by the International Maxi Association (IMA) and organized by the Yacht Club Costa Smeralda with the support of the Real Club Nautico de Tenerife and the Sint Maarten Yacht Club. Johnson was accompanied by an almost exclusively Swedish crew, including skipper Klabbe Nylof who estimates having 25 to 30 Atlantic crossings to his name, including a record-breaking trimaran crossing from Cape Town to Rio de Janeiro. The owner and crew of the Swan 70 will receive a Rolex timepiece and trophy during the prize giving ceremony scheduled for tomorrow 11th December in Palapa Marina.

Second place goes to Morten Bergesen’s Nariida (NOR) with a predominantly Norwegian crew including her habitual race skipper and Volvo Ocean Race veteran Knut Frostad and Swedish navigator Roger Nilsen. Nariida, a Wally 105 and the oldest boat in the fleet (launched in 1994), will also receive the YCCS Line Honours Trophy and the IMA Challenge Trophy for the highest-placed International Maxi Association member.

Four of the seven competing maxis had finished by Friday afternoon UTC and were joined at 22.00 hours and 57 minutes by Will Apold’s Valkyrie (CAN) and at 08:19 and 20 seconds UTC on Saturday morning by Bernd Kortum’s Julie Marie (GER).

Apold, who was sailing with a crew of mainly Canadian amateur sailors, had his Swan 78 delivered in July of this year and was able to iron out a few wrinkles on this crossing. “It was a great trip; we had a lot of fun. The boat is new and we are still working on a lot of things. It was a good test, 2,700 miles is a long way but it was a fairly easy trip; we had nice trade winds. Now the boat is going to stay in the Caribbean and I am going to do some cruising with my family.”

Kortum, whose Swan 100 was also launched in July of this year, was equally pleased with the crossing: “A fantastic trip! We had a few problems but mainly nice conditions and everybody had a good time. We had a few days with very light winds. For two whole days we were doing an average of 5 knots, so that held us back quite a bit. There were also times when we saw gusts of up to 45 knots. We had good trade winds for the last few days, around 20 to 25 knots from 60 to 70°, so almost perfect conditions. It was a very nice race, great organization and my thanks go to everyone involved.”

Zefiro’s Ruether was delighted with the boat’s first Transatlantic crossing “We are extremely happy to have arrived finally! First of all I would like to thank the YCCS for the wonderful race, the organization, the hospitality, everything. It was my first Atlantic crossing and bearing in mind that we had the smallest crew, only eight, I am very proud of our crew. It was the first time they all sailed together as a team and they did exceptionally well, great teamwork. We had a lot of different weather, at the beginning some northerly winds which is a bit strange, at the beginning we had light winds and we also experienced a lot of squalls, a lot of rain. Yesterday we had everything from 6 to 46 knots.

"We blew our spinnaker on the second day and we used the second one and damaged that too but we managed to repair it. Then we had to be careful! Then we did something very interesting: with our spinnaker boom we boomed out the genoa to the windward side and we had the staysail and the mainsail on the leeward side and we could sail downwind in a safer way than with the gennaker. We were lucky because the winds were strong for the last quarter of the race and we had the right sails and we did very good speeds and made up a lot of ground during the last few days. We are very happy, it was our first Atlantic crossing and not the last one.”