The six maxis and superyachts participating in the Transatlantic Superyacht & Maxi Regatta 2012 crossed the starting line off Santa Cruz de Tenerife yesterday at 1 p.m. (UTC). The fifth edition of the event, organized by the Yacht Club Costa Smeralda and the International Maxi Association (IMA), will see the fleet of sailing giants navigate approximately 2700 miles to reach the finish line in British Virgin Gorda where the YCCS has its a winter Clubhouse. The passage under sail usually takes from 10 to 16 days if the north-east trade winds collaborate, although the course record was set by last year's line honours winner, Hetairos, in just under 8 days and 11 hours.

Live tracking is available on both the YCCS website (www.yccs.com) and the IMA website ( www.internationalmaxiassociation.com). Live tracking will show each yacht's progress in real time while links to several of the boats' individual blogs covering the regatta are published on both the IMA & YCCS websites.

Racing got underway today in 26 to 28 knots of north/north-westerly winds. Only the superyacht Shenandoah of Sarkchose to head south of the island of Tenerife, while the rest of the fleet left the island to port. The race start, set against the backdrop of the Santiago de Calatrava Auditorium and the island's volcanic peak Pico de La Teide, was a sight to behold thanks to the dimensions of some of the competing yachts - such as the 55-metre Shenandoah of Sark, a beautiful triple-masted gaff schooner, and the two supermaxis Sojana and Nilaya, respectively a 35-metre Farr 115 and a 32-metre Reichel/Pugh 112. Nilaya was also first to the weather mark. 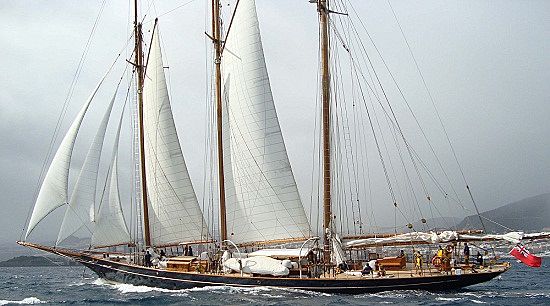 Trophies will be awarded at the prize giving ceremony scheduled to take place at the latest on December 12 in Virgin Gorda. The YCCS Virgin Gorda Clubhouse was officially inaugurated last January, while the purpose-built YCCS Marina has been operational since March 2011.