Tricon Marine, a high-quality builder of FRP/Composite megayachts up to 180 feet (55 meters) long, has completed construction of China’s first and only North American-owned and operated shipyard. Megayachts currently under construction have been moved to the new facility, including Tricon’s next launch, a 92-foot (28 meter) long-range offshore performance motoryacht commissioned by an undisclosed Tricon client. The launch will be unveiled during the official shipyard opening ceremony in the spring of 2009. 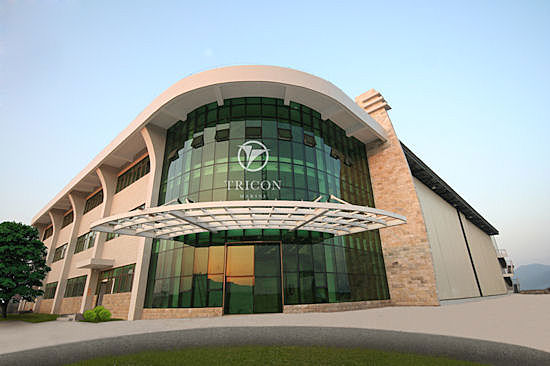 Tricon is helping to lead the charge as China takes center stage in a new era in luxury yachting, one that focuses on excellent quality with superior value. The company’s facility in China caters to a discriminating clientele of OEM manufacturers and personal custom yacht clients who demand a world-class megayacht with superior investment value.

“With most segments in the shipbuilding industry contracting and consumers demanding greater value, our timing in offering a solution that addresses these needs and establishes a competitive offering couldn’t be better,” said Christos Livadas, Chairman and CEO, Tricon Marine. “We intend to put China on the map as a place for world-class yacht construction as never before. Tricon Marine is committed to strictly adhering to client specifications and contractual obligations while offering unmatched craftsmanship at a price that sets a new value standard in the industry.” 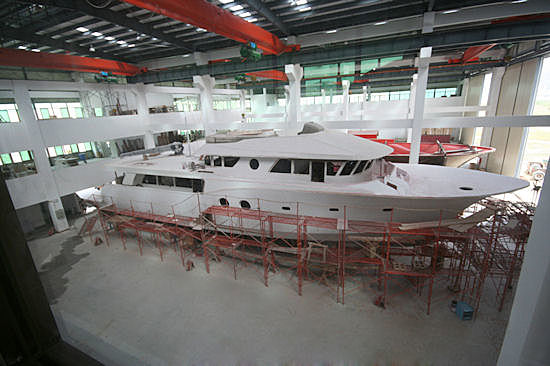 Dave Adams, Vice President of Tricon Marine, added, “Ironically, the birth of Tricon Marine comes at a time when it makes the most sense, especially in this worldwide economy. We are offering the industry a great solution to the pricing-versus-quality challenge that has often been talked about in the yachting business. Clients today want to know that they are getting the best value for their money inch by inch. Consumers are scrutinizing their lifestyle investments more than ever after some of the major financial mishaps of 2008. Tricon Marine is a feel-good experience.”

Located just outside the city of Zhuhai in China’s Guangdong province (an easy ferry ride to Hong Kong and Macau), Tricon’s half-million square foot (55,000 square meter) state-of-the-art complex is designed to operate at the highest American and European standards of craftsmanship, cleanliness and security. In order to underscore its commitment to producing the finest boats at true value pricing, Tricon Marine will limit build-slots to a maximum of three yachts in simultaneous production for the next few years so that no detail is overlooked. At full capacity, the yard will be the largest for composite yacht construction in China with a production capability of 16 yachts indoors and in-water work on two additional yachts up to 55 meters in length at its pier. The company can complete up to $60 million in work per year depending on the size of the yachts under construction.

Tricon’s skilled management team has more than 75 years of combined industry experience with recognized names such as WestBay and Ocean Alexander. Prior to founding Tricon, its principals also commissioned and supervised the construction of 14 yachts using Chinese builders since the beginning of this decade. 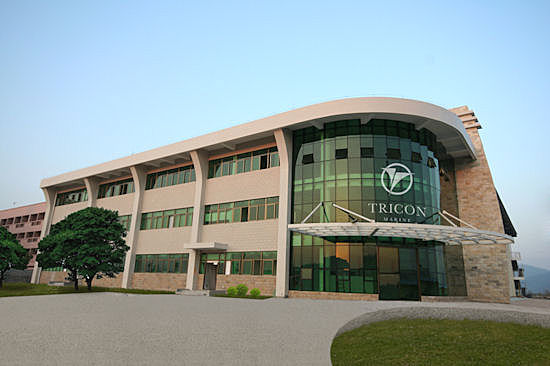 Tricon’s Western-trained professionals uphold the highest quality standards and controls followed by shipbuilders in the U.S. The company currently has 120 employees and expects to grow its skilled labor pool to 210 workers over the next 18 months. It carefully selects and oversees the best workers and craftspeople, most of whom have experience at other shipyards in the area and a minimum of five years of active work in the yacht-building trade.

The shipyard has been built to keep workers as comfortable as possible taking advantage of the climate in the different seasons. As a result of the way its workers are treated, Tricon is able to recruit and retain the very best employees.

Tricon Marine’s entire office staff uses English to communicate. All specifications, contracts, change orders and other documents are written in English to eliminate the misunderstandings commonly found in other facilities worldwide.