Trinity Yachts, L.L.C. announced the launching and christening of the 122 ft. (37.2m), 24 ft. (7.3m) beam, aluminum sportfishing yacht, the Mary P. She is the first hull built and launched by the Trinity Yachts’ New Orleans shipyard, since the post-Katrina reopening of that shipyard on July 5, 2006. 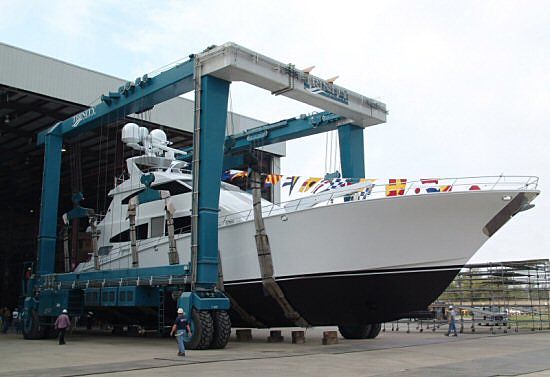 With the naval architecture by Doug Sharp of Sharp Designs and built by Trinity Yachts, the Mary P has truly answered an extensive client brief through extensive research, including tank testing of the hull-model while going astern. The transom was designed to increase the seaworthiness and maximize performance while in stern mode. There are many other unique details which enhance her role as a sportfishing yacht, such as a fully automated anchor deployment and retrieval system, specially designed underwater lighting to enhance her performance when night fishing, and a flybridge that maintains a good line of site for the captain, which is especially important when backing down on a fish.

Some of the key interior features of the Mary P are a highly finished custom interior with exquisite woods such as Oak Burl, African Zebra and Japanese Sen, handcrafted cabinetry throughout, and book matched granite in the owners’ bathroom. The Mary P accommodates an owner’s party of 8 in four (4) staterooms and a crew of three (3) in two (2) cabins in the stern. 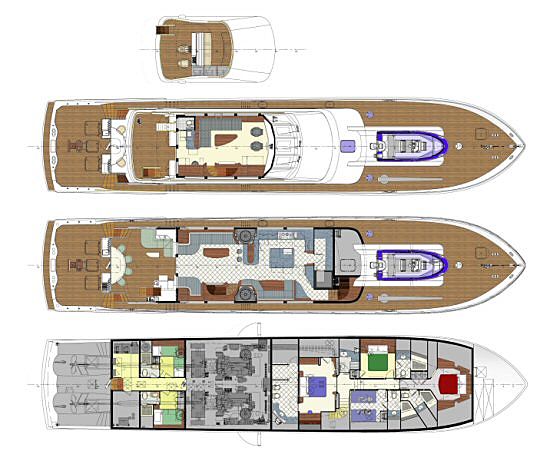 The propulsion is from twin Caterpillar engines 3512B-HD producing 2540 hp at 1800 rpm. This provides a top speed of approximately 25 knots. A minimum of 7,000 gallons (26,460 L) of fuel allows a large cruising range. The Mary P has a very advanced stabilizing system featuring the Quantum MagLift ® with 3 axis digital control and Zero Speed ™ as well as high speed stabilization utilizing Archer® active trim tabs. This combination of two types of stabilizers enables the Mary P to be a stable platform at high speed, trolling, at anchor and a first for any yacht, stabilization while backing down on a fish. The yacht also has a 4,000lb davit with a 14ft. boom and a 120hp bow thruster.

Trinity has several exciting years ahead of it, with 24 superyachts under construction, of which seven are presently being built at the New Orleans yard. As the largest custom luxury superyacht builder in the United States and the third largest in the world, Trinity’s growth is unprecedented in the industry. Today they are looking to hire between 200 to 400 more employees, such as welders, pipefitters, carpenters and engineers. In a time of economic uncertainty elsewhere, Trinity knows no boundaries and continues to increase its orderbook and enhance its reputation by delivering the finest custom superyachts in the world.

Centrally located on the Gulf Coast of the United States, Trinity Yachts has earned its place as one of the world's elite builders of custom superyachts with an emphasis on European quality, steel and aluminum constructions.