Trinity Yachts, L.L.C. announced recently, they launched the 161 ft. (49.1m) yacht named Destination Foxharb’r Too after a brief christening ceremony by the new owner. She is a tri-deck with a beam of 28 ft. (8.6m) and an aluminum semi-displacement hull and aluminum superstructure. 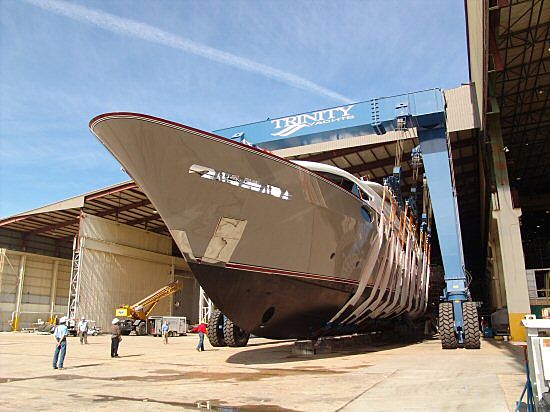 Designed and built by Trinity Yachts, L.L.C., she has a cozy refreshingly cool and smart Patrick Knowles’ designed interior, in which her style is influenced by a European Spa Resort, featuring tailored sophisticated fabrics, stonework showcasing Beaumaniere Limestone, River Rock Pebbles and Walnut Travertine, satin nickel accents and a rich millwork palate of Redwood Burl, Lacewood, Macassa ebony and Honduran mahogany. Hand carved glass panels inset into passage doors throughout, adds a sense of art and dimension to her interior. A stunning Mural on the forward bulkhead of the dining room provides a dramatic backdrop for the otherwise serene decor.

The propulsion comes from two (2) Caterpillar engines 3512B, producing 2250hp. This provides a top speed of approximately 20 knots. She has a cruising range of 3000 nautical miles at 10 knots. The Destination Foxharb’r Too has an advanced stabilizing system featuring Quantum 2x active fin with digital controls with Zero Speed ™. The yacht has a Quantum 150hp bow thruster.

As another outstanding example of Trinity’s world class yacht building capability, the Destination Foxharb’r Too has an ABS Maltese Cross A-1 Yachting Service, AMS, and MCA Compliant classification and is due to be delivered in early spring 2008. 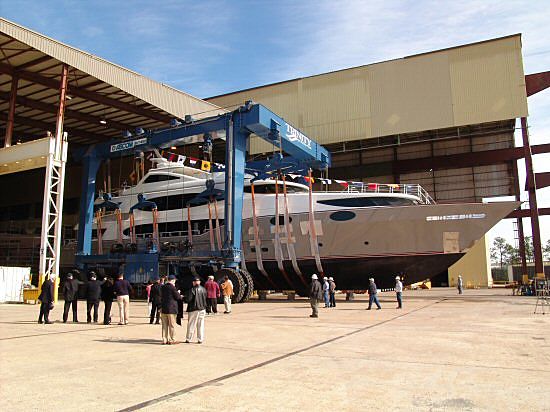