When a Dockwise Yacht Transport ship comes to port, people’s heads turn, especially when what looks like a floating marina “sinks” to unload its cargo of superyachts. Over the next week, not one but three Dockwise ships, at full capacity, will arrive at Port Everglades in Ft. Lauderdale, Fla., after crossing the Atlantic ocean with collectively over $407,000,000 worth of private, charter and dealer-owned vessels aboard.

When the 143’ Bennetti Idyllwild floats off the ship, it will head for Rybovich in Palm Beach for a full paint job; then it will sail to the Bahamas, where it will replicate a trip it made last year. “It is one thing to stay in a five-star hotel when you go somewhere, but to stay on a superb superyacht is another,” said Idyllwild’s Captain Andre Buhagiar. “Every day you do a little bit by boat and you make your way through the islands. Last year, our guests took jet skis and started from south of the Exumas and made their way up to Nassau while we followed.”

Buhagiar added that going on Dockwise allowed the Idyllwild to cross the ocean in October, when normally a yacht crossing on its own bottom would wait until later in the season to lessen the chance of encountering dangerous weather. “Many things went into our decision to use Dockwise,” said Buhagiar, emphasizing that allowing the crew “a holiday” was also a benefit.

For the charter boat Paramour, a 140’ CMN design built in Cherbourg, France and managed by Fraser Yacht Services, a two-week break for the crew figured in greatly after 12 weeks of non-stop chartering in the Mediterranean. “The trip across would have been tedious—14 to 16 days with constant four-hour watches,” said Shaun Preacher, who is responsible for Paramour’s management and bookings. “The way the Dockwise ship loads is unique and a lot more practical and safer than going as deck cargo. It saves wear and tear and operating hours on machinery, engines, generators and crew.” 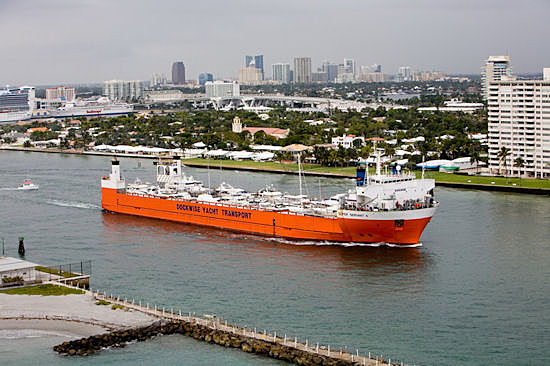 Preacher, like every good manager, has done his homework on Dockwise Yacht Transport, which he said Fraser Yachts uses consistently. “Dockwise is an international company; they have a record for the heaviest lift and carry operations. Dockwise Yacht Transport is just a small sampling of what the company does. They are extremely professional and take care of all aspects of safe operation.”

Several of the boats aboard Dockwise Yacht Transport’s Super Servant 3, Super Servant 4 and the Explorer are bound for the Ft. Lauderdale International Boat Show, which takes place October 28th through November 1st. Among them are the Ferretti Group’s Pershing 80, 92’ Riva Duchessa, and Ferretti 570 models, which have not yet been seen in the United States but will be showcased at the boat show in the exclusive Ferretti Group display at the Bahia Mar.