Publishing naval architect François Chevalier's original design for an out-and-out racer immediately reveals a great blend of today's most generalised trends for breaking speed limits as well as displays the author's ability to look into the breadth of working concepts in yachting history and formalise a proposal that could establish herself as a capable prize winner, advocating the scow bow as tomorrow's cornerstone in building racing yachts. 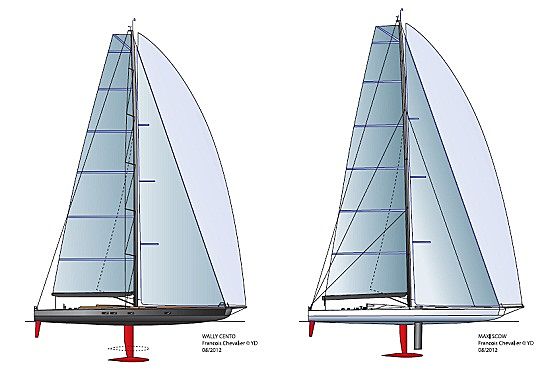 Mr. Chevalier writes: " I had had early etchings for these two 100ft projects, which I named MScow, laying on my draftboard since last summer, together with a Volvo Open 70 and an IMOCA Open 60". "When the Volvo Ocean Race announced that future editions would use a one-design, I decided to finalise the two 100ft sailing yachts: a Wally Cento and a Maxi Scow".

"The reason to design yet another Wally lays in the designation of the WallyCento rule itself: owners remain keen on the combination of comfort, performance, modern design and bleeding edge technology in a yacht. Even if the Wally Cento open box rule forbids canting keels and includes a minimum displacement figure, she remains true to the Wally essence which has begot its prestigious fleet: simple handling, automated sailing systems, utterly flush decks, light and minimalist interior spaces". 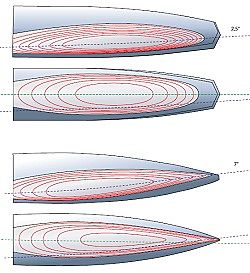 "The "Record" designation of the MaxiScow version, which features a more lightweight displacement and a canting keel, rid of all the modcons and automation usually presented in Wallys, targets ocean records and line honours in crewed races such as the Newport-Bermuda, the Fastnet or the Sydney-Hobart"

As featured in the wetted surface diagrams comparing the MScow concept with conventional monohulls when heeling, the key advantage of the MScow is her stiffness, sailing at an angle which would be three times smaller than a conventional yacht. On the one hand, the righting moment is a lot more efficient, whether or not she is fitted with a canting keel, and on the other hand, the keel remains in the centerline under sail: The result is the MSow's better ability in pointing to windward, by one or two degrees depending on configuration.

To improve the sailing platform's performance, the bowsprit can be orientated and the clew of headsails can be adjusted in the lateral plane.

"As far back as the 1970s, I made a concept for a crossoceanic windsurf designated for a double-handed Transatlantic race. As for many projects of this kind, the model is still hanging on my office wall. The idea remerged ten years ago when I wrote an article investigating the orgins of planing hulls. The craze which governed the American skimming dishes at the turn of the twentieth century, with waterline length as the only limitation, had given me the idea to develop an IMOCA Open 60 for the Vendée Globe single-handed circumnavigation race".

"I decided to develop a progressive chine-bilged scow, and instead of a pram bow, I proceeded to cut away the stem very significantly to avoid wave slamming as much as possible. By tapering the bow both in height and in width, shocks with head waves are dampened significantly and the scow skims the surface immediately and displacing as little water as possible".