Specialist Dutch refit yard Balk has embarked on two new projects. The 40.28-metre Royal Huisman sailing yacht Anakena will have a comprehensive overhaul of its propulsion system and hydraulics. And the 34-metre motoryacht Cornelia, launched by RMK Marine in Turkey in 2006, will have major work carried out on the interior and lazarette. “The fact that we can simultaneously cater for two such divergent refits shows the wide range of skills available at the yard,” says Managing Director Daan Balk.

The powerful centreboard ketch Anakena was winner of the 1996 Showboats award for ‘Best Sailing Yacht Over 36 m’ and has given great pleasure to her owners over the last decade. But even the best built vessels eventually need upgrading and no expense is being spared to bring Anakena completely up to date

The propeller shaft and propulsion installation will be totally re-engineered and fitted with a highly flexible centre link between shaft and engine. Two gensets will be expanded with a hydraulic pump in line with the crankshaft, which in essence requires a complete change of the hydraulic installation. Everything will be removed from aft in the engine room and fixed to the generators forward. Carbon shafts will also be installed and the engines given new shock mounts. In addition to this complex work, the Balk yard also has a long list of other refit and repair activities, ranging from a dent in the hull to varnishing the interior and renewing the airco units. 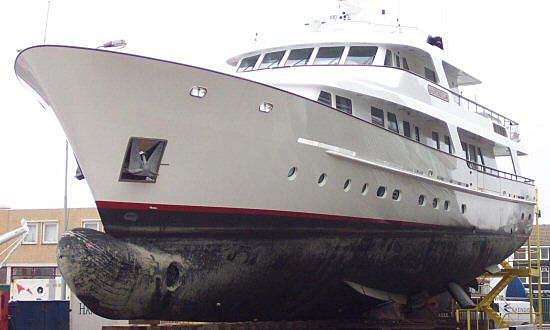 The work on the De Vries-Lentsch designed Cornelia (photo) is a follow-up to activities carried out by Balk during the winter of 2006-2007, which included bring the motoryacht to full Lloyds and MCA classification. Various adjustments will be made to the interior, the layout of the bridge and console will be changed and the air conditioning system requires major adjustments. There will also be a major refit of the lazarette and the launch installation for the tender, plus a range of electrical upgrades.

With various other projects in the pipeline, the Balk yard – which opened major new facilities in the Dutch harbour town of Urk in June 2007 – has established itself as one of the world’s finest refit facilities. Other recent highlights include the rebuild of the 46-metre Putty VI – one of the most radical refit projects of recent years. Launched as Turmoil in 1995, this pioneering expedition vessel was transformed by Balk into a luxury cruising yacht of the highest possible standard in just six months in 2007.