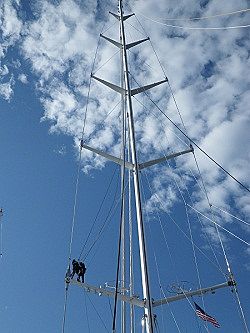 “We have worked extensively with both yachts since they were launched,” comments Jon Morris of Marine Results. “Following completion of the two most recent projects we reflected that we had just carried out work on the world’s two largest rigs in their particular construction category. We are pretty proud of that achievement and the way that it illustrates our capabilities.”

In the case of Salute, a 56 metre Perini, Marine Results carried out an extensive inspection after the team un-stepped the rig at the Perini Navi yard in La Spezia, where she was originally built. Marine Results then worked with Perini’s mast division to complete the inspection on the mast and rigging systems. Marine Results specialises in a range of non-destructive testing (NDT) techniques to check for concealed stressing and damage.

The second of the two record breakers m5 had her mast pulled out as part of a substantial one-year refit at Pendennis Shipyard in Cornwall. Marine Results was called in to unstep the rig prior to an extensive modification programme which is expected to last until the end of 2012. “Unstepping the rig was no small job,” said Morris. “The rig weighs a colossal 46 tonnes. To give you an idea of the size of the job, when we removed the boom vang, this alone was 9.5 metres long and weighed 900 kg".

“One of our strengths is our ability to deploy our teams around the world to carry out service work on dozens of the world’s most advanced racing and cruising superyachts,” concludes Jon Morris. Marine Results is based in Hamble, England and La Ciotat, France.