Sunsekeer confirmed that the first two Sunseeker 101 Sport Yachts on order will both be delivered to the South of France, ahead of the 2014 season. Hull No.1 has already completed the initial stage of production and has been removed from her mould at the Sunseeker International moulding facility in Portland Dorset UK, in preparation for the fitting of all the internal bulkheads and engine mounts (photo here). She will be then towed to Sunseekers spiritual home in Poole for final fit-out, before a launch in May 2014. 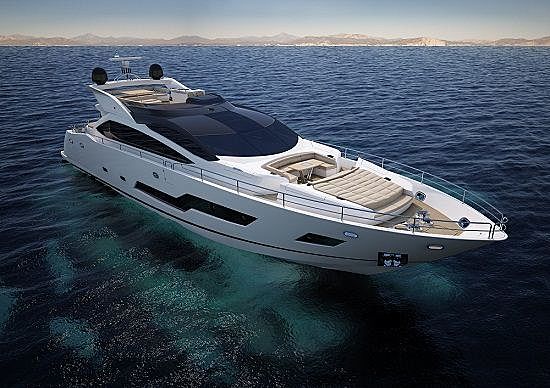 Promising to be one of the most progressive Sunseekers built in recent times and featuring a black hull and distinctive interior, the first boat will certainly be eye-catching. Harry Bristow-Holmes of Sunseeker London who is managing the build of the first boat states "No less than 300 bespoke changes have been made to the standard specification of the first Sunseeker 101 Sport Yacht by her discerning and existing Sunseeker owner. It is an immense pleasure to be a part of the process, and we are all looking forward to seeing the end result next spring".

Hull No.2, managed by James Wood of Sunseeker France, will follow shortly afterwards, and both boats will be delivered to ports in the region. Look out for a boat show debut at the Cannes Boat Show in September 2014!

There is no doubt that the Sunseeker 101 Sports Yacht is an extremely exciting new model, which exudes all the trademarks of the new Sport Yacht range and further enforces Sunseeker’s progression in the luxury performance yacht market. For more details, click on the RANGE tab at the top of the screen.