Once upon a time, at the 2011 Pinmar Golf Tournament, Cinderella and her two Ugly Sisters raised over €17,000 for a number of charities including Great Ormond Street Hospital . Whizzing around the lush greens on their drink laden carriage, the pantomime trio accosted unsuspecting golfers swapping booze for cash donations. 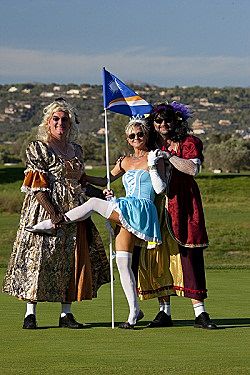 No strangers to the fairways of the Pinmar golf course, this is the third year in a row Richard Gardiner (Global Services) and Roger Horner (e3 Systems) have donned fancy dress for charity. Richard commented, “Both Roger and I would like to thank the competitors, captains and crew for their generosity, good humour and fantastic sense of fun. We are delighted with the money raised - it makes the wigs and corsets worthwhile!”

The highest donation of the two days came from Captain Richard Hutchinson of Rasselas who generously paid over one and a half thousand pounds for a small Coca Cola, with Neil Sherman from Sensory International, Rob Tobin from Dohle, John Masters from Le Mirage and Derik Wagner from MTN also donating substantial sums to the Ugly Sisters.

After three years of sister-ship, previously posing as nuns and nurses, Richard and Roger have decided to hang up their stockings and hand the keys of the carriage over. The buggy was auctioned off for the princely sum of €6000 to Lee McGuire of LM Marine and David Ireland of Deckers.

David comments, “Deckers are looking forward to the challenge of raising money for the charity together with LM Marine over the coming years. Both Lee and I agree that there will need to be some serious brain-storming to follow the fantastic achievements Richard and Roger have made during their time as the Ugly Sisters but we are ready to rise to the challenge and looking forward to it. Watch this space...”

Cinders (Amanda Butler of Savills, Mallorca) and the Ugly Sisters were delighted to receive a standing ovation from over 900 guests at the annual PINMAR dinner in recognition of their fundraising efforts. And the three fairy tale fundraisers all lived happily ever after.