Selahattin Üldas of Turkish yacht design company Üldas Design has recently revealed a rendering of the company’s latest project, which has been developed for a well known client. 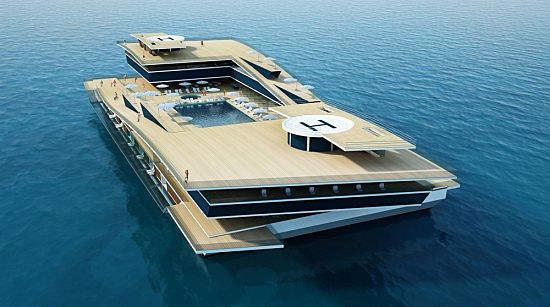 The project required Üldas to design a 130 metres catamaran platform with a 50 metre beam, with the look and feel of a futuristic, luxury resort or hotel. As such, the amenities on board also reflect this resort style, and include multiple helidecks, quality restaurants located both inside and outside, several large swimming pools, a dedicated concert and dancing area, cafes and seaside cabins.

Founder of Üldas Design, Selahattin Üldas, comments on the design, stating, “I decided to design the platform in a way which loops from front to back, top to bottom. My aim was to design a resort which looks like a mega structure both from the inside and from the outside.”

Established in 2012 after working with important Turkish shipyards and companies, this 130 metre superyacht is the first of many upcoming projects for Üldas in the near future.