During a mere routine pre-sale boat lift, Monaco Marine's engineers noticed a major failure in the propulsion system of the 59 metre superyacht Ulysses (now called Grand Rusalina). They immediately suggested a deeper diagnosis test and unmistakably found that the whole transmission system was damaged. In front of the efficiency and perspicacity of our engineers, the captain and the buyer’s representative asked for a quote in order to carry out this repair.

Less than three days were necessary to make a complete diagnosis and a quote and work schedule with a firm launch date, set at the end of January 2014, only 60 days after Ulysses reached La Ciotat. 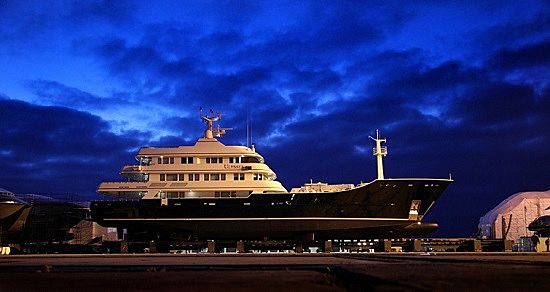 "The whole Monaco Marine engineering team headed by Cyprien Milhe, in charge of this unexpected mission, worked very hard to offer a quick solution to meet the customer’s needs, the Lloyd’s regulatory requirements and a tough schedule with no possible delays! Each step of this repair was supervised and analysed in this view", Monaco Marine commented.

"Here lies our second technical achievement, we were able to meet the deadline despite the complexity of works. The intervention consisted in a complete realignment of the propeller shafts and checking some bearings, axles and other parts at the hundredth of millimeter that we controlled, modified and even machined in our own precision engineering workshops. Many vibration tests were made during the whole process and because our engineers are approved by most major certification organizations for complex operations like applying the engine Chockfast process, we were able to rapidly achieve all these works in-house in keeping with Lloyd’s requirements".

"We are proud that Monaco Marine teams, thanks to their expertise and total commitment to the client’s satisfaction, have won this challenge while meeting the deadline: in less than 60 days, Ulysses is cruising again, ready for her future owner".