The British multihull specialists, Shuttleworth Design, has launched project MARS (Mayflower Autonomous Research Ship), whereby the company is attempting to create a fully autonomous unmanned vessel to cross the Atlantic Ocean. The event date has been set for the year 2020, marking the 400th anniversary of the original crossing of the Mayflower from Plymouth, England, to Plymouth Rock in Massachusetts in USA. 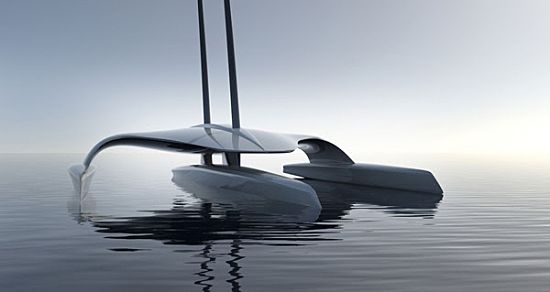 Being developed in association with Plymouth University, MARS will be a state-of-the-art vessel over 100ft in length, able to sail unmanned with an unlimited range by relying on solar technology to power its propulsion system. She will be fitted with a two-masted soft sail rig enabling MARS to reach a top speed of 20 knots, and capable of sailing with one or both sails hoisted. Shuttleworth Design is known for having designed the superyacht Adastra project.

John and Orion Shuttleworth comments, "A trimaran was chosen because it provides the most efficient hull form for low speed motoring. The hull configuration developed from a requirement to reduce windage, while keeping the solar array sufficiently high above the water to reduce wave impact. Without the need for accommodation, the centre hull has been kept low to the water and the wings and deck are separated and raised above on struts. This also allows waves to break through the vessel and significantly reduces roll induced by wave impact.”