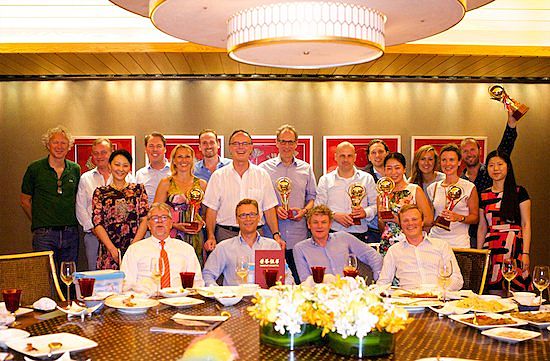 Established in 2014, The North European International Superyacht Awards are the most coveted trophies in the superyacht industry. With the support of six of the world's leading shipyards - Amels, Feadship, Heesen, Lürssen, Oceanco and Royal Huisman, the 2014 prize giving took place in cosmopolitan Sanya, one of the greatest small cities in the world. From its Rendezvous to its world-famous-yacht-club, rich in culture with a modern and relaxed ambience, Sanya is one of the most romantic and beautiful cities in China.

Combining a glittering awards ceremony with a gala dinner and dance, the Awards-dubbed the "Oscars" of the superyacht world - are attended by an elite invitation-only guest list of superyacht builders from around the North of Europe and the most influential players in the superyacht building industry.

In total six categories were awarded, and the winners are:

A big thank you goes to the judges Maarten Janssen (SuperYachtTimes.com) and Jeroen Sirag (Holland Yachting Group) and to the Sponsors Marlous van Rooijen (FairPromotion) and Yuri Veldhuizen (Hypsos).