New exclusive photos showing Sailing Yacht A with all three masts in place have surfaced, indicating that the attachment of the booms are likely to follow next. The new images leave room for speculation as to what on board features Sailing Yacht A will exactly have. Sailing Yacht A is currnelty underconstruction at the Nobiskrug shipyard in Kiel, Germany. Just last month the project was confirmed as the 142.8m Sailing Yacht A, built for visionary owner Andrey Melnichenko, owner of the iconic 119m superyacht A. 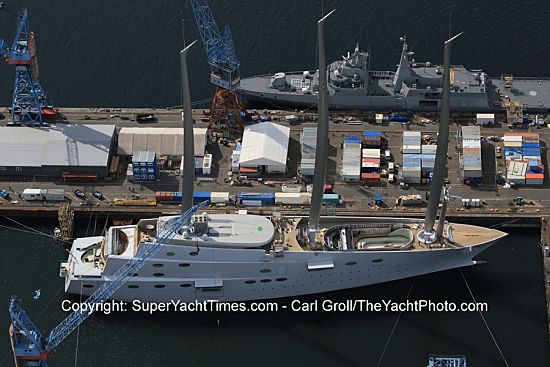 Sailing Yacht A will be powered using a custom diesel-electric propulsion system, utilizing two MTU 3,600kW diesel engines in tandem with two 4,300kW electric motors that are linked to a set of adjustable pitch propellers. This will allow her to reach an expected cruising speed under power of 16 knots with a range of 5,320nm and a top speed of 21 knots. Secondary propulsion comes from her 3 freestanding carbon fibre masts, constructed by Magma structures and delivered to the project in June this year. Delivery of the yacht is expected in 2016. 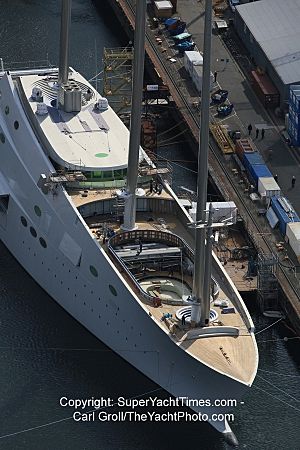