A little more than a year after the first presentation of the Fast Displacement Hull Form concept (FDHF, patent pending), to a scientific audience at the FAST 2009 Conference, followed in April 2010 by the first publication of the Heesen 6500 FDHF, Van Oossanen & Associates (VOA) have secured orders for the naval architecture of 6 more FDHF motor yachts. 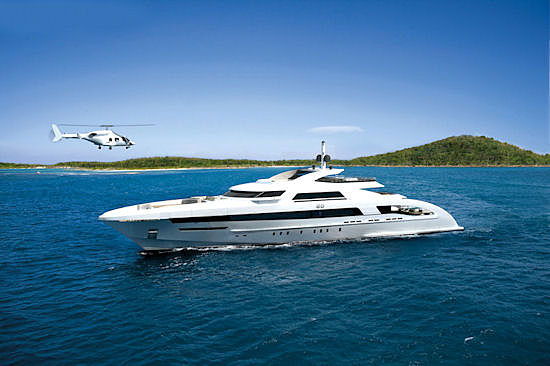 In July 2009, when Heesen Yachts were looking into the possibility of a 65 metre yacht as their new flagship, Dutch naval architects Van Oossanen & Associates had just completed the development of a break-through in hull design. Van Oossanen & Associates convinced Heesen to adopt this new hull form, the FDHF, because the new performance driven 65 metre was the perfect platform to use as a prototype for this hull form. The Heesen 6500 FDHF is currently under construction.

Efficiency and Flexibility
The FDHF offers a solution to the problem of having to develop different hulls for the displacement and semi-displacement modes of operation. The FDHF hull is efficient in both speed ranges and thus offers great flexibility when wanting a semi-custom series for a wide speed range because the naval architecture and engineering do not require changing when the speed requirements change - as long as the engine room is sized for both small and large engines.

An additional benefit of the FDHF is that it has significantly lower resistance values in the semi-displacement speed range than comparable hard chine hull forms. Often this is seen to be around 15% less resistance, which directly translates into lower required power levels to achieve the required speed. This superior performance at semi-displacement speeds does not compromise the performance at lower speeds. At cruising speeds the FDHF is as efficient as a well-designed round bilge displacement hull form. Model tests have proven the concept without a shadow of doubt.

On the Drawing Board
At the closure of 2010 six different designs based on the FDHF are on the drawing board at VOA. Two of these are smaller motor yachts: the Rivocean 1900 and the Storm 72, ordered by Dutch yards. Both of these have a maximum speed of well over 20 knots, and are required to be exceptionally fuel economic at lower cruising speeds.

Another two designs of these are 50 metre, 500 GT motor yachts: a fully custom yacht for a private client, and the lead vessel of a series of semi-custom yachts for RMK Marine. The first 3 of these yachts are to a concept designed by Omega Architects, while for RMK Marine both Omega Architects and Espen Oeino have prepared a design. The Ghost Yachts series (G180, G180V and the G180H) are also under development.

An exciting new FDHF project that has come just before the end of the year is a 73 metre motor yacht, also for a private owner. Furthermore, a number of yards, including some of the top yards in The Netherlands, as well as abroad, is currently considering the FDHF for their new designs, as a step up from current technology.

Further Refinements
Meanwhile Van Oossanen & Associates have not stopped the development of the FDHF. The concept has been refined further since the first design in 2009. Research at VOA is now focused on optimizing the FDHF for a vertical stem configuration. 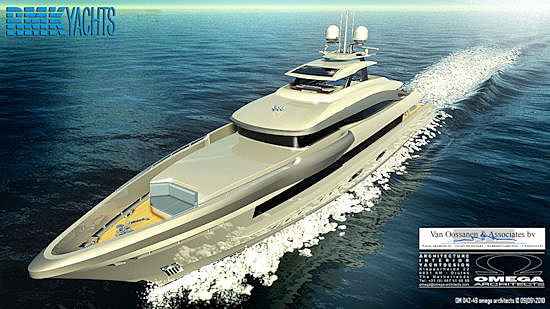 For this, and for other general hydrodynamic optimization work, VOA is developing a fully automated optimization routine which features the Friendship Framework as a parametric modeler and optimizer, in combination with the fully viscous RANSE solver ISIS-CFD from Fine/Marine. Further model testing will take place in the course of 2011.