A collaboration between Van Oossanen Naval Architects and designers Federico Fiorentino (exterior) and Cristiano Gatto (interior) has resulted in an exciting new project that further pushes the boundries in what is achievable in terms of onboard guest space on a modern superyacht.

The project is based on Van Oossanen’s new Fast Displacement XL hull form, which is an evolution of their proven Fast Displacement Hull Form (FDHF). The newly developed concept is designed to offer clients the longest possible waterline length in the respective 22, 300 and 500 GT categories. This approach has its advantages according to Perry van Oossanen which states that by increasing the length by 20%, the new design will result in 10% more interior and up to 40% more exterior deck space. “So it is possible to have a 45+ metre yacht, reaching close to 30 knots, with a 6ft draft, for less than 300GT.”

The exterior design of the vessel is made to match these performance credentials according to Fiorentino: “I gave this yacht a contemporary sleek and sharp look that perfectly combines with the lightness of its generous open spaces. An aggressive attitude reflects the high-performance hull that lies below the waterline.” Inside, accommodation is split across five staterooms on the main and lower decks. For this sub 300 GT design, six crew members will be housed in three en suite cabins in the forward part of the ship. 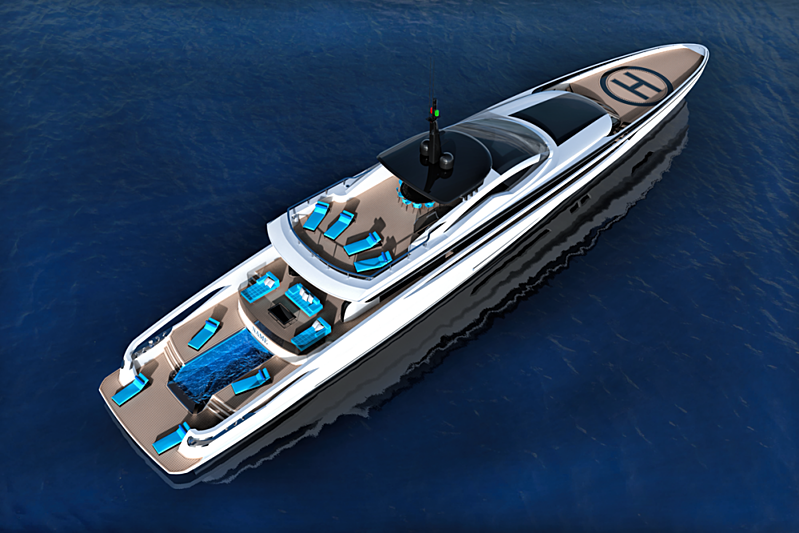 Key features include a superyacht helipad on the foredeck, an aft-deck infinity pool and a side-loading garage that is large enough to house two Jet Skis as well as a 6.25-metre tender. Van Oossanen adds that this design could be built from an aluminium hull and superstructure to Lloyd’s and ABS standards, compliant to LY3.

The XL-300 will be taken into sales by Thom Conboy of Ocean Independence. “It’s really exciting to be working with Van Oossanen, Fiorentino and Gatto on such a cool project which has an amazing potential for the US market,” he commented.