Paul Alan Yacht Consultants Middle East (PAYC-ME) have been appointed Central Agents for the 64.60m M/Y Van Triumph. The superyacht has the ability to withstand extreme sea conditions and her hull exceeds Lloyd’s 100+A1 rule in most areas and has passed Lloyds survey as of June 2009. 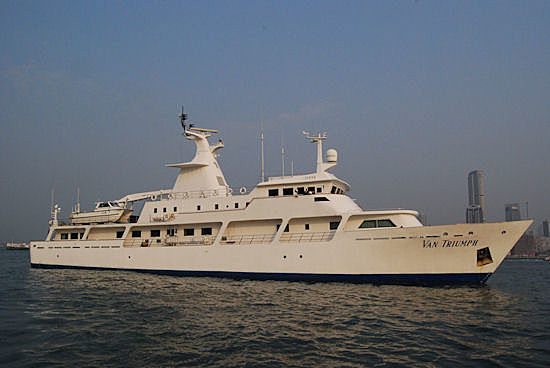 Van Triumph has a high bow and free board with the capability to load 122 tonnes (which could be converted to additional fuel tanks or accommodation) of ballast amidships to decrease the centre of gravity. The double bottom is divided into 26 compartments port and starboard. Longitudinally the yacht is subdivided into 10 watertight compartments. The ship is built to a 3 compartment standard and also has a double hull with 1m separation in the area of the engine room and control room. Each side of the double hull is further sub-divided into 4 compartments. The accommodation and wheelhouse areas are bulletproof having been built for areas in the world where piracy remains a threat.

Van Triumph has an estimated range of 15,000 miles at 11 knots. Total fuel capacity is 260,000 litres. There is also a provision for 5,000 litres of tender and toy fuel. Very large refrigeration areas allow for long voyages without the need for re-provisioning. A stainless steel tank gives 17,000 litres of drinking water with the capacity of making 20,000 litres per day. The end result of this is a significant vessel, which has enough capability for extended cruising in remote areas. The yacht could also be used as a Yacht Support vessel to an owner’s larger yacht. Captain Alan Hagg of Paul Alan Yacht Consultants concludes “Van Triumph is the Hummer of the Seas”.