The following video has recently been released from MC Yacht and Ocea of their collaborative superyacht project, the 44 metre Nemo. The all-aluminium yacht is the result of a close collaboration between the renowned designer, Fulvio de Simoni, Aldo Manna of MC Yacht & Co and the French shipyard Ocea. She is part of a brand new Nemo range, which will include three other models at 38, 55 and 65 metres.

SYT spoke to Manna recently, who shed some light on the birth of the project. Speaking of a close relationship with both De Simoni and the Ocea team, Manna says, “A couple of years ago, I understood that the market was seeking something new. I decided to join Fulvio de Simoni, and with him, develop this new boat. It is what the market is seeking. I went to Ocea and proposed the development of this new concept together. They agreed.”

The two brands have also announced the establishment of MC Yacht & Co. International, which will be the worldwide distributor for the line of boats. Manna continues, “Ocea didn’t want to develop a commercial sales department as far as private yachting goes, that’s why they decided to join us in this new partnership. We will be the commercial sales department as far as the new line is concerned. We decided to put money to creating a branch inside the regional MC Yacht that will only be working on this new project.” 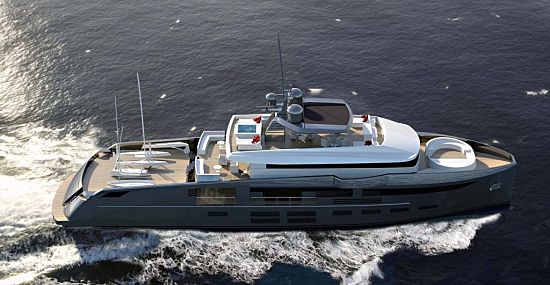 The all aluminium Nemo will be fully customisable, says Manna, and will feature a deep keel, relatively narrow beam and vertical bow. On board, one of her most impressive characteristics will be her extensive space for tenders and water toys, including a garage capable of housing a 7.5 metre tender, and space for a second tender, catamaran or sailing boat on a 130 square metre half deck. Cost effectiveness will apparently be a top priority, and the project is estimated to cost well under €20,000,000.

Manna introduced the new project at the latest Monaco Yacht Show at the end of last summer’s season, and reported a positive reaction from the industry.

The full interview with Manna is featured in the latest issue of the SuperYacht Times newspaper. Subscriptions are available here.