Vilanova Grand Marina – Barcelona is now a reality. The new marina specialising in superyachts and megayachts welcomes its first boats to coincide with the holding of Formula 1's Spanish Grand Prix. Large boats, mainly from the United Kingdom and Monaco, including a 60-metre yacht, have chosen the marina as a base for enjoying the competition and using the exclusive services offered to them by Vilanova Grand Marina – Barcelona including helicopter transfers from Vilanova marina to the Circuit de Catalunya at Montmeló. 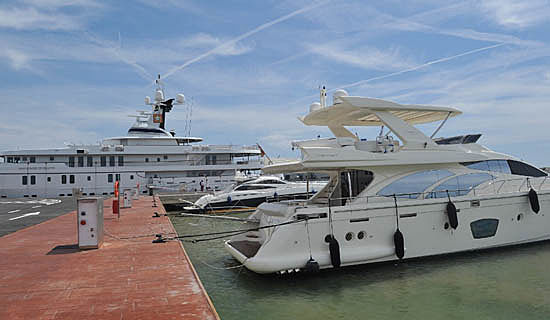 It is the first marina in the Western Mediterranean conceived and designed specifically to welcome and provide a full service for superyachts and megayachts, and it is one of the most advanced in Europe. With an initial investment of 33 million Euros, and after a construction process of just over two years, the marina has opened its doors in April this year with the mission of becoming a world leader in elite boating. It has 49 moorings for boats ranging from 25 to 80 metres in length and all the services necessary to attend to the requirements of captains, owners and crews, both concerning the boat and their own needs on land.

Vilanova Grand Marina – Barcelona integrates a port infrastructure and a technical area specialising in repair & refit projects, which provides a great added value to the marina. Its location, in the inner basin of Vilanova Port, surrounded by peaceful, clean waters not far from Barcelona and its international airport, also represents an important strategic value that translates into a great attraction for owners and captains.

Specialisation in large boats is indeed what makes it unique and different. Its most important features include a concrete quay structure to a depth of up to 7 metres, power and water supply for large boats, refuelling and collection of grey water at berth point, vehicle access to all moorings, private operations areas and private parking in front of the mooring, together with a helistop. The new marina will also have a Hospitality Desk, a restaurant, an English pub, a shopping area with 9 shops for boating companies, 66 store rooms and a car park with capacity for more than 150 vehicles.

The marina currently employs 15 people, including a harbourmaster, five sailors, three people to staff the Hospitality Desk and two engineers. There will also be another fifty people working in the dry dock once it is operational. Vilanova Grand Marina – Barcelona is also planning to generate about 200 indirect jobs.

The new marina undoubtedly constitutes a new tourist and industrial asset for the municipality of Vilanova i la Geltrú, its surroundings and Catalonia in general, and will represent an important source of business activity and wealth for the area. It is estimated that the crews of the moored fleet will number around 300 people who will require a series of services – hotels, restaurants and bars, health, property, etc. It must also be highlighted that the annual spending of the moored fleet could amount to 60 million Euros - with a 40-metre boat representing spending of about one and a half million Euros a year -, of which 80% is spent in the base port, according to sector estimates. An innovative project to provide a response to a real demand from the sector

Since sales began a year ago, Vilanova Grand Marina – Barcelona has sold 8 moorings, representing more than 30% of the moorings on sale, and it expects to double this figure during 2009. Of the total of 49 moorings, half are intended for sale and the other half for rent. Xiqui Mas, Chairman of the marina, stated: “We are very satisfied with the good reception the marina is receiving from among the owners of big yachts and the main boatyards in Europe.”

Xiqui Mas, born in Vilanova i la Geltrú, is the creator and driving force behind this project for a marina specialising only in large boats and bringing together all the necessary services. His experience and enthusiasm for business led him to detect the need for this type of facility to provide a response to a growing real demand. According to official figures, the fleet of boats longer than 24 metres will reach 5,000 units in 2011, translating into a growing demand for moorings and facilities specifically for this type of boat. Mas said: “Our marina will contribute to mitigating the current shortage of specialised facilities for large boats in Spain and the Western Mediterranean, particularly in the face of the sustained increase in numbers of megayachts and superyachts worldwide."

Marina Far Vilanova, S.A. is in charge of design, development, sales and management at the marina. The firm brings together three leading companies in their respective sectors: the construction firm Copisa (Constructora Pirenaica, S.A.); the prefabricated concrete manufacturer Hormipresa (Hormigones Prefabricados de España, S.A.) and the boating firm Varador 2000, S.A. The company obtained the concession from Ports de la Generalitat to build and run the inner basin of Vilanova port for a period of 30 years, until 2035. The concession also includes building and running the popular boating area and a new dry dock facility.

Vilanova i la Geltrú is the ideal setting because of the peaceful surroundings, the water quality, the good communications and, particularly, the proximity to Barcelona and its international airport. In addition, its optimum location in the Western Mediterranean allows marina users easy access to the most appreciated elite boating destinations, such as Marbella, Mallorca, Ibiza, the Côte d'Azur and Sardinia.

According to Ignacio Erroz, General Manager of the marina: “Vilanova i la Geltrú brings together all the requirements that are important to our customers: it is a town with an excellent range of culture, cuisine and tourist attractions but it is also quiet and well communicated with Barcelona and the airport.” He also said: “In addition to our specialisation in large boats, with everything this involves concerning technical and personal services, one of the aspects most highly valued by customers is the location in peaceful surroundings with clean waters near Barcelona and strategically situated in the Mediterranean”.

With this facility, Vilanova Grand Marina – Barcelona has established a new generation of marinas in Europe because of its infrastructure specialising in large boats, its wide range of technical and personalised services and the demanding security criteria it meets. The most advanced technical criteria for moorings in accordance with the dimensions and needs of this type of boat have been considered in the construction process. The facility has signed the ISPS (International Ship and Port and Port Facility Security) code and includes 24-hour monitoring and surveillance mechanisms using a CCTV system to ensure the security and privacy of its users.

Vilanova Grand Marina – Barcelona occupies an area of 111,000m2 distributed equally between water and land. The biggest construction challenge was the transformation of 33,500m2 of water area into land. Of the total area, 30,000m2 belongs to the technical area, which will be provided with the latest technological advances for carrying out repair & refit projects. To do this, Spanish and international companies specialising in large boats and auxiliary local industries will be contracted. The dry dock will have two large-capacity Travelifts, two painting booths measuring 60m and 40m in length and a workshop area with different dimensions. The project also includes the construction of a waiting and repair dock measuring 300 metres in length and a helistop intended to facilitate access to the marina.