Vilanova Grand Marina – Barcelona, the first marina in the Mediterranean specialising in superyachts, sponsored the ninth edition of the Captains Dinner and Awards, promoted by Fraser Yacht, celebrated last 24th September, at the Monaco Yacht Club.

This event is an annual meeting for captains and crews of prestigious yachts around the world and, for the first time, with the participation of Vilanova Grand Marina-Barcelona as a new sponsor in this edition.

At the beginning of the event the marina organised a tasting of Spanish delicacies, where the Spanish Jabugo ham focused all attentions. The ham was served with Spanish wine and other snacks. 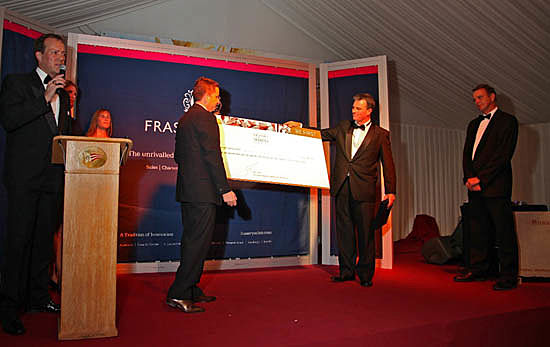 During the dinner, Xiqui Mas, Chairman of Vilanova Grand Marina – Barcelona, gave a special prize to the three finalists of the Captains Awards, Captain Ashley Benns from the Coco Loco (Best Charter Crew under 40m); Captain Don Anderson from the Newvida (Best Charter Crew over 40m) and Captain Ron Wood from Paramour (Captain of the Year for 2009), consisting of a check exchangeable for mooring days in Vilanova Grand Marina – Barcelona valued in more than 9.000 euros each one.

Xiqui Mas stated: “We are honoured of being able to collaborate with Fraser Yachts in such an important dinner as it is the Captains Dinner and Awards because where we feel more comfortable is surrounded by captains and other experts from the sector”.