Despite the set-back of not being able to hoist any mizzen sails, Sojana managed to hold-off the rest of the fleet and win the third and final race of The Superyacht Cup Antigua 2010. Bucket ratings expert, Jim Teeters worked out Sojana's temporary sloop rating after they suffered a broken mizzen boom on the first day, and gave them a 4 minute start advantage over second starting boat, Rebecca and a 29 minute start on Visione. 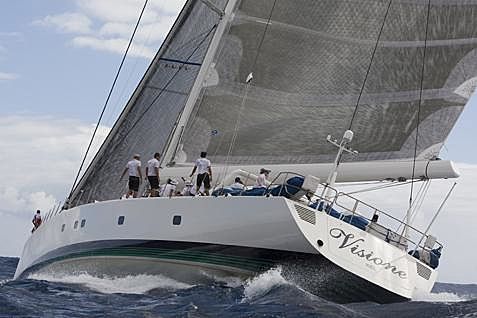 It was another windy day with plenty of action for these immensely powerful superyachts, flying full mains and maximum downwind sails; they raced around the 24 mile course in just two and a half hours. The breeze picked up on the final beat to the high 20's and Visione closed the gap on Sojana, finishing just 51 seconds behind her. An elated Peter Harrison, owner of Sojana, cheered as he crossed the line in first place, a much improved day out for him and his crew who have played as many rounds of golf on the island as sailing races in the past few days!

Ranger and P2 had a tight battle all day, crossing tacks several times. At one point P2 looked to be clear ahead, but Ranger gained on the last upwind leg, beating them by just over 3 minutes. Throughout the three days of racing the emphasis on sailing safe has been very high on everyone's mind and the superyacht racing protocol has been put to the test by the experts, without incident or protest.

High priority on the agenda of this friendly superyacht regatta, the social program has been a huge hit; from Pirates of the Caribbean fancy dress, to last night’s all important 'cook-off' between the yachts, the social competitions were just as fiercely contested as the sailing. Sojana's Captain, Marc Fitzgerald, prepared a magnificent grilled halibut and vegetable risotto while Mirabella V crew barbecued up a storm carefully supervised by the Captain 'Dr' Rocka.

The event closed with a grand Prize Giving Buffet dinner at the Copper & Lumber Hotel in Nelson's Dockyard.