Starting up a new shipyard in a busy market requires expertise, experience and, above all, a competitive product. Reale Yachts in Pisa has all three. 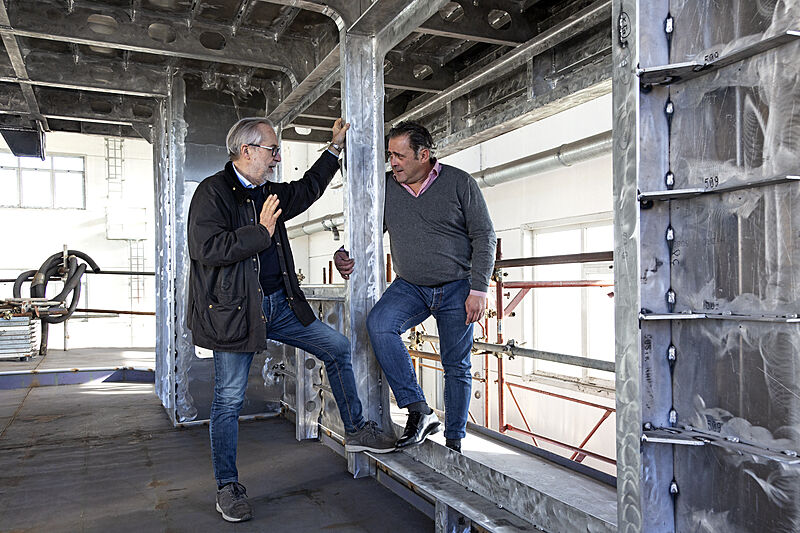 Photo: Justin Ratcliffe / SuperYacht TimesNico Laude, the charismatic yachting consultant behind Reale Yachts, has lived and breathed boats for the last 30 years. Having worked on the sales teams of some of Italy’s leading yacht brands, he co-founded the WHYKO and Phi Yachts brokerage firms. But it was only after he set up Phi Lab, a refit and storage facility in Pisa, that the idea of building new began to take hold.

“The whole idea of opening a new-build shipyard started by accident,” says the CEO of Reale Yachts. “Tommaso Bini, the son of Guido Bini whose family owned Cantieri di Pisa, was working with me at the refit yard and we had long discussions about the market and the boats we’d like to build. These chats led to an idea and a long process that took nearly three years before it was put into practice.” 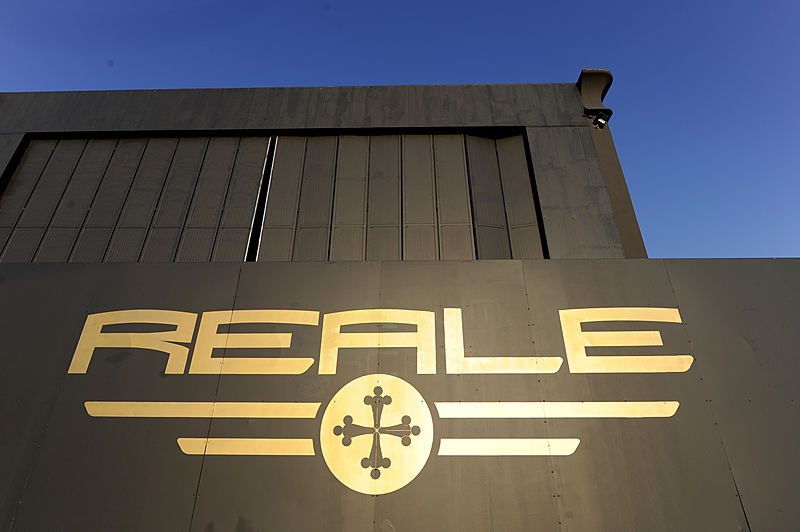 Photo: Reale YachtsOne of the first steps was to engage the designer Marco Casali to flesh out concepts for a series of compact yet rugged explorer yachts and supply vessels. Hydrodynamics specialist Francesco Rogantin was taken on to optimise the naval architecture and engineering. Veteran boatbuilder Guido Bini came out of retirement to join the nascent team and he was joined by Simone Marconcini, formerly with Nautor and Logica Yachts.

Backed by these experienced and expert managers, Laude signed up a knowledgeable owner in the market for an expedition yacht “without borders” for the first 32-metre Pacifico explorer before the brand had even been formally established. The keel was laid in July last year with delivery scheduled for spring 2021. 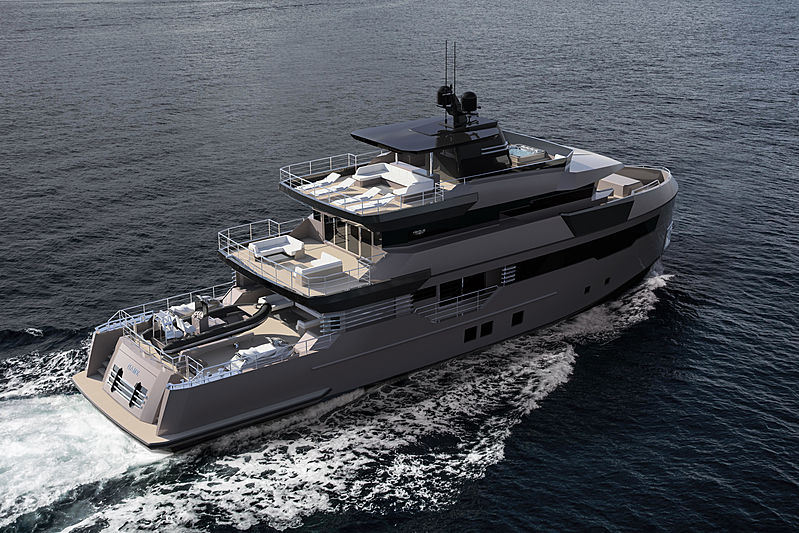 “Nico was very clear from the start what he wanted to create: a long-range, seaworthy vessel with purposeful lines based on solid construction and engineering,” says Casali. It is no coincidence that in Italian reale has two meanings: ‘royal’ and ‘real’, and the shipyard’s name reflects its mission to build yachts “the old-fashioned way” with quality as the starting point.

“The important thing is not to cut corners to save money but to build the best product we can,” says veteran boatbuilder Guido Bini who grew up at his family’s famous shipyard. “I remember my father always said that all boats look beautiful when they’re finished, but you have to look behind the scenes and understand how they’ve been built to understand whether there the quality is there or not.” 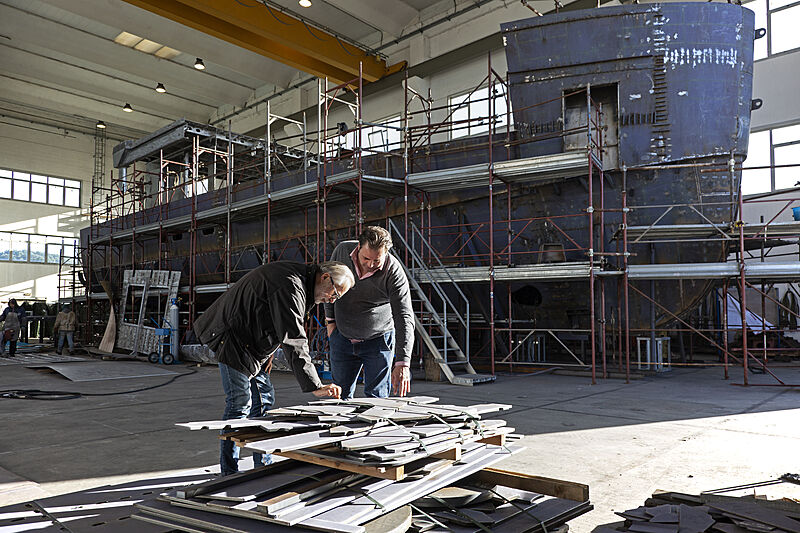 Photo: Justin Ratcliffe / SuperYacht TimesTo prove the point, Laude reels off the specifications of the steel and aluminium Pacifico 32 in build: the twin MAN medium-duty 880-hp engines and two generators of 80kW each; the cruising range of 5,000 nautical miles at nine knots; the oversized 220kg anchors; the refrigerated garbage store under the foredeck seating; the deck room for a 6.20-metre tender, jet skis or even a mini sub.

And the list goes on: “How many 32-metre yachts of just over 300GT have an air-conditioned control room in the engine room and interior ceiling heights of up to 2.17 metres?” asks Laude. “Just the other day we decided to build the frames for the hull portholes out of stainless steel and even the hard top on the sundeck is insulated against sound and vibration. While most shipyards are compressing their standard specifications, we’ve chosen to upgrade them.” 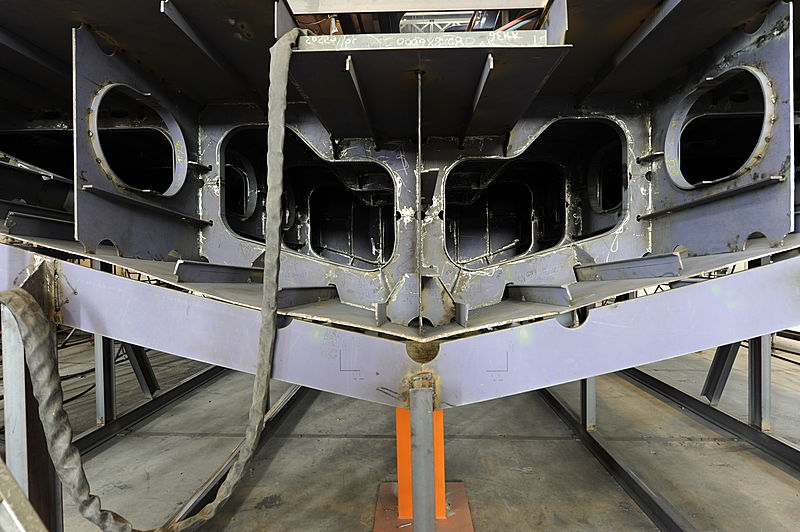 Photo: Reale YachtsThe expert owner’s business background is in shipping and the technical design by Francesco Rogantin, from the rugged hull to the piping and cable routing, reflects his desire for an explorer yacht conceived and built along ship-like principles. “Using extensive CFD analysis we came up with a beamy hull shape that has low resistance and optimal stability,” says the naval architect. “The owner wanted an ice-reinforced hull built in high-tensile AH36 steel to strict Bureau Veritas rules for unrestricted navigation. This required adding weight to the structure, but we were able to meet all the stability criteria without having to add ballast tanks.” 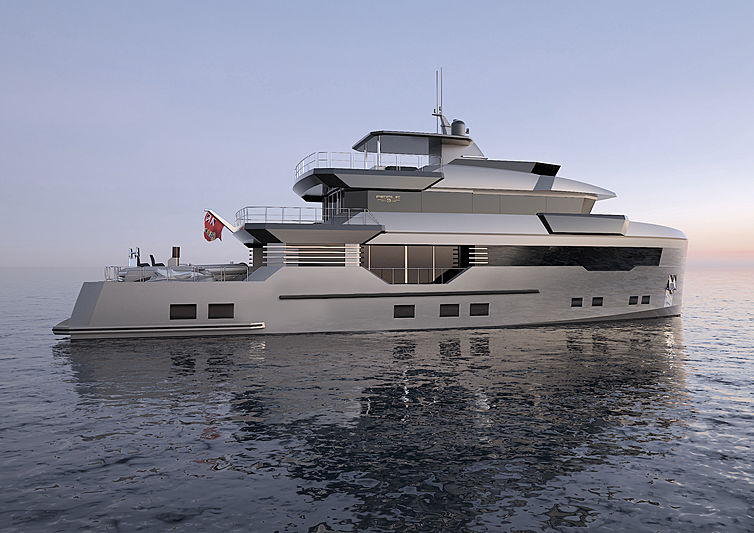 At the time of my visit to the new shipyard in Pisa’s yacht-building district, the final transom block had yet to be welded into place, but even missing the last few metres the hull looked much more imposing than its overall length suggests. Standing atop the plumb bow two stories above the ground felt more like being on a 50-metre vessel. Climbing down into the forepeak locker revealed the web of stringers, beams and stiffeners that reinforce the thick steel plating designed to brush aside brash ice. Laude initially recommended a commercial paint finish, but the owner has opted for a fully-faired hull. 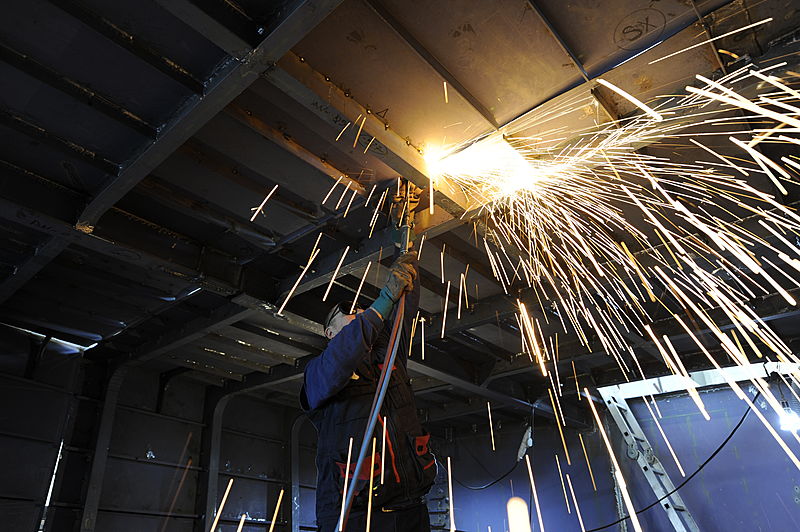 Photo: Reale YachtsThe custom layout responds to the owner’s needs and provides for a master stateroom on the upper deck with its own private aft deck, a VIP suite with private office and two large guest cabins amidships on the lower deck. There is accommodation for six crew on the lower deck and – unusually for a yacht of this size – a captain’s cabin behind the wheelhouse. The interior design, also by Marco Casali, will be in a contemporary classic style requested by the owner. 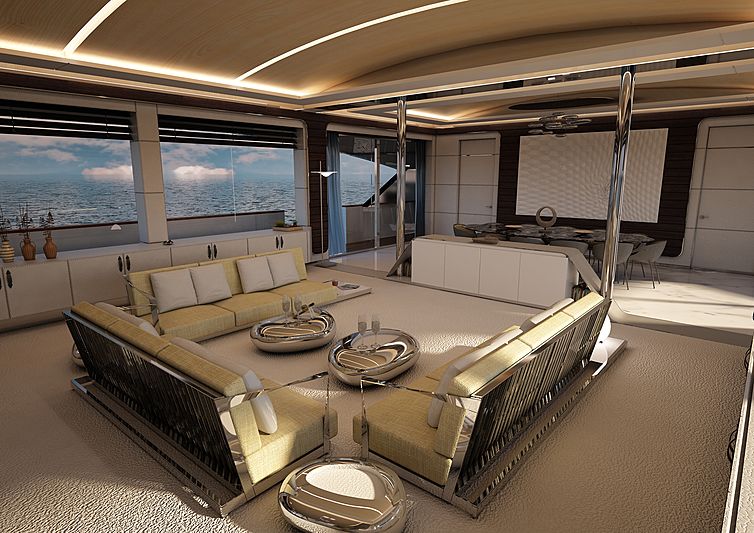 Photo: Reale YachtsThe transom beach club is equipped with a lounging area, sauna, day head and dive room. As the tenders and toys are stowed on the open aft deck, the main salon and dining area have sliding glass doors that open along the sides instead of the standard aft doors. The high-spec galley on the main deck has a large adjoining pantry. 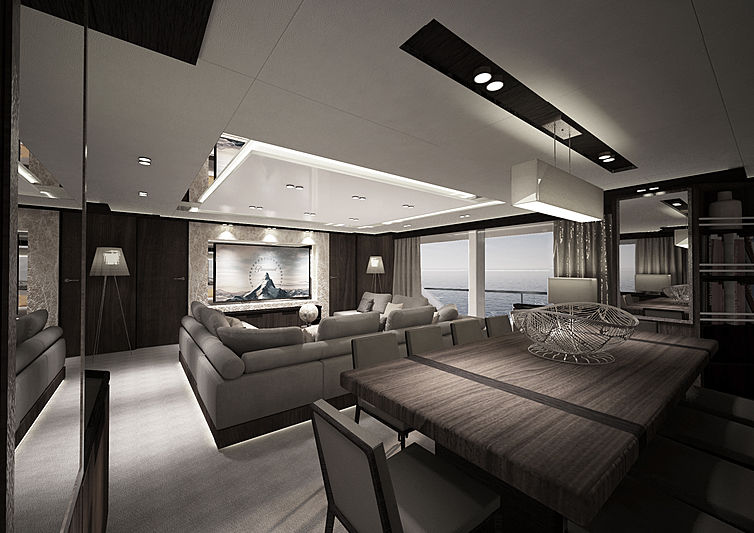 A defining feature of the design not immediately apparent from the renders is the absence of exterior staircases. This was a conscious decision as the yacht may well be used in northern waters and colder climes. In fact, access to the sun deck is via an interior staircase inside the mast structure, which also houses a day head.

Special attention has been paid to reducing noise and vibration to a minimum. This includes standard procedures such as elastic-mounted machinery and floating floors and partitions, but also care in routing toilet, shower and washbasin discharges. For reasons of noise attenuation at anchor as well as ease of maintenance, the compartments for the ABT electric stabilisers are in the engine room and not the lower deck guest cabins. In fact, contractual noise levels in the guest cabins are a hushed 47dB in harbour. 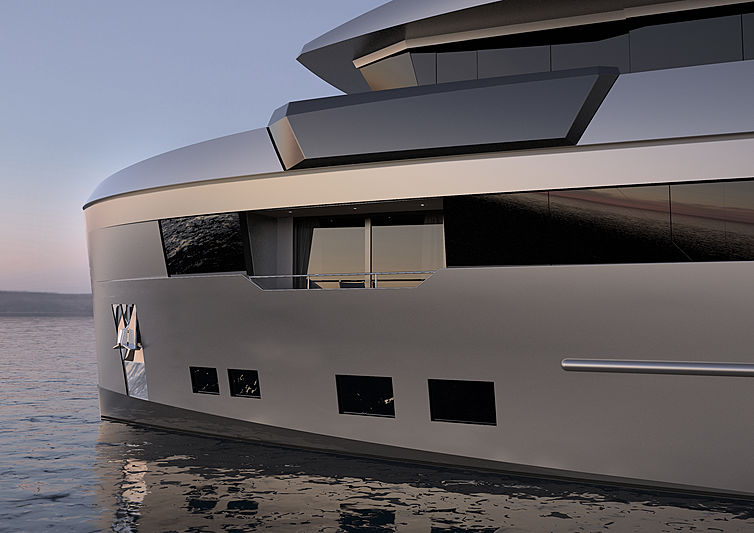 With the first Pacifico 32 due to launch in spring 2021, Reale Yachts continues to develop its other models from 28 to 50 metres, which besides the Pacifico line includes the Panarea, Lanavetta and Ombra ranges. Based on fixed technical platforms, clients can choose between steel or aluminium construction, or even one-off designs by other designers.

“There are owners out there who appreciate the faster build times of a series product, but they want more opportunity to customise their yachts,” says Laude. “The idea behind Reale Yachts is to bring back more choice and custom quality to a segment of the market that is dominated by limited options and standard solutions.”

Interview: Francis Lapp on Sunreef Yachts' rise from the ashes