Home > News > At the yard: visiting H01 as she approaches completion

It is always disastrous when a yacht goes up in flames, especially when the boat is brand new and just weeks away from delivery. This is what happened in 2009 when an electrical fire aboard a 52.5-metre Baglietto (hull 10202) destroyed everything except the steel hull. When the shipyard succumbed to debt and closed down the following year, it looked as though the hull would be consigned to the scrap heap. 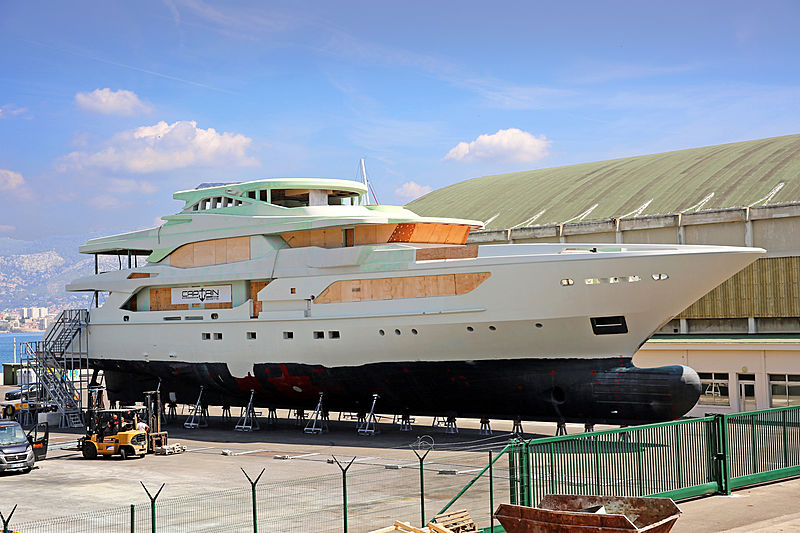 Most people are unnerved when ‘fire’ and ‘yacht’ are mentioned in the same sentence, but not the owner of Project H01 approaching completion at the IMS 700 shipyard near Toulon. The 56-metre yacht is based on the undamaged hull of the burnt-out Baglietto and how it ended up in France is something of a minor miracle, having survived not only the original fire but also two shipyard bankruptcies.

The Lloyds-certified hull was purchased by Mondomarine in 2013 and stood on the hard in Savona until a contract was signed in early 2016 with the current owner (who also owns 49-metre Glaze launched by Trinity Yachts as Lady Michelle in 2007) to create a new yacht based on the surviving hull. Work began on lengthening the aft section by three metres and building a restyled aluminium superstructure. A year later, however, the project ground to a halt when Mondomarine also ran into financial difficulties.

The owner’s team moved quickly to get the yacht out of the yard, and out of Italy, to avoid seizure during the bankruptcy proceedings. In the summer of 2017 the bare boat was towed to the IMS 700 shipyard in the south of France, initially as a temporary haven while other shipyards in northern Europe were approached to finish the yacht.

“I spent three months visiting yards in Holland, who variously quoted me 26 months and over 30 million euros to complete the build,” says Clement Gartner, the owner’s representative. “I just couldn’t understand those kinds of lead times and costs when we already had a hull and superstructure and engines and generators.” 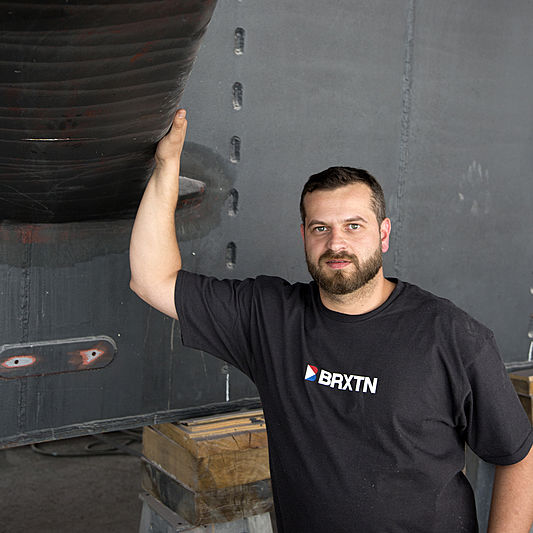 After consulting with the owner, Gartner decided to set up his own company and assume responsibility for finishing the build himself. Hull CNE (CNE stands for Creative Naval Engineering) is based on an open-book style of management whereby the owner is treated more as a business partner than a client and provided with the financial information to empower him to make better decisions.

“It’s the safest way today for an owner to protect his investment,” says project manager Mauricio Weiszberger, who was formerly commercial director for Couach. “It involves the owner in the day-to-day running of the project and provides total transparency of achievements and goals, as opposed to the traditional financial model based on a series of deposits.”

Gartner decided to stay put and rent space inside the IMS facility. He gathered a small team of multinational managers around him and is relying on local contractors to finish building the vessel. At the time of my visit in early April, the main machinery and gearboxes had been installed, piping and cabling were well under way, work had started on the interior and the first showcoat had been applied. The cocoon will be dismantled at the end of May for launching and H01 is due to make her debut at the Monaco Yacht Show.

Photo: Hull CNE“The owner has already taken his current yacht around the world, but this time he was looking to go further afield and would like to transit the Northwest Passage,” says Gartner. “He wanted a bigger boat with more volume and a lot of amenities for family use and charter, but didn’t want to stray much over 55 metres because of berthing restrictions.”

He certainly got more volume: the original Baglietto was under 700 gross tons, but following her reconfiguration and hull extension H01 is rated at a whopping 840 gross tons arranged over five decks, including an under lower deck. The sundeck is now enclosed by glass sliding doors and the aft section has been extended and reinforced to serve as a touch-and-go helipad. Set into the foredeck is a 4.5-metre pool with active current for swimming (the bulbous bow serves as a heated holding tank for the water when the yacht is underway).

She even has an extra observation deck, which required redesigning the mast to raise the height of the radomes (because H01 is based on a pre-existing hull, she is being built to LY2 criteria but will also carry Red Ensign Group Yacht Code notation, which updates the outgoing LY3 and PYC codes for yachts over 24 metres in length in commercial use).

Traces of Francesco Paszkowski’s original styling are discernible, but much of the superstructure has been completely redesigned by Gartner and his team. Although the forward-leaning windscreen on the bridge deck adds a hint of expedition-style purposefulness to the overall design, Gartner points out that the owner wanted “a world cruiser that didn’t look like an explorer; in other words, a luxury car rather than a commercial truck.”

H01 will be powered by twin CAT engines (2000kW @ 1600 rpm) for a top speed of 17 knots and a range at cruising speed in excess of 4,000 nautical miles. She is fitted with a capable 150kW ABT TRAC bow thruster and her Vosper Naiad stabiliser fins were increased in size by 40 per cent, requiring local hull reinforcements and more powerful hydraulics. Her Condaria AC system was also beefed up to deal with tropical climates. 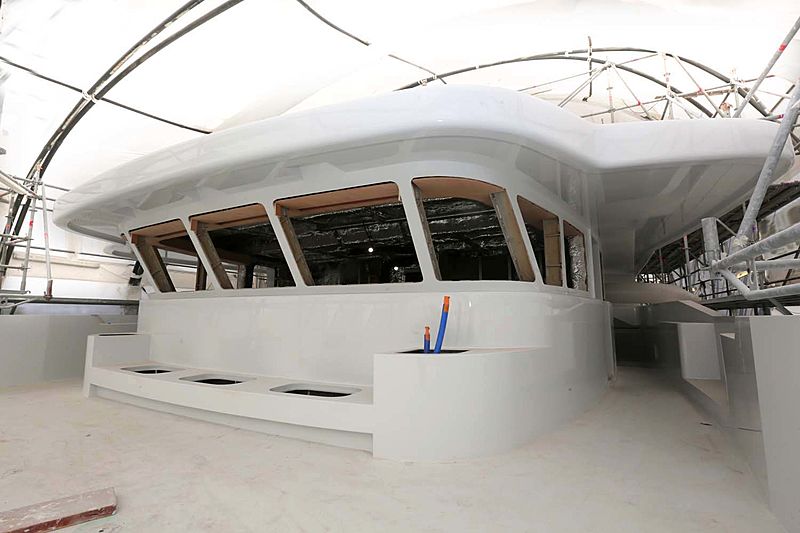 Photo: Hull CNEThe revised interior layout provides for four guest cabins on the lower deck, an owner’s suite on the forward main deck and a sixth cabin for staff or a pilot on the bridge deck, which shares a steam shower with the adjacent massage room. The enclosed sundeck will feature a bar and gym while the under lower deck houses cold and dry stores, a dedicated laundry and additional storage space.

Most importantly, special attention has been devoted to wheelchair access with wide corridors and doorways, under-deck drains instead of sills for exterior thresholds, and an elevator that links the lower deck accommodation with the sundeck.

“Very few yachts are designed with the mobility challenged in mind,” Gartner points out. “This has always surprised me as family charters often include elderly parents who might have difficulty moving around a boat. The challenge was to provide easy access for these people, but make it look like any other yacht.”

The interior design has been devised in-house in collaboration with the owner and his wife in a contemporary classic style. Based on satin-finished mahogany and contrasting off-white soft furnishings, the decor will feature exotic marble floors and backlit agate and quartz. The owner also requested a mahogany finish for the cabinets in the galley, which has been designed as a show kitchen with a teriyaki station. 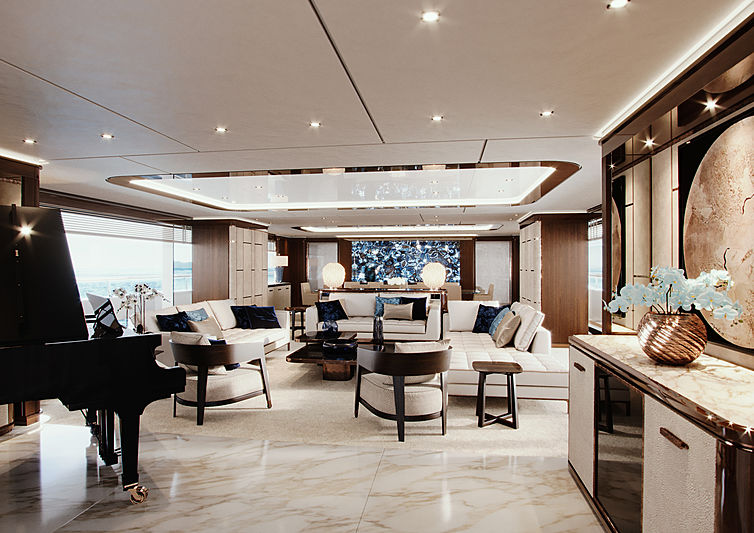 Photo: Hull CNEOnce superyacht H01 is complete, the Hull CNE team is planning to move on to the next project and an in-house design for a 46-metre explorer design is already on the table. To keep his overheads low, 34-year-old Gartner has no intention of setting up his own shipyard, preferring to keep the operation small and flexible so he can pack up and build anywhere in the world if required.

“We want people to sit up and take note and to do that we need to make our mark with H01,” says Gartner. “We’re a young team and I believe our approach and open-book philosophy will appeal to the younger mindset of emerging owners.”