The 53.5 metre ketch Nirvana, launched by Vitters Shipyard in Holland in October 2007, has won the Monaco Yacht Show Prix du Design trophy. This annual award for the most beautiful yacht was presented by His Highness Prince Albert II of Monaco and His Highness Prince Leopold of Bavaria. 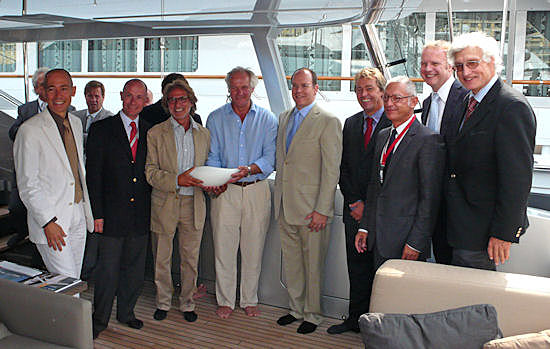 The ceremony took place on board Nirvana on Friday September 26. After H.S.H. Prince Albert II and H.R.H. Prince Leopold of Bavaria toured the yacht, they announced that they had chosen Vitters’ latest launch out of over 100 yachts as the most innovative, sophisticated and distinguished design.

Nirvana, a fast cruising ketch with a generous beam of 11.5 metre, was designed by Dubois Naval Architects. Her pivoting centreboard system generates a variable draught from a minimum depth of three metres to a maximum depth of ten. As the design process for the centreboard’s hinging mechanism was a key element of the project, Vitters Shipyard ensured that all calculations were carried out in-house. The minimum draught of three metre was achieved by developing a full-bodied hull form with generous beam and high ballast ratio.

This masterpiece of technology and design has a black hull, metallic superstructure and onboard areas for all weathers. Protected by the overhang from the flybridge and sides that can be opened or closed, Nirvana has a spacious alfresco dining area aft of the main deck salon. There is also another seating area starboard aft and a dining area on the flybridge where guests can sit or dine.

Other notable features of this elegant high-tech yacht include an all-glass bridge and an extravagant transom door that folds down to form a giant swimming platform. Nirvana carries two Castoldi jet tenders, located in garages forward of the wheelhouse and accessible via two giant hydraulic hatches that seamlessly merge into the deck.

In perfect harmony with the yacht’s clean external lines, the interior was designed by Josep Juanpere Miret of GCA Arquitectes in Barcelona. His design defines a contemporary and elegant style with materials and colours carefully chosen to suit the owner’s taste, provide warmth and variation of tone and texture, and to ensure aesthetic consistency.

The result is a spacious feel with an ingenious and luxurious elegance. Nirvana’s generously sized accommodations consist of five suites and five crew cabins. Furthest aft, the owner’s stateroom is stunning, with the unpainted, lacquered mizzen mast in the centre. The lounge and dining area can be separated by two retractable panels made of thousands of glass pieces. In the centre of this feature is a suspended transparent staircase that serves as a unique link to the cockpit.

By winning this award, Vitters Shipyard confirms its position as one of the most highly regarded superyacht builders. Each of the yard’s projects, from as Ghost and Mystére to Adéle, synthesise progressive design with proven performance and further refine what has gone before.