Vripack started their naval architecture & engineering activities on a 141’ Research Vessel Yacht for a repeat Owner and shipyard in February 2008. This full aluminum motor yacht is a joint effort between France-based JFA shipyard and Vripack and is their third collaboration on a yacht of this size. Now it is time for the parallel but separate constructed hull and superstructure to join forces. 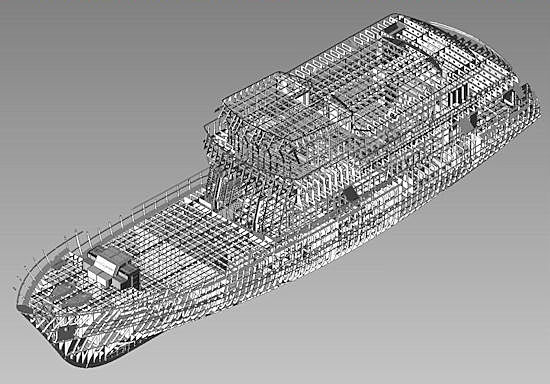 The current 122’ Research Vessel delivered in 2003, is actually the base for this new vessel. The new interior layout is quite similar and has minor changes incorporated which are based on the Owner and crew’s experiences. To give the engineer more space for maintenance and inspection of the various on-board machinery & equipment, the engine room is lengthened.

The yacht is built under BV and will be flagged following the Madeira rules & regulations. The structural and mechanical details are identical to the previous boat, as far as classification society allows. By using a full 3D environment for the design, the first structural modules were delivered within 6 months. Thanks to the application of these latest technologies, many efficient building methods are incorporated. Both the structural and mechanical system design ran as parallel as possible to ensure tank connections and bulkhead penetrations to be easily incorporated at an early stage during construction.

Vripack made the subcontractors’ building method requirements part of the building kit so they match their procedures and demands. Early June, the hull & superstructure will be delivered separately and joined together at the Concarneau yard. The expected delivery to the Owner is about one year later in 2010.

With this new yacht the Owner will have the freedom to navigate without any restrictions, and thus explore and admire every part of the world.