AlumerciA, an award winning 38m Vripack Explorer, arrived in Sneek on Thursday 18th June. This full aluminum yacht, built in the Netherlands and owned by a Dutchman, has traveled 105.000 nautical miles since she was launched eight years ago which can be compared to sailing around the world five times. 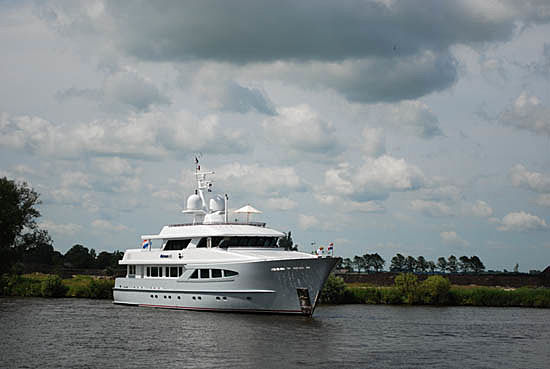 Recently she arrived in Rotterdam, where she was welcomed by an enthusiastic Vripack team and encouraged to visit Friesland and the Vripack Design Studio, situated in Sneek. The owner accepted the invitation and swopped the Brazilian, Alaskan and Bahama bays for the Frisian waters.

She arrived in Lemmer at nine in the morning and then steamed up the Prinses Margriet Canal towards Sneek to arrive at Vripack at eleven where she posed for a photo shoot and then docked in the Schuttevaartharbour because of her draft.

AlumerciA is currently for sale. To view her, and other luxury yachts for sale, visit the SuperYachtTimes.com Sales Pages.