“The wallynano idea was born after my office received several enquiries for classically styled cruiser/racer daysailers after the launch of Josephine 2 –says the designer Andre Hoek – The success of this carbon daysailer convinced us to develop the 60 meter Pilgrim ideas into a 36-foot boat: stylish, appealing, timeless and fast.” “Wally enthusiastically welcomed the idea because in this size range the modern lines result into an uncomfortable, not functional, and “poor” looking boat – explains Luca Bassani, Wally President 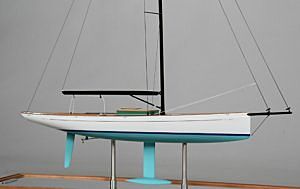 The challenge was to design an innovative boat in this already widely exploited size range: a completely new and unique project combining all the Wally features like the flush deck, the clean lines, the simple and easy handling.
The hull design has been extensively researched and tested with VPP’s and CFD analysis, and four CNC models were cut before the moulds were milled.

WallyNano features several innovations for this size range:
-she is traileable within the EU and fits into an open 40-foot top container;
-she has a lifting keel arrangement and a detachable rudder for easy trailing;
-she can be sailed single handed, with a self tacking staysail and optional Magic trims for the main and genoa sheets with control buttons on the tiller (the boat can also be sailed with manual or electric winches);
-she has a spectacular aft transom overhang and a plumb bow, creating a long water line with a magnificent retro look;
-she has a large open cockpit with integrated aft deck, creating a large sunbathing area;
-she has a flush deck in the Pilgrim type cabin top style with glass sides and an optional lifting cabin top to offer the inside-outside living concept.

The unique electrical system features a custom developed battery pack that is the main power source for driving the electrical propulsion unit. This unit is capable of giving an approximate eight hour range.

The sail plan includes a carbon spars package with a retractable bowsprit for the gennaker. Two keel options are available: Mediterranean version(2.80 m draft) and Solent version (2.20 m draft), and the exchangeable keel fin makes it easy to switch from one version to the other keeping the same bulb.

The interior layout features a double bunk in the bow and sofas in the salon extending into the pilot berth under the cockpit seats. The head is integrated underneath the companionway, while the separate head is optional and takes up one pilot berth. The interior styling is clean and simple with teak wood soles, exposed carbon hull lining, and white ceilings.

WallyNano is built in The Netherlands using the latest advanced composite technology by Victoire Naval Projects.

Snowwhite, the first unit of WallyNano, is currently under construction with the launch scheduled for Autumn 2007, while four more units will be in the water by spring 2008.

WallyNano’s owners will enjoy racing their monotype in the exclusive division taking part in the most important International regattas.

The aim of Wally and Hoek Design is to establish the WallyNano by Hoek Design as a new retro classic world wide one design class within three years from now.