Home > News > Welcome to the family: A closer look at Luxury Projects with CEO, Laura Pomponi

Italian design studio Luxury Projects is headed by an all round captivating woman. Laura Pomponi, founder and CEO of the Ancona based company, is about as Italian as you can imagine, with a bright, intelligent, good humoured personality and a tangible zest for life that is clearly reflected in the number of well-executed projects Pomponi and her team have successfully completed over the past eight years in business. 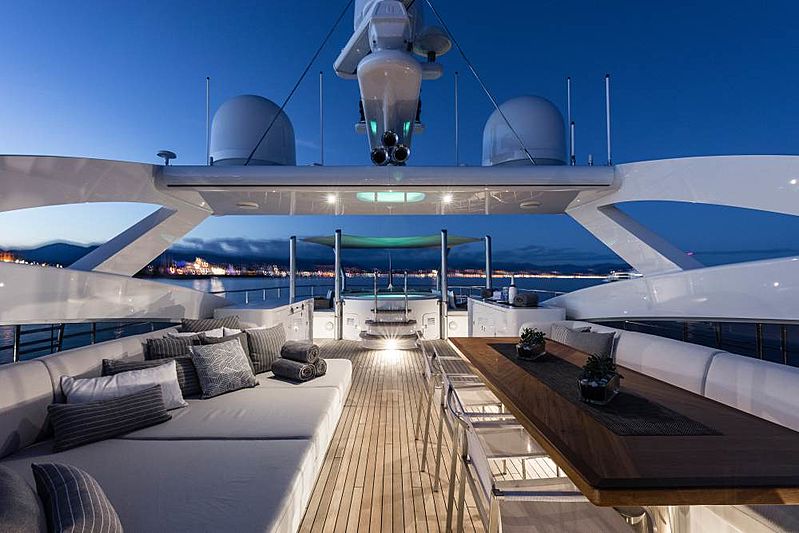 Pomponi grew up in Rome, where the qualities that attract people to her now forced her parents to send her to a monastery as a child in the summer afternoons to learn the art of embroidery and, well, keep her out of trouble. She laughingly tells us, “My parents had to keep me busy so I would behave myself! I was at the monastery every day in the summers to learn the art of complicated embroidery. When I was a teenager the tradition continued, and they sent me off to England to study English in these long summers to stop me from being naughty!”

A funny anecdote now, Pomponi’s feistiness as a child actually proved to be the key to learning skills that would ultimately be indispensable in later life. The benefits of learning English when involved in an abundance of travel and international business doesn’t need explaining, but the ability to really understand a behind-the-scenes skill of an element of interior design piqued an interest in colour, shapes, art and design that was already simmering beneath the surface for Pomponi.

Regardless of an artistic flair, Pomponi decided to study technical engineering, something in which she successfully continued in immediately after graduation working for the large Italian tech company, Telecom Italia Mobiles. Explaining the decision to take a decidedly more technical vocation, Pomponi says, “I grew up surrounded by fashion designers - including my grandmother. But I chose to study engineering because I am really passionate about maths and complicated equations. What I actually like about the construction of a yacht is the intricacy of the process. It’s like a DNA spiral, and I love solving these complex issues.” 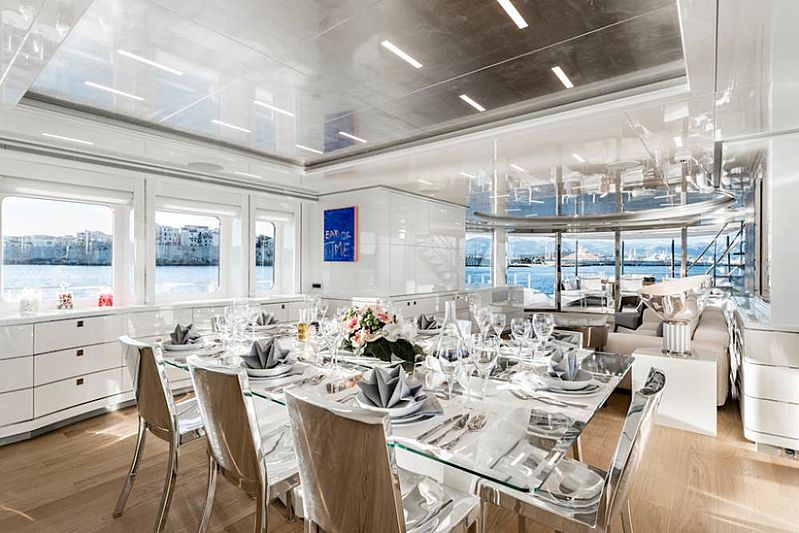 Travelling the world with the aforementioned position, Italy eventually beckoned Pomponi back to her shores, where Pomponi’s life would take a different direction with a position at the CRN shipyard. Explaining this drastic transition, she explains “I eventually decided to go back to Ancona. I was missing the sea and I was missing my family! CRN were enlarging their shipyard at that time, and knowing nothing about yachting aside from loving to be on the sea and loving sailing, they asked me if I was ready to start on production and go from there. I accepted the challenge and started with them as a Project Manager in 2002.”

It was several years later on a trip to Doha when she decided to put the entrepreneurial ambitions she had had since childhood into action - though it was a chance meeting with a Sheikh on this particular trip that propelled these ambitions into reality. Elaborating on the move from Project Manager at CRN to owner of her own design studio, Pomponi says, “I was in Doha with a friend who designs jewels. We were at a gala, and suddenly I was sitting next to a man who was a Sheik. We got talking and he asked me if I was an interior designer. I looked at him and said, ‘Sheik. I’m not but… I can do it.’ From then on we started to work together. He trusted me, and we started on some of his reception areas at his home. Little by little people in yachting started to call me for project management roles within superyacht interiors. An owner then rang me and asked me to do it all - that was the refit of the Mangusta 40 metre, Shane (ex. Ability) in 2008. The rest is history!”

Today, Luxury Projects is made up of a strong team of 10, all Italian, and all from various backgrounds and disciplines. Although the residential side of design is still something that is very present within the business, Pomponi’s heart really lies in superyacht design, something reflected in the fact that the business in split 70-30 between the two sectors. The passion for superyachts, Pomponi tells us, is connected with the challenge of the build, “The clients on both sides are very demanding, but the spaces on board yachts are very different to residential. The construction of a yacht does not allow for any mistakes, and every element is very bespoke.” 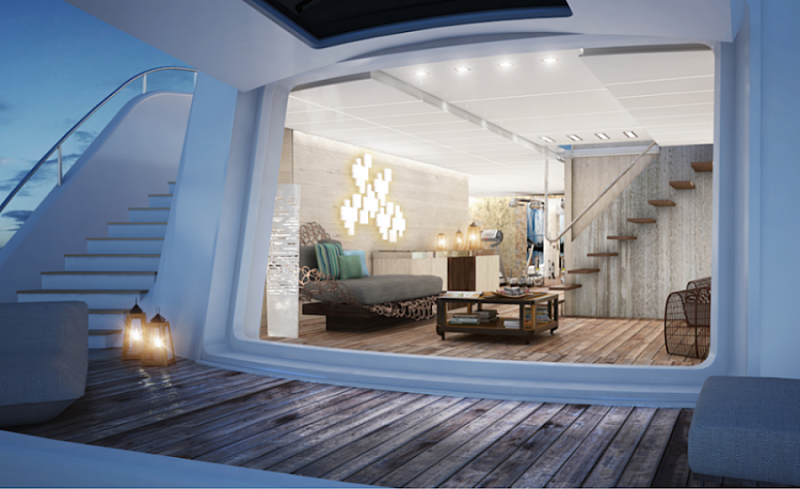 Just some of the most exciting projects the Luxury Projects studio has undertaken since their establishment in 2008 include the interior design on board the 43 metre Talal, the 34 metre Koji, the 39 metre Lady Azul, the 66 metre Route 66, the 43 metre Emotion, the 27 metre Rosey (ex.Yolo) and the interior refit on board the 59 metre Feadship superyacht Le Pharaon - no small feat for what is still a relatively new studio. So what makes Luxury Projects different and keeps clients continuously knocking on their door?

One explanation could be found in the fact that Pomponi and her team have a fresh approach to design, with a strong focus on innovation - particularly when it comes to lighting. This attracts a diverse set of clients to the table, Pomponi says. “My clients are almost all in their 40s, so my age. They have a background in innovation and technology. There are certain clients that use the yacht as a status symbol, but from the majority of owners that I deal with, they really want to enjoy the yacht.”

With this desire to really enjoy what a superyacht has to offer comes a distinct change within interior design. No longer is extravagant luxury the order of the day, but functionality - something seen within the - still rather secretive - new superyacht concepts (both of 70+ metres) Luxury Projects has undertaken with the team at Amels. Commenting on the projects, Pomponi elaborates, “The idea is to present these concepts to the new generation of yacht owners. The interiors are cosy, it’s not about luxury… these designs are for a client who really wants to use the yacht, and we’ve included state-of-the-art lighting and entertainment technology. The selection of materials we have used is designed for a real indoor-outdoors connection - for example, if they are scuba diving, they can come into the main saloon with a wetsuit - we’ve used outdoor fabric on the sofas.”

Aside from the exciting concepts presented in Monaco with Amels, current projects underway at the studio include the refit on board the 90 metre Nero, as well as a 42 metre new build motor yacht and the extensive refit of the 32 metre Saint Raphael, which is being lengthened to 42 metres. In regards to the latter two projects, Luxury Projects are also undertaking the exterior design. Although interiors are really the heart and soul of the company, this is something in which has been made possible by Pomponi’s diverse and skillful team. 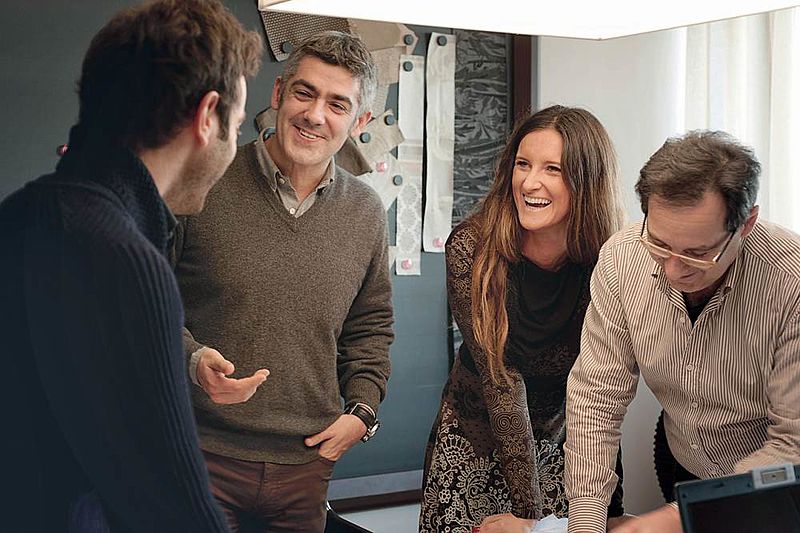 The team behind the studio is something Pomponi speaks proudly of. Though she is most definitely the boss, the way Luxury Projects is ran is not a dictatorship, or even a democracy, it’s a family, and Pomponi warmly told us of travelling the world with the close team, cooking up Italian feasts and enjoying each other’s company on the journey of the business. Clients are also commonly invited to join the Luxury Projects family in an informal but richly productive environment. Getting to know your client's personality and tastes are, after all, all part and parcel of delivering their dream superyacht design.

In terms of the future, Pomponi has dreams to grow the company bigger in order to better facilitate markets such as the US, but by no means desires to be the biggest studio in the world. She wants to maintain the great team she has and, of course, maintain control over the projects they undertake. With the aforementioned Amels concepts well received in Monaco, it seems as though the decision to go bigger or not will most definitely rest in Pomponi’s hands sooner rather than later.

The full article was featured in Issue XI of the SuperYacht Times newspaper. Subscribe now and never miss another issue!