Westport today announced the official launch of its new flagship, the Westport 50m. The 50m (164-foot) tri-deck composite yacht is the largest yacht produced by the Washington-based builder. 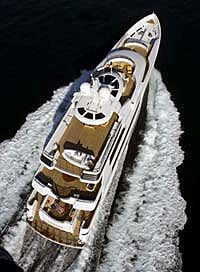 “The Westport 50 Meter is a first-class product that matches anything built elsewhere and that will come to be recognized as a significant step in American yacht building,” says Starkey, founder of Donald Starkey Designs and perhaps the best-known European designer of yachts.

The new Westport 50 Meter is both American Bureau of Shipping (ABS)-certified and U.K. Maritime and Coastguard Agency (MCA)-compliant.

Advanced materials and lamination processes give composites used in construction of the Westport 50 Meter high strength, reduced weight and superior impact resistance for excellent structural integrity. Thanks to their lighter weight, Westport yachts are faster and more fuel-efficient. In addition, composite materials aren’t susceptible to rust or galvanic corrosion, which means they require less downtime.

The Westport 50 Meter includes a full-beam master suite with separate office on the main deck, a bridge deck VIP suite with a private terrace and four luxurious state rooms, all complemented by a Donald Starkey–designed interior and decor.

All Westport yachts, including 5001, the first Westport 50 Meter, have been designed for production. “The Westport production process provides predictability,” says Phil Purcell, Westport’s vice president of sales. “Westport is a benchmark brand because of our ability to consistently tailor production boats to client specifications, on time and on budget.” A Westport 50 Meter takes under two years to produce.

At 164 feet long and nearly 31 feet wide, the new Westport 50 Meter was moved from Westport’s 120,000-square-foot boat-building facility at Port Angeles to the waterfront on
Feb. 6.

Within hours of being lowered into the water in Port Angeles, the 50 Meter was taking her first sea trial into the Straits of Juan de Fuca. After sea trials, the 50 Meter has met all expectations and is performing as designed.

Two Westport 50 Meters will be delivered in 2006. The next 50 Meter, hull No. 2, is scheduled for delivery late this year.

The Westport 112s and 130s are built in Hoquiam and Westport, Wash., and the new Westport 50 Meter is built in Port Angeles, Wash.